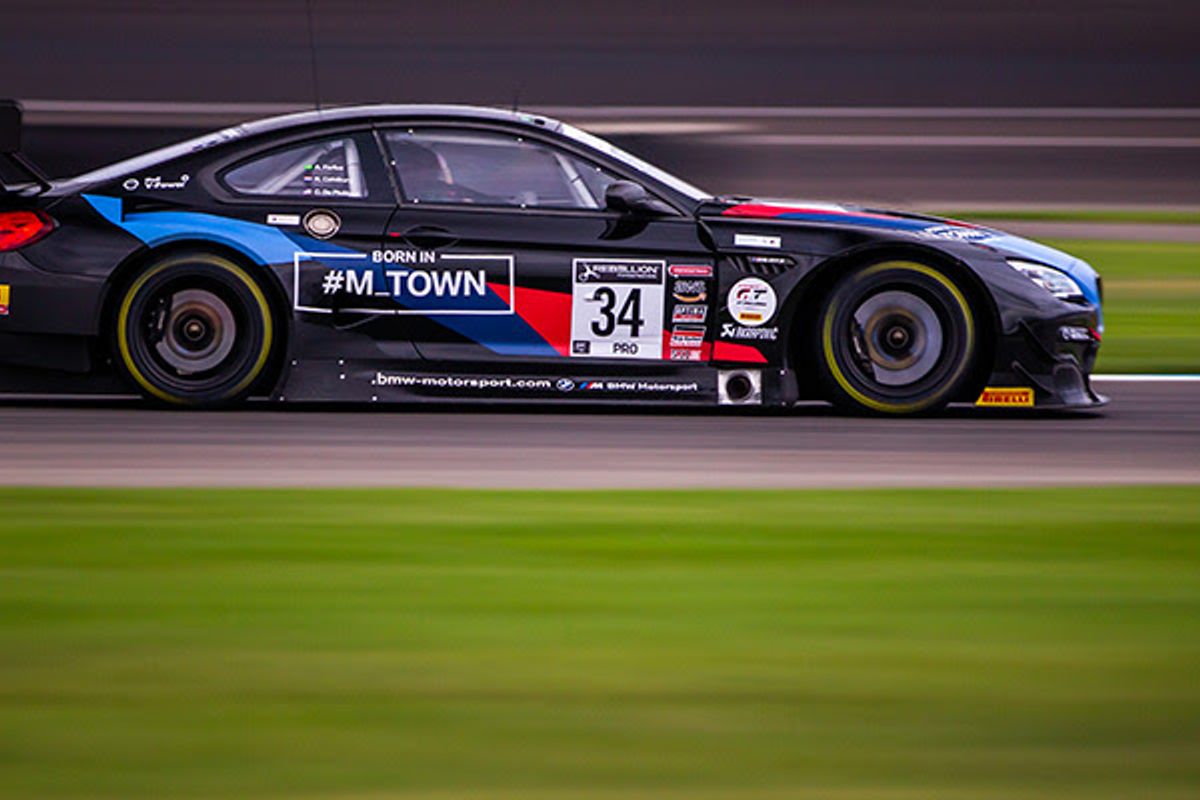 BMW will start tomorrow's inaugural Indianapolis 8 Hour from the front of the pack after Walkenhorst Motorsport driver Connor De Phillippi mastered the IMS Road Course in this evening's Pole Shootout.

The Californian lapped the iconic Brickyard in 1m23.318s to beat Jules Gounon (#7 K-PAX Bentley) in a battle of GT3's big beasts. The French driver was first to hit the top of the timing screens with four of the 15 minutes elapsed and looked set to clinch a maiden pole for the Bentley brand.

But there was a clear threat in the shape of De Phillippi, whose #34 BMW led the way in this afternoon's three-driver qualifying session. With five minutes of the Pole Shootout remaining he went second-fastest, then found even more time to snatch top spot from Gounon. The American remained 0.242s clear at the front to earn BMW its second #IntGTC pole after team-mate Augusto Farfus topped qualifying for Team Schnitzer at last year's Suzuka 10 Hours.

The championship-leading #7 Bentley crew of Gounon, Maxime Soulet and Jordan Pepper looked to have secured an ideal position from which to extend their points advantage, only to be hit with a 10-place penalty when it was found that the car's GPS was improperly installed. The grid drop will be applied to the Pole Shootout result, leaving the Bentley squad to start from 10th tomorrow afternoon.

Mario Farnbacher qualified the #30 Team Honda Racing machine third and will start second, continuing the fine form shown by the Japanese brand throughout today's running. The German ace left nothing on the table, briefly skating across the infield grass as he chased crucial tenths of a second in his NSX. Nick Yelloly was next in the #35 Walkenhorst BMW, followed by the #93 Racers Edge Motorsport Honda/Acura driven by Trent Hindman. The American booked his squad's spot on the second row of the grid with a very late effort that was within 0.15s of the factory entry.

Alessandro Balzan put the #1 Squadra Corse Ferrari fifth overall and at the head of the Pro-Am order. Ryan Dalziel was sixth in the #63 DXDT Racing Mercedes-AMG, followed by Max Root (#20 Wright Motorsports Porsche) and Jeff Westphal (#6 Vital Speed Ferrari). Mirko Bortolotti's #31 Audi Sport Team Hardpoint WRT entry qualified seventh but will start from ninth, one spot ahead of the #7 Bentley, due to a penalty incurred during an earlier session.

The Pole Shootout saw times fall short of those from this afternoon's qualifying run. De Phillippi could not match the 1m22.915s set by Jan Heylen in the #20 Porsche, with significant amounts of rubber laid down by other series the likely cause of this drop-off in pace.

Connor De Phillippi, Walkenhorst Motorsport: "Pole position is certainly a great performance from the team, BMW and myself. We couldn't have a better starting position for tomorrow, which I think will be a tough race. There might be some weather that throws a curveball into the mix. No one's experienced that here yet, so it could be interesting. Overall this has been a good day. We didn't look great on Friday but we made some good steps overnight and it demonstrates that the team has done a fantastic job. I have two great team-mates so we'll go out and put on a show tomorrow."