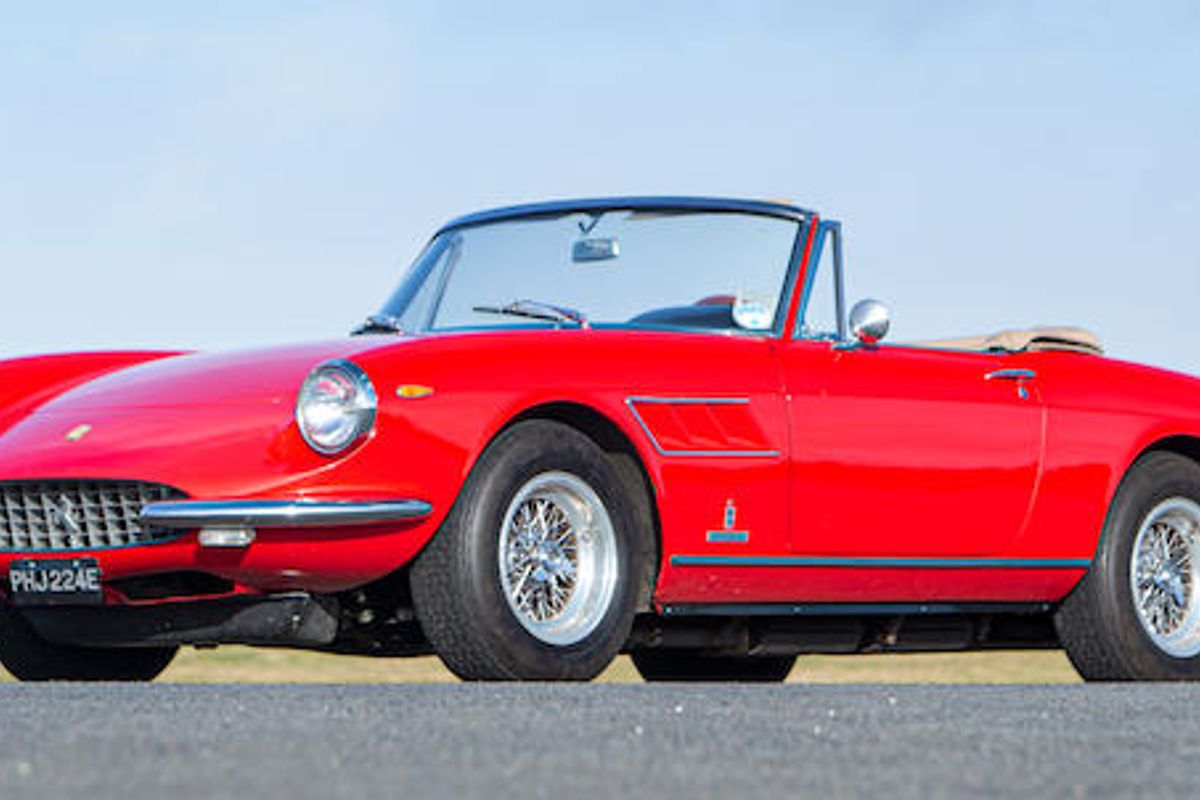 Coachwork by Pininfarina Registration no. PHJ 224E Chassis no. 10113

REGISTRATION NO. PHJ 224E
CHASSIS NO. 10113
*Delivered new in Italy
*Formerly resident in the USA
*Imported into the UK in 2004
*Present ownership since 2005

Ferrari convertibles have always been produced in considerably smaller numbers than their closed cousins and thus are even more coveted by collectors. In essence a closed version of the 275 GTS, the two-seat 330 GTC debuted at the Geneva Motor Show in March 1966 and was intended to fill a gap in Ferrari's line-up between the four-seat 330 GT 2+2 and the racer-on-the-road 275 GTB. Later that same year the open version - the 330 GT Spider, or GTS - was introduced at the Paris Salon.

Beneath the 330's bonnet resided the 4.0-litre, 300bhp version of Ferrari's familiar, two-cam, 60-degree V12, as used in the 330 GT 2+2. The short (2,400mm wheelbase) chassis followed Ferrari's established practice of tying together sturdy oval-section main tubes in a steel spaceframe, while the suspension was independent all round by wishbones and coil springs. First introduced on a road-going Ferrari in 1964 (on the 275 GTB) the rear suspension incorporated the five-speed, all-synchromesh gearbox in the form of a transaxle. Unlike the 275 GTS, the 330 GTS (and 330 GTC) employed the superior torque-tube transmission introduced on the 275 GTB towards the end of 1965.

Testing a 330 GTS in 1968, Road & Track magazine found that the fully sorted, all independent, transaxle chassis gave "a soft, level ride, wonderful adhesion and excellent behaviour. Out on the road, once the driver has the feel of things, he feels he could do almost anything with this car".
Luxuriously equipped in the best Gran Turismo manner, the 330 GTS interior boasted leather seats and electric windows as standard, radio, air conditioning and Borrani wire wheels being the options. With a top speed in excess of 150mph, excellent ride comfort and sure-footed handling, the 330 GTS justified Ferrari's claim that it was the world's finest convertible two-seater. Only 100 were produced by the factory between 1966 and 1968, alongside 600 examples of the 330 GTC Berlinetta.

The 38th of its type produced, Ferrari 330 GTS chassis number '10113' was originally finished in Blu Chiaro with Rosso leather interior and matching top, and was equipped with instruments in kilometres and the optional Borrani wire wheels (see Massini Report on file). The car was completed in July 1967 to European specification and delivered to dealer M Gaston Crepaldi in Milan, Italy.