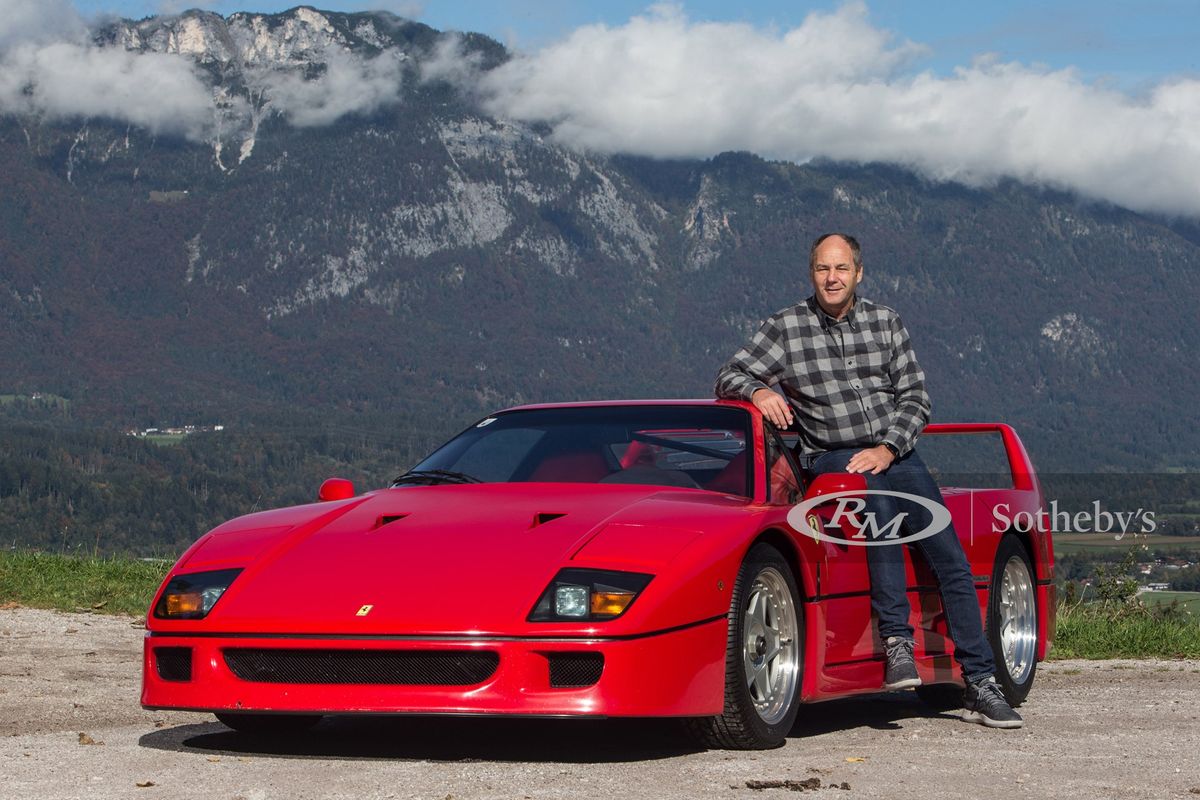 RM Sotheby’s has added an iconic Ferrari F40 to its auction catalogue for the upcoming Online Only: London sale
This specific Ferrari F40 is currently owned by ex-Ferrari F1 driver Gerhard Berger and comes complete with detailed service documentation and Classiche Certification

Bidding opens at 10:00 am EDT today (Monday, 26 October) with lots closing in a staggered format beginning at 9:00 am EDT on Saturday, 31 October

Collectors wishing to bid in the upcoming sale can register at rmsothebys.com
LONDON (21 October 2020) – RM Sotheby’s has added a stunning 1990 Ferrari F40 to the upcoming Online Only: London auction on behalf of its current owner, ex-Ferrari F1 driver Gerhard Berger. This particular example was completed at the Maranello factory on 27 March 1990 and has covered an impressive 30,000 km in that time.

The F40 was launched to mark the brand’s 40th anniversary and was also the last-ever production car to be signed-off by the late great Enzo Ferrari himself. Since this example rolled off the production line, it resided with owners in Singapore and Japan, before it was acquired and imported to Germany in 2016 where the official Ferrari dealership, Penske Sportwagen Hamburg, completed a comprehensive service with no expense spared. Work included new belts, tyres, brake discs and callipers and cam-belt, but one aspect that’s never required major attention is the original paint paintwork that remains in beautiful factory condition. The car is offered in non-catalytic converter and no adjustable suspension specification and benefits from no less than €79,000 of work that was undertaken in December 2017 (Est. £900,000-£1,100,000).

Also joining the consignments at the Online Only: London auction is another iconic Ferrari in the form of the 2011 Ferrari 599 SA Aperta. This example is one of only 80 SA Apertas ever made and has become a highly prized addition to any car collection given its rarity and beautiful styling. The SA Aperta is based off the focused 599 GTO’s chassis and drivetrain, however Ferrari engineers softened the suspension and tuned the exhaust to make the SA Aperta more comfortable for long-distance cruising. Presented in Grigio Silverstone over a Cuoio leather interior, this 599 SA Aperta is equipped with a number of desirable options including numerous carbon fibre options— carbon fibre racing seats trimmed in Cuoio, carbon fibre central bridge, and carbon fibre door sills. Further interior options include stitching in Charcoal, gunmetal grey seat belts, and a full Cuoio dashboard. This European-specification example has been driven less than 1,000 km from new and presents in outstanding condition (Est. £850,000-£1,050,000).

With rare Porsches already announced for the London sale, collectors will be delighted to see another rare and desirable limited-edition Stuttgart legend joining the auction; a one-of-86 1992 Porsche 911 Turbo S Lightweight. One owner from new, this outstanding example is chassis no. 39 (FIN: WPOZZZ96ZPS479039) and has covered 131,000 km since new and benefits from a complete, yet meticulous nut-and-bolt restoration in 2019 to bring it back to original factory condition. The impeccable history comes with full-service history, purchase receipts and Porsche factory certification. This is undoubtedly one of the headline lots when bidding opens for Online Only: London on 26 October (Est. £680,000-£800,000).

In addition to these three incredible cars, the Online Only: London sale will also feature numerous other coveted cars including: