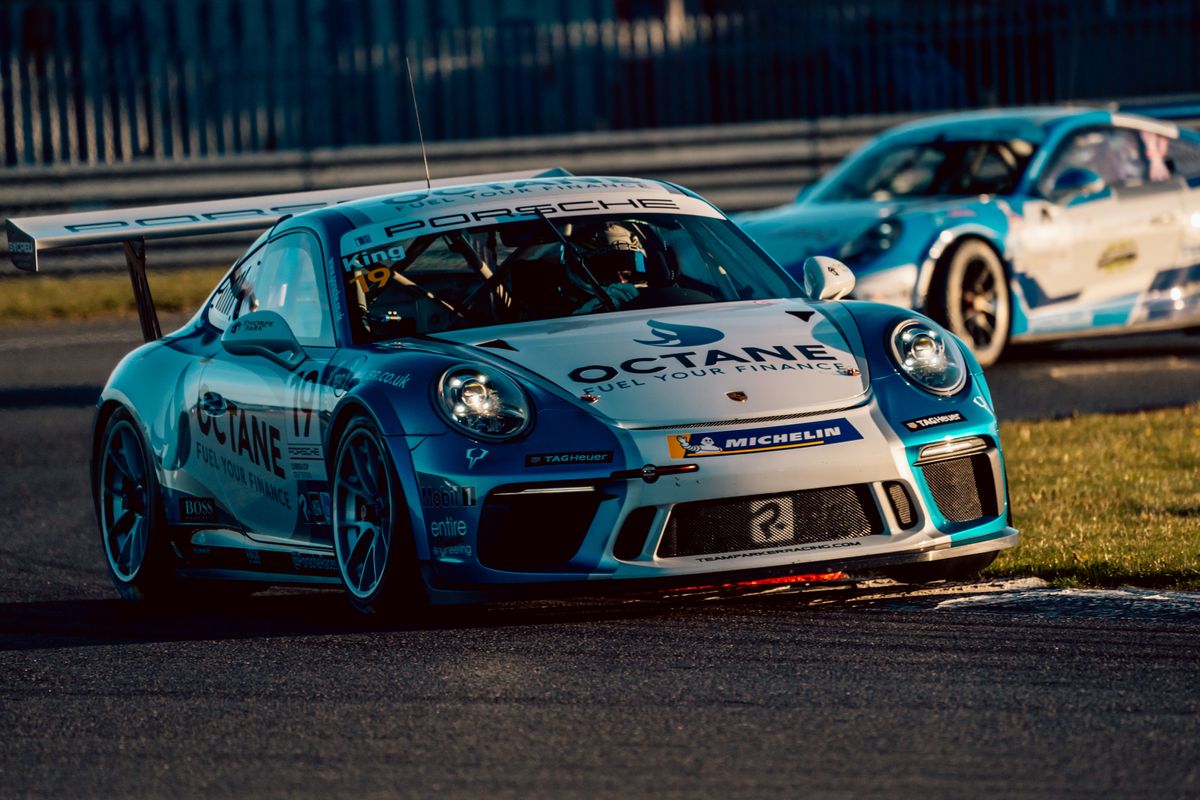 The Porsche GB Junior driver went into the weekend having already taken eight wins in his debut season in the series - results that had allowed him to take a handy 28 point lead into the Norfolk race meeting.

Fresh from a starring role at the Goodwood Speedweek event the previous weekend, the Maidenhead racer headed into the penultimate meeting of the year looking to build on a double victory at Silverstone a month earlier.

Fourth fastest in mixed conditions during Friday testing at the wheel of his Team Parker Racing-run car, Harry then faced a long wait on Saturday before qualifying took place in fading light at the end of the day - with drivers forced to contend with bracing winds and cold track temperatures.

Saving his best laps until the closing moments of the session, Harry would set two lap times that were good enough to snare a seventh successive pole position, enabling him to maintain his 100 per cent record.

Overnight rain meant tricky circuit conditions greeted Harry for the opening race of the weekend on Sunday morning, with drivers being given two green flag laps ahead of the start to give them an indication of what to expect when the action kicked off.

When the lights went out, Harry slipped back to second behind a fast-starting Matty Graham but when Graham then ran slightly wide at turn one, Harry nipped back ahead into the lead. From that point on, Harry was never seriously troubled as he stormed away from the pack behind to take win number nine of the campaign by more than ten seconds.

With the top four on the grid reversed for race two, Harry headed out onto the circuit aware that the championship title could be provisionally secured if results went his way, and a solid opening lap saw him get ahead of Graham into third at Palmer.

Seeing the chance to then move ahead of team-mate, and closest rival, Josh Webster at the Montreal Hairpin on lap two, Harry moved up into second spot and then slid down the inside of leader Will Martin just two corners later to put himself into the lead.

As had been the case in race one, Harry then stamped his authority on proceedings once ahead and put in the fastest lap as he eased away from the pack behind to take his tenth victory of the year.

That result was more than enough to give Harry an unassailable lead in the standings, making him the provisional champion at the first time of asking with the season finale at the Brands Hatch Indy circuit still to run next month.

"It's been a phenomenal season and I can't put into words how I feel right now," he said. "To represent Porsche as the Junior Driver is a huge privilege for me, and to wrap up the title with a round to spare is absolutely brilliant.

"It's been another strong weekend on track and having taken the win in race one, I wanted to try and wrap up the title in style in race two; which is exactly what I managed to do.

"From the first qualifying session of the season at Donington Park, I knew could challenge for the title as we had been competitive in pre-season testing. Even when we had some rough times in the middle of the season, to have taken ten race wins is credit to the whole team for doing a fantastic job, and this is something I won't forget for a while.

"To be only 19 and have two championship titles to my name - and particularly one as prestigious as the Porsche Carrera Cup - is an amazing feeling, and I think it will put me in a good place for my career going forwards.

"We've still got the final round at Brands Hatch to come, and hopefully we can celebrate the title with another strong weekend to end the year there next month."