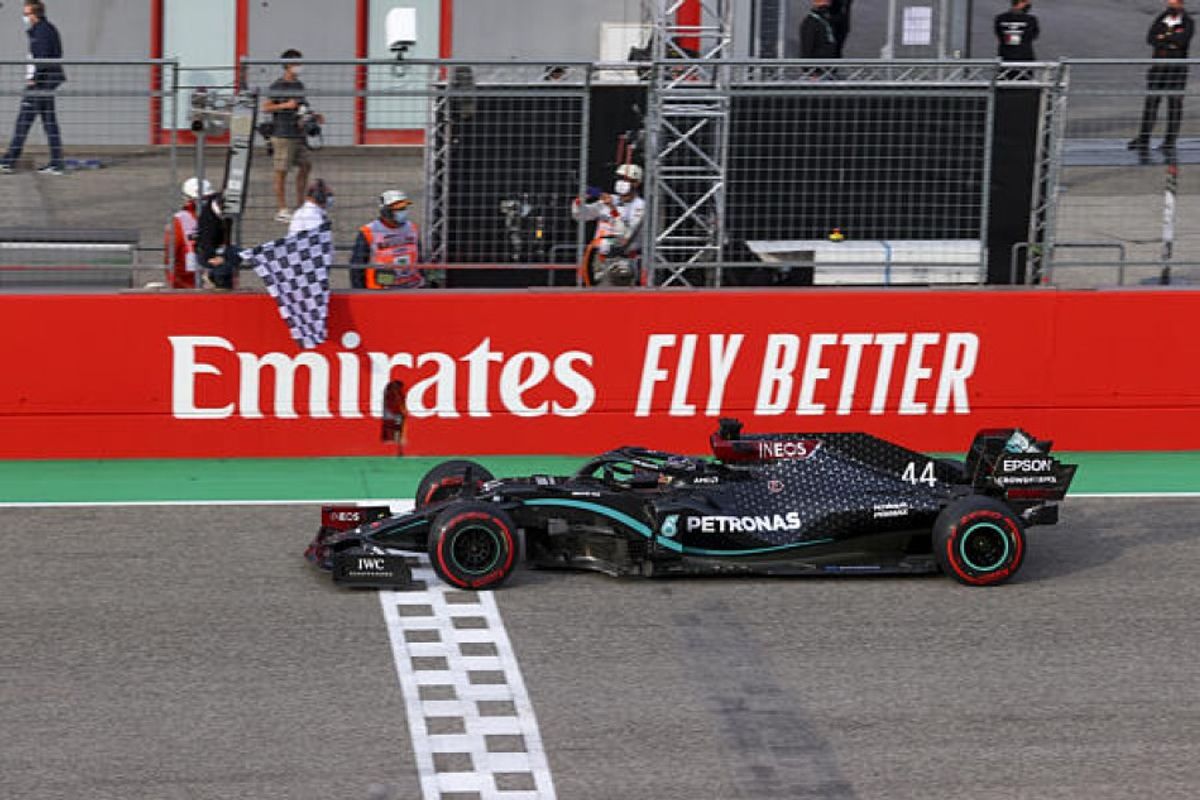 Lewis Hamilton won Formula 1’s Emilia Romagna Grand Prix ahead of team-mate Valtteri Bottas as Mercedes sealed a seventh consecutive Constructors' title. Daniel Ricciardo finished third for Renault as a late safety car for a puncture that took Red Bull’s Max Verstappen out of the race shuffled the order at the flag.

When the lights went out for the start, pole position man Bottas got away well but second-placed Hamilton made a poor getaway, and as the field surged towards Tamburello Verstappen was able to get past to claim P2.

Behind the top three, Ricciardo rose to fourth place as AlphaTauri’s Pierre Gasly was forced wide by a defensive Hamilton.

The front three began to quickly pull away from the pack and after seven laps Ricciardo was already 5.8 seconds behind third-placed Hamilton. Behind the Australian, Gasly led Ferrari’s Charles Leclerc. However, on lap 9 Gasly was told to box and retire his AlphaTauri due to a loss of water pressure.

Verstappen pitted and made a switch to hard tyres on lap 19 and Mercedes responded by pitting Bottas for hard tyres on the following lap, keeping the Finn ahead of the Dutch driver. Ahead, Hamilton stayed out on his starting mediums and he soon began to pull away at over half a second a lap.

On lap 31 the race swung towards Hamilton when Renault’s Esteban Ocon stopped at the side of track on the exit of Turn 13. A Virtual Safety Car was deployed and Hamilton took the opportunity to pit for hard tyres. He resumed in the lead ahead of his team-mate and Verstappen.

Bottas was nursing a car wounded by a collision with debris on the second lap, however, and by half distance Verstappen was beginning to exert heaby pressure on the Mercedes driver. On lap 42 he forced Bottas into a mistake at Rivazza. The Finn locked up and ran wide and the error allowed Verstappen to sweep past the Mercedes at the start of the following lap and reclaim P2.

Kimi Räikkönen was the last of the medium-tyre starters to make his pit stop with the Alfa Romeo driver stopped on lap 50 for soft tyres and it appeared then that the order might settle.

However, just a lap later disaster struck Verstappen when he suffered a tyre failure and spun off track at Tamburello. The Safety Car was swiftly deployed and cars flooded towards the pit lane.

Ricciardo and Red Bull’s Alex Albon in though, stayed out on track and behind the Safety Car the Renault rose to third and the Red Bull drive to fifth place behind the Ferrari of Charles Leclerc.

When racing resumed at the start of lap 58, Hamilton held his lead from Bottas but further back Albon was immediately put under pressure by Racing Point’s Sergio Pérez, who had pitted from third for softs under the SC.

The Mexican got past around the outside into Tamburello and as he tried to fight back Albin spun off. He was able to rejoin but dropped to the back of the field, where he would eventually finish.

At the front, Hamilton was in total control, and five laps late he took the chequered flag, 5.7s ahead of Bottas as Mercedes sealed their seventh consecutive Constructors’ Championship title.

Ricciardo, benefiting from staying out during the safety car, took his second podium finish of the season. Behind him Daniil Kvyat used a new set of softs tyres to good effect to charge through to fourth at the flag ahead of Leclerc and Pérez. Carlos Sainz was sixth ahead of McLaren team-mate Lando Norris, while Alfa Romeo scored a double points finish with Räikkönen taking P9 ahead of team-mate Antonio Giovinazzi.