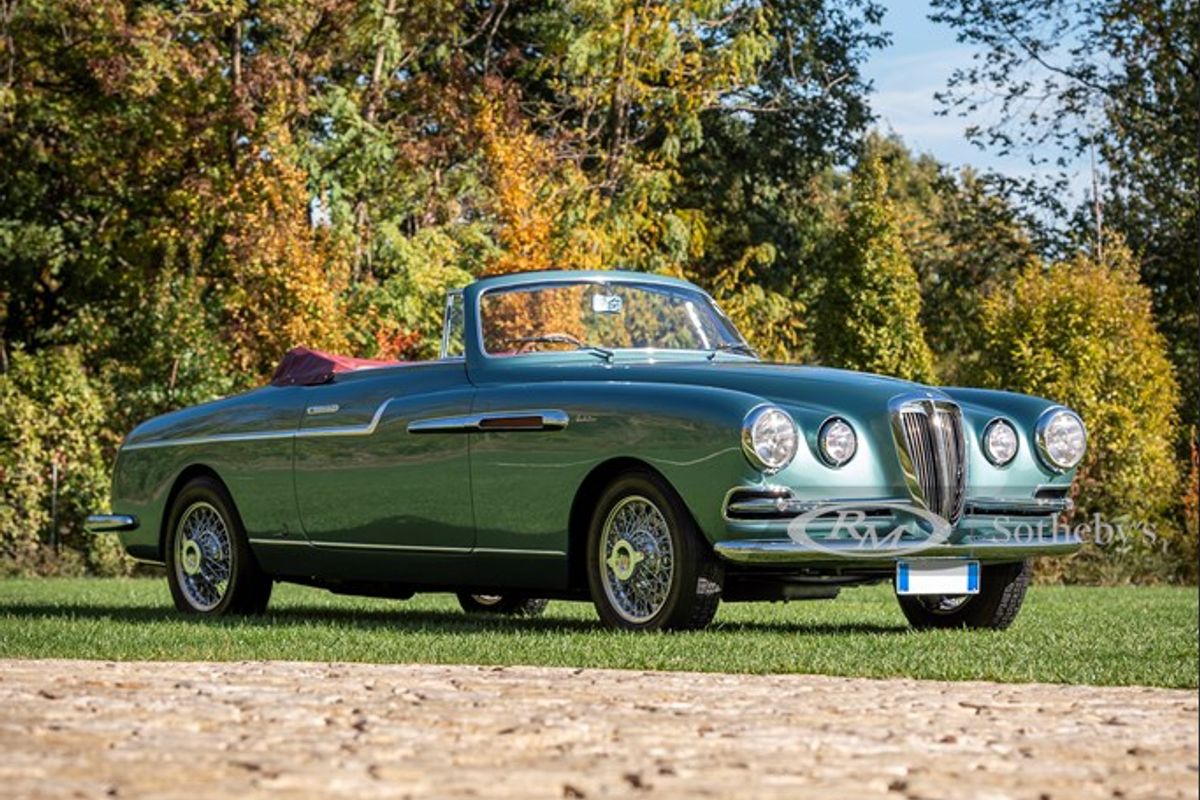 The first production car to be fitted with a V-6 engine, the Lancia Aurelia was introduced in 1950 and proudly brought Lancia into the post-war era, helping the company cement its reputation for build quality and engineering.

The type-B50 chassis of the Aurelia was sold as a rolling-chassis and made available to coachbuilders of the day for either low-volume production or true coachbuilt one-offs. Much like automobiles of the pre-war era, this allowed clients to create an automobile to their own specific needs and tastes. Sadly, due to increasingly stringent regulations and the advent of mass production automobiles, this practice was at its height in the pre-war era, and would nearly disappear from the automotive landscape by the late 1960s.

Fitted with Lancia’s 1.7-litre V-6 engine, the B50 chassis was heavy, and performance left something to be desired. For 1952, Lancia introduced the B52, which brought about a vastly improved and lighter chassis, as well as a more powerful 2.0-litre V-6 engine. Like the B50 chassis, this would also be intended for low volume production. Just eighty-six B52 chassis were constructed for the 1952 model year, and only twelve would be completed for the second and final year of production in 1953.

Chassis number B52-1097 was completed by Lancia on February 6, 1953. It was then shipped out to Carrozzeria Vignale of Turin. Founded by Alfredo Vignale in 1948, by the point the coachbuilder had received this chassis, Vignale was beginning to hit its stride and would frequently produce coachwork in low volumes for Italian firms including Ferrari, Maserati, and Alfa Romeo. Despite its coachbuilt flair, this Aurelia’s bodywork was unmistakably Lancia, easily recognizable from the traditional Lancia grille and four-headlight nose.

After it was completed, this B52 Spider was shipped to Belgium where it appeared at the esteemed 1955 Brussels Motor Show in January of that year, one of the highlights of the European motor-show circuit. Rather than being displayed on Vignale’s own stand, chassis number B52-1097 appeared on Lancia’s own stand, a testament to Lancia’s appreciation of Vignale and the attractiveness of this specific automobile. There, it was finished in Metallic Lake Green with a Bordeaux interior, just as it presents today.

Unfortunately, following the Brussels Motor Show, not much of the Lancia’s history is known although it remained in Belgium through 2007 when it was acquired by an Italian collector. Returning to its native Italy, the car was entrusted to the well-regarded restorers at Carrozzeria Quality Cars of Vigonza in 2012. Upon disassembling the car for restoration, it was found to be highly original, retaining many of its one-off components, which would have proven near-impossible to reproduce. Importantly, the car also retains its original engine. During this process, traces of the original paint and leather interior were found, helping the restorers bring back the B52 to its former glory. The restoration took more than 2,450 hours, with no less than 2,000 hours spent on perfecting the bodywork and 450 hours overhauling and fine-tuning its mechanical systems.

Following the restoration, the car was shown at the 2016 Concorso d’Eleganza Villa d’Este. Located on the shore of Lake Como, this is considered to be one of the premier concours events in the automotive world, and the car’s invitation to the event alone is a testament to its importance and exceptional design. There, the car was entered in ‘The Golden Era of Sports Car Design’ class, where it was awarded second in class. That same year, the car received a FIVA Identity Card, assigned class ‘A/3’ (a restored historic vehicle) and was also awarded with an ASI Certificate of Identity.

A true one-off built by one of Italy’s most celebrated coachbuilders, this B52 Spider showcases post-war Italian flamboyance and design at its very best. Its period motor show pedigree and contemporary award-winning appearance at the Concourso d’Eleganza Villa d’Este prove that its design has endured over time and is just as attractive today as it was in 1955, no doubt thanks to its incredible restoration