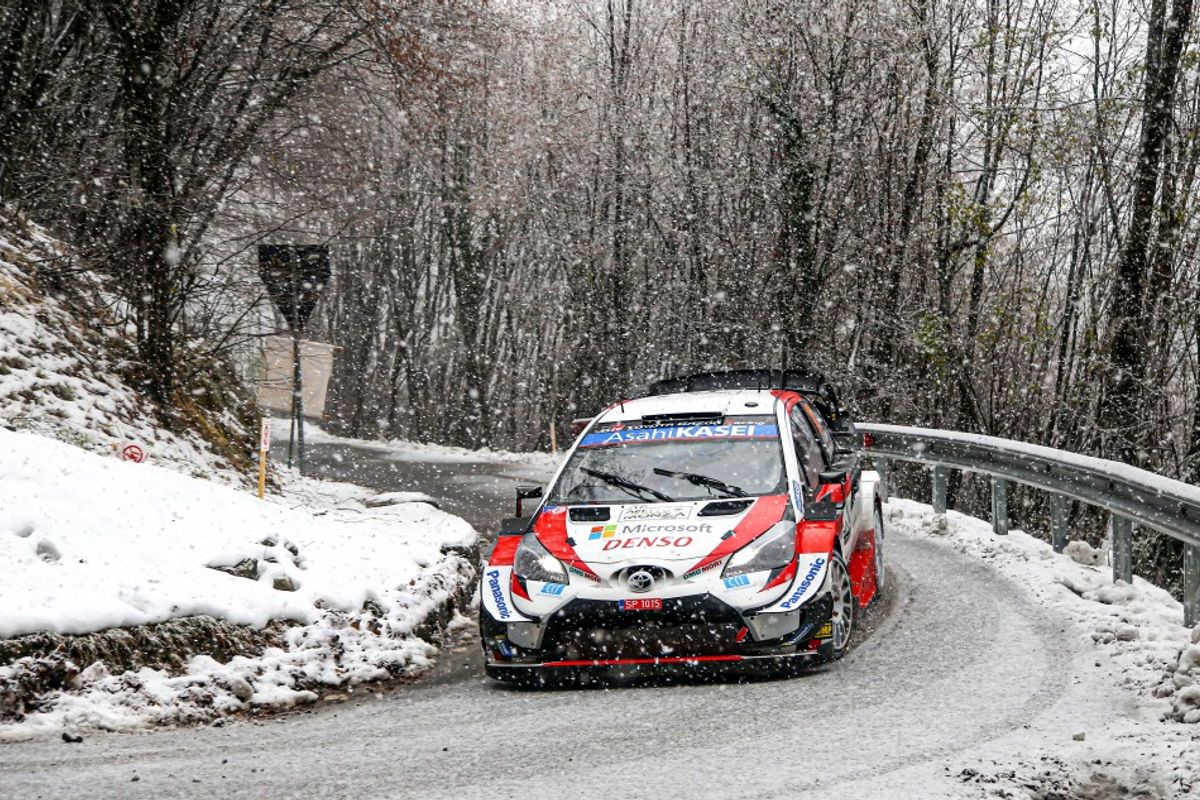 The Frenchman completed the penultimate leg of the season finale with a 17.8sec lead in his Toyota Yaris, after team-mate and championship favourite Elfyn Evans crashed on treacherous snow-covered roads.

Three more speed tests at Monza’s famous Cathedral of Speed circuit on Sunday, covering 40.25km, stand between Ogier and the crown – but conditions in northern Italy are so demanding that it will be no walk in the park for the 36-year-old.

Third-placed Evans was fastest at the mid-stage split in this afternoon’s Gerosa test in the Italian Alps when he was caught out by the conditions. His Yaris slid down a bank into a tree.

Sportingly, Evans ran back down the road to warn Ogier of the impending hazard and prevent his colleague joining him in the undergrowth.

“We came around a flat right corner with a short braking and the surface of the Tarmac had changed. When I braked on that, it was just like glass and there was no chance of us slowing down at all. It completely caught me by surprise,” admitted a disappointed Evans.

“You have to be there, you have to try. You’re not going to win anything by sitting around at the back and I think everybody was having to take some sort of chance. I actually had the surface change in my notes, but I didn’t anticipate it would be as extreme.”

The pendulum swung to and fro between Ogier and Dani Sordo in a breathless morning battle on mainly wet roads after much of the snow that blanketed the area melted overnight.

The lead changed hands on every stage before Ogier pulled clear of the Spaniard, who chose caution over bravery after Evans’ demise, this afternoon. The deep snow caused the penultimate stage to be cancelled but Ogier was taking nothing for granted.

“At the moment if you look at the championship classifications, Elfyn is 14 points ahead of us so we still need to score the points,” he said.

Ott Tänak ended third, 4.3sec behind team-mate Sordo. If the pair keep those places it would be sufficient for Hyundai Motorsport to retain the manufacturers’ title.

Finns Esapekka Lappi and Kalle Rovanperä were fourth and fifth in a Ford Fiesta and Yaris. Lappi survived a spin and Rovanperä emerged unscathed after sliding into a wall.

Gus Greensmith and Ole Christian Veiby crashed out after violent accidents at the same corner, while Thierry Neuville did not restart following his retirement yesterday as Hyundai elected to keep the Belgian off the mountain roads.