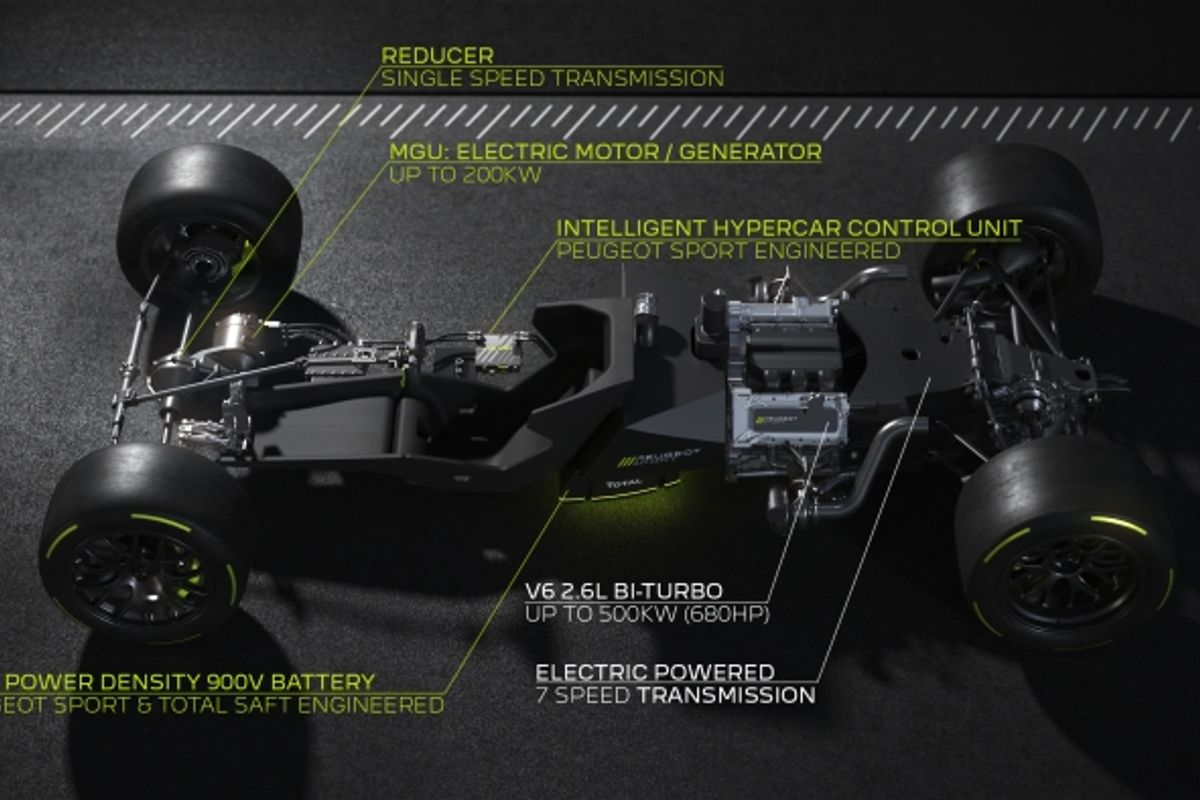 in the fields of hybridisation and world-class motor racing to develop a powertrain (PEUGEOT HYBRID4 500KW) in compliance with the new FIA WEC regulations.

The main features of the PEUGEOT HYBRID4 500KW are:

PEUGEOT Sport has leveraged its experience of endurance racing (V12 and V8 PEUGEOT 908s) and that of PSA Motorsport in the FIA World Rally Championship (four cylinders) to develop a new 2 .6-litre, twin-turbo, 90-degree V6. Positioned behind the driver, this 500kW / 680hp powertrain will tip the scales at 165 kg and drive the rear wheels.

“The architecture of the PEUGEOT HYBRID4 500KW (680hp) powertrain is the result of a highly- detailed brief shaped by the new FIA WEC regulations,” notes François Coudrain, PEUGEOT Sport’s WEC Programme Powertrain Director. “We initially considered a single turbo, but that would have prevented us from achieving our engine’s centre of gravity target. A twin-turbo V6 block offers the best trade-off between technology, weight, packaging of the engine’s ancillaries, reliability and performance.”

The robotised sequential seven-speed (plus reverse) gearbox will be controlled by steering- wheel-mounted paddle shifters, and the PEUGEOT Sport-developed brake-by-wire system will also be managed electronically. The driver will be able to adjust the level of engine-braking gener ated by the electric motor under deceleration and the force applied by the pads to the braking discs to achieve the optimum electric regenerative/ hydraulic braking split. Optimal energy management, both under acceleration and during energy recovery (capped by the regulations at 200 kW/ 272hp), will consequently be key to the car’s performance and efficiency.

TOTAL-DEVELOPED LUBRICANTS
The cooling fluids and engine / gearbox lubricants will play an important role in the competitiveness of PEUGEOT Sport’s Hypercar which will use prototypes tailored by Total for intensive use and long life across a wide range of temperatures. Total has also developed special greases and oils that are evolutions of formula derived from its experience in motorsport. Total engineers will attend races as an integr al part of the team to take and analyse samples with a view to monitoring the life of the car’s assemblies over time.

ELECTRIC MOTORSPORT INSIDE
The PEUGEOT Sport-conceived front-mounted 200kW (272hp) motor generator unit will drive the front wheels and benefits from the team’s experience of developing electric motors and management systems for production cars. This knowhow has been compounded by:

PSA Motorsport’s expertise in the design and running of electrified systems in motorsport
the recent launch of the PEUGEOT SPORT ENGINEERED line, plus the expertise of PEUGEOT and Groupe PSA in the fields of hybrid and fully-electric mobility

“The motor generator unit will be equipped with a lightweight, high-efficiency single-speed transmission and a latest-generation inverter to transfer battery power to the motor,” says François Coudrain. “It will have the capacity to use all the energy available in the battery instantly thanks to the powertrain’s energy management system strategies. PSA Motorsport’s experience of the WRC and Formula E will contribute to the developme nt of the software employed to manage the computer and energy systems [braking energy recovery, power under acceleration, anti-lag system, reduced fuel-consumption].”

INNOVATIVE BATTERY CONCEPT DEVELOPED BY TOTAL AND ITS SUBSIDIARY SAFT

The high-density, high-power battery was developed jointly by PEUGEOT Sport and Saft, a Total subsidiary. As one of the keys to high performance, it will need to be integrated perfectly, physically inside the car and in the powertrain’s energy-management process. Working from a specificatio n written by PEUGEOT Sport, Saft’s engineers selected the best type of cells for the battery which favours power over energy density, consistent with the needs of endurance racing.

“The main parametre will be to optimise how the energy stored in the battery is used,” explains Kamen Nechev, Saft’s Chief Technical Officer . “To achieve this, you need an extremely short charge-time combined with high-capacity storage cells to form a package that enables maximum power to be delivered as rapidly as possible. The most competitive solution resides in the management of charge optimisation and the amount of power available in real time.”

The new battery will be located in a carbon casing inside the car’s monocoque struct ure, behind the driver and underneath the fuel tank. It has been designed to combine durability with consistent performance during races of durations of up to 24 hours, and even beyond. Total is responsible for the homologation of the battery which will be assembled in a new workshop at PEUGEOT Sport’s Versailles-Satory base, near Paris.

PEUGEOT Sport’s collaboration with Total on the FIA WEC programme fits perfectly with the operational guidelines and job-share outlined in the plan for Automotive Cells Company, a joint venture which seeks to become Europe’s number one battery manufacturer.

Although the internal combustio n engine delivers 500 kW (680hp) and the motor generator unit has a capacity of 200 kW (272hp), the regulatio ns set a maximum power output of just 500 kW (680hp) during races. To adapt to the different sit uations in competition, the LMH powertrain functions as follows:the regulations forbid the use of electrical energy below 120kph (75mph), so the motor gener ator unit only engages once this speed has been The car must pull away from standstill under the power of its internal combustion engine aloneat full power, the power output of the bi-turbo V6 is capped at 300 kW (408hp) and adjusted as a function of the power delivered by the motor generator unit at 200 kW (272hp) which is directly dependent on the battery levelwhen the motor gener ator unit comes into use, the car automatically switches to four-wheel drive, thereby modifying its drivability – through high-speed corners, for example/when the high-density battery is empty, the internal combustio n engine reverts to 500 kW (680hp) power output and the transmission retur ns to rear-wheel drive. During races, the battery will be fully charged prior to the start by means of a mains-connected plug-in hybrid charger. Once out on the track, the battery will function completely independently and be charged only by the kinetic braking energy recovery

The following exceptions are covered by the regulations, however: the power output of the internal combustio n engine may be increased by three percent to 515 kW (700hp) at the end of straights when the battery is empty, so the electric motor is working as a 15 kW (20hp) This configuration is applied automatically by the car’s electronics the possibility to run with either the internal combustio n engine or the electric motor, or both
concurrently, in the pitlane or when speed is restricted to 60kph(37 mph)

As required by the regulations, the Hypercar will be equipped with specific sensors to monitor and transmit the power levels measured at all four wheels to the FIA in real time to guarantee the maximum output specified by the Balance of Performance (BoP).

Before the track-testing programme begins at the end of 2021, PEUGEOT Sport and Total will continue their engineering which is expected to see the powertrain run on the bench and simulator in the course of the first half of 2021.

While motorsport is as a full-scale laboratory for testing new technologies, the experience of PEUGEOT and Groupe PSA in the field of electrified vehicles has enabled PEUGEOT Sport to benefit from other syner gies, including close collaboration between road-car and racing powertrain engineers, on the development of systems and components.

PEUGEOT Sport employs a number of engineers who, like François Coudrain, have had the opportunity to apply their expertise to both mass-production road models and race cars in the course of their career . This unique, valued knowhow feeds into the overall knowledge pool behind the PEUGEOT SPORT ENGINEERED line, the first fruit of which was the PEUGEOT 508 PEUGEOT SPORT ENGINEERED. This version of the PEUGEOT 508 (360hp / 520Nm / WLTP CO2 emissio ns: 46g / km) embodies the brand’s new Neo-Performance concept and offers a perfect blend of advanced technology and sporting pedigree. It is the most powerful PEUGEOT road car ever made and its PEUGEOT Sport engineered systems are a source of inspiration for the FIA WEC programme.