HISPANO SUIZA returns to racing in 2021 with renewed energy 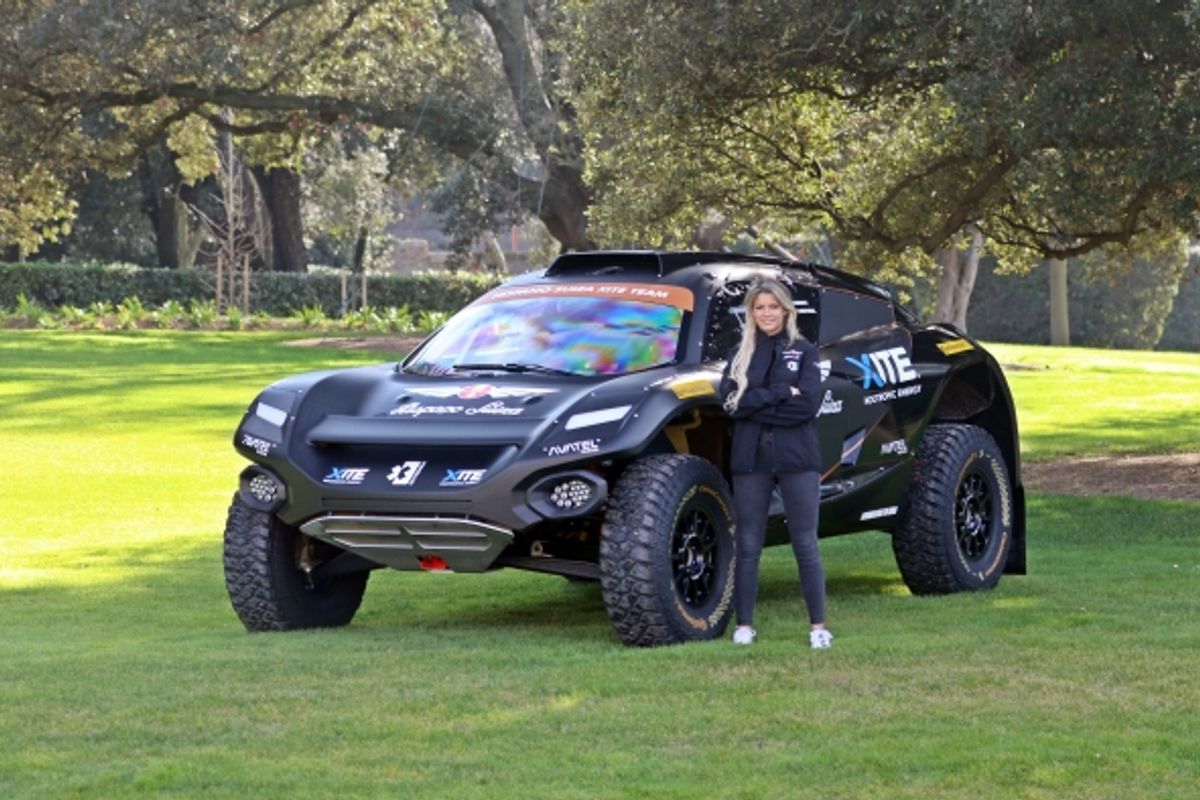 HISPANO SUIZA in association with XITE ENERGY have created a young racing team, full of talent and great experience in off-road racing.

In 2021 HISPANO SUIZA celebrates a legendary milestone: 100 years from André Dubonnet´s win in the George Boillot Cup, behind the wheel of the H6 Coupé in Boulogne (France).

HISPANO SUIZA returns to racing in 2021, with a team formed in association with the energy drink brand XITE ENERGY. The HISPANO SUIZA XITE ENERGY TEAM was presented today at the Castle of Peralada, in Girona (Spain) and will race in next year´s Extreme E Championship. Oliver Bennett and Christine Giampaoli Zonca will be the team's drivers in the inaugural season of this new and revolutionary championship, which promotes values ​​such as equality, sustainable mobility and the fight against climate change. It promises to be the ideal technological laboratory for the development of vehicles of the future.

The HISPANO SUIZA brand has resurfaced with vehicles such as the Carmen and the Carmen Boulogne, instant icons of present and future. They pay tribute to the marque´s legendary past and integrate the most innovative technology in the automotive industry, while offering unmatched performance, created as true works of art to thrill their exclusive owners. At the beginning of the 20th century, HISPANO SUIZA turned its racing debut into a legend, with three consecutive victories in the George Boillot Cup, an endurance race. The first one, with André Dubonnet at the wheel of the HISPANO SUIZA H6 Coupé, took place in 1921.

A century later, HISPANO SUIZA maintains its competitive spirit intact, and announces that it will participate in Extreme E with the HISPANO SUIZA XITE ENERGY TEAM. Oliver Bennett and Christine GZ, the team's main drivers, have been in charge of unveiling the HS Extreme E, the spectacular 550 hp electric off-road vehicle with which both will compete in the 2021 season of the electric contest.

Oliver Bennett is a 28-year-old British driver with experience in rallycross competitions. In 2016 he made his debut in the British Rallycross Championship and the following season he fought for the title. He also made his debut in the FIA World Rallycross Championship, where he has competed in recent seasons. Bennet has also participated in a number of Americas Rallycross events and the Gymkhana GRID in Cape Town in 2018, where he put on a great performance.

Christine Giampaoli Zonca, better known as Christine GZ, is a 27-year-old Italian-Canary driver. In 2014, in her full-time debut in competition, she achieved her first victory in a gravel rally, and that same year she was proclaimed regional champion of the Canary Islands in front-wheel drive vehicles, as well as in group B4. In 2016 she made her debut in the World Rally Championship (WRC) at Rally de Catalunya, as a member of the first all-female rally team, and won the women's category of the Spanish Gravel Rally Championship. Since 2017, Giampaoli's career has been focused on participating in off-road races, in the United States and Mexico, where she achieved seventh place in the famous Baja 1000, within the Pro UTV Turbo category. In 2020 she became the main driver of Avatel Racing Team, achieving 3rd place in the T2 category in the Andalucía Road to Dakar Rally.

The HISPANO SUIZA XITE ENERGY TEAM will be led by Team Manager Juli Mundet Caballero. This renowned Spanish engineer has worked in different areas within the automotive industry, both in the product and R&D and competition departments. He began his professional career at the Nissan Technical Centre in the gearbox and transmission departments, and in recent years he has worked at the High Energy Physics Institute in Barcelona, as chief engineer. Since 2010 he has served as a race engineer in various competitions, including the FIA ​​World Rallycross Championship.

For this adventure, HISPANO SUIZA has an exceptional partner like XITE ENERGY, a growing British company producing healthy energy drinks. Its product is created using a formula based on natural caffeine, ginseng and vitamin B, without sugar, and all this without compromising the taste of a refreshing drink or the energy supply.

The HISPANO SUIZA XITE ENERGY TEAM is also supported by Avatel, the sixth national fibre optic operator in Spain. This Spanish company specializes in bringing broadband internet connection to rural areas with low population density, and generates technology-related employment in the towns where it is located, helping to activate the local economy.

Miguel Suqué Mateu, Chairman of HISPANO SUIZA said: “HISPANO SUIZA has always integrated values ​​such as sportsmanship and competition into its DNA: both of vital importance for this project. Being able to take our brand to the desert, the Polar Arctic Circle or the Amazon, and also do it in a competitive, sustainable way and taking care of our planet, is something magnificent that we will achieve in a competition as revolutionary as Extreme E. I wish to thank our partners and our technical team for their trust and our racing drivers, Oliver and Christine, since they are the ones who will allow us to continue fighting for victories and good results, just as we did 100 years ago”.

Sergio Martínez, CEO HISPANO SUIZA: “Today we must think about electromobility and sustainability. We have to be very aware that the world is changing and we must all fight to reduce our carbon footprint before it´s too late. Today we announce that HISPANO SUIZA will have its own team competing in the Extreme E Championship. It is an ambitious competition, which will be held in five natural paradises in 2021, and the HISPANO SUIZA stork will be in all of them, represented by a team full of talent”.

Alejandro Agag, CEO and Founder, Extreme E: “I welcome the legendary Spanish brand HISPANO SUIZA, founded in 1904 by the Suqué Mateu family, to the Extreme E Championship. True to its tradition and racing history, this time, it returns to motorsport looking to the future, to the electrification of mobility. I am convinced that the Hispano Suiza team will honour the great tradition of their name, and will be a formidable competitor in our championship, the most remote sporting event on the planet”.

Oliver Bennett - "This is one of the most special days of my life, and I am extremely proud to be part of the HISPANO SUIZA XITE ENERGY TEAM. Driving a HISPANO SUIZA is within the reach of very few people around the world, and I am delighted to be able to drive the most extreme of all, the HS Extreme E. This is a Championship in which we will be required to push to show our full potential at every race, but at the same time we will be able to fight to make our planet a better place. I am sure that this is just the beginning of a great adventure for all of us. "

Christine GZ - " I am very excited to be part of the HISPANO SUIZA XITE ENERGY TEAM. We are going to compete with a very powerful vehicle that represents the future of the automotive industry, 100% electric. We also have the opportunity to raise awareness about climate change by showing that you can race in some of the most remote places in the world without polluting the planet. I am very proud to work for such an innovative company as HISPANO SUIZA and I greatly appreciate the trust placed in me by Avatel. I think that having mixed teams will be a great opportunity to give female drivers more visibility and will contribute to have a stronger female presence in motorsport in the future. I am extremely happy to share a car with Oliver: he is a great driver; I have followed his career for a while now and I am sure that we are going to complement each other perfectly. Now I'm just looking forward to racing and doing my best for our team”.

Extreme E represents a revolution in the world of motorsport. This new championship goes beyond the show, the track and the results, and has a strong social commitment. The contest is based on three pillars: electrification, environment and equality. All participating vehicles will be 100% electric and their batteries will be recharged with sustainably generated hydrogen.

The teams will travel the world on the St. Helena ship, which will minimize the carbon footprint of transport, and a group of scientific researchers will accompany the championship at each of its appointments, thus contributing to research in areas affected by the climate change. The season, which begins in March and ends in December, will travel through different continents and extreme locations, such as the Saudi Arabia desert, the Pink Lake of Senegal, Greenland, the Amazon and Tierra del Fuego, in Argentina. Each of the five events on the calendar will show the environmental impact the areas have suffered over the past decades.

Equality in motor racing is another of Extreme E's focal points. Therefore, all teams will be made up of a man and a woman driver, who will fight under the same conditions to achieve the best results for the team.

HISPANO SUIZA
HISPANO SUIZA was founded in Barcelona in 1904, by Damián Mateu and Marc Birkigt. Originally, the company was identified by its stork-in-flight emblem, a reference to the company’s prowess in producing aero engines in the early 1900s. Between 1904 and 1946, HISPANO SUIZA built more than 12,000 luxury cars and 50,000 aeroplane engines.

Now reborn, the company created the Carmen in 2019 and the Carmen Boulogne earlier this year, pioneering the ‘hyperlux’ segment through a unique blend of timeless design, rigorous luxury, painstaking craftsmanship and scrupulous attention to technical and engineering details.

HISPANO SUIZA plans to become one of Europe’s most luxurious and exclusive car manufacturers, producing customisable luxury cars of the highest quality for the world’s most discerning motorists. The brand is proud of its Spanish roots with its headquarters, technical centre, and manufacturing facility all based in Barcelona, and a direct family lineage tracing four generations to the founder Damián Mateu.