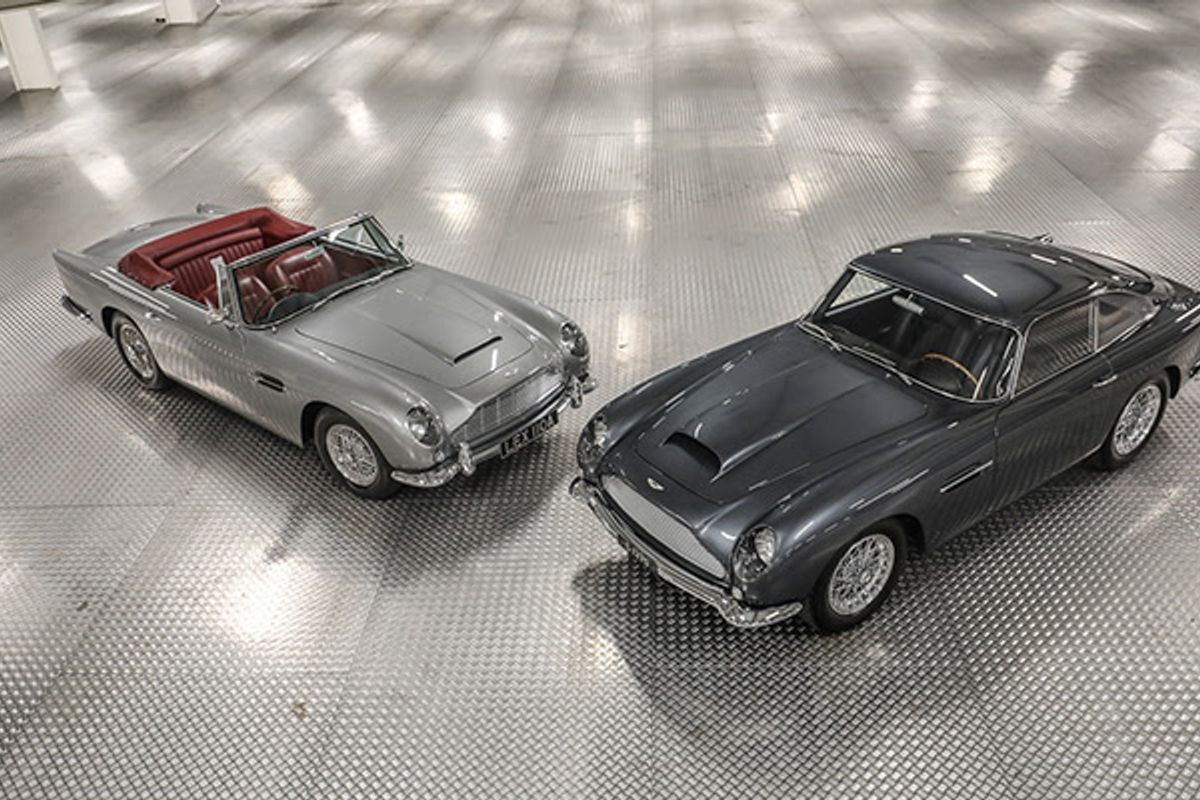 Hailing from a private UK-based collection, these nine cars represent  the very best of motoring’s most prosperous era,
with highlights from Ferrari, Mercedes-Benz, Aston Martin, Bentley, and Rolls-Royce.

Gooding & Company has reveaed Geared Online European Sporting & Historic Collection, a curated selection of nine coveted and magnificent automobiles to be offered on its online auction platform. This Geared Online auction event follows the company’s record-breaking “Passion of a Lifetime” sale at Hampton Court Palace.  The online only auction will begin on Thursday, 28th January and run through Friday, 5th February 2021, with lots closing beginning at 12:00 GMT.

“Our first UK auction presented new opportunities for Gooding & Company, and thanks to the record sales, we are able to once again deliver one of the most well-regarded private collections to the international market,” states President and Founder of Gooding & Company, David Gooding.

“I have admired this incredible selection of cars over a period of time and am delighted to have secured them to form the first European based online auction for Gooding & Company,” says Joe Twyman, Gooding & Company’s UK Specialist. “Carefully curated by the current owner who had a fastidious eye for presentation and detail, this diverse selection offers a great opportunity for a wide range of tastes and interests. Each of the cars has its own individual outstanding qualities and as such we have worked hard together with our consignor to create a sale that reflects and does justice to this wonderful collection.”

1967 Ferrari 275 GTB/4 (Estimate: £1,750,000 - £2,000,000)
The 275 GTB/4 is considered by enthusiasts to be the most alluring Ferrari of its time. Its impressive performance, exclusivity, and timeless design garnered unparalleled recognition from the global car community. These Ferrari models remain as strong as ever and continue to be a staple on the “ones-to-watch” list for market trends and benchmarks. This 275 GTB/4, chassis 09389, is handsomely finished in a striking black over green color scheme with a rich history documented by Ferrari historian Marcel Massini. It was featured as the 1967 Brussels show car before being sold new to its first owner via Garage Francorchamps. Now ready to be enjoyed by its next owner, this is a rare opportunity to own a Ferrari Classiche Red Book Certified 275 GTB/4.

1961 Aston Martin DB4 GT (Estimate: £2,000,000 - £2,500,000)
Launched at the 1958 Paris Motor Show, the bold DB4 ushered in a new era for Aston Martin and its road models. Based on the DP199/1 prototype, which won at its first race at Silverstone with Stirling Moss, the DB4 GT debuted at the London Motor Show in 1959, the year of Aston Martin’s brilliant 1–2 victory at the 24 Hours of Le Mans and World Sportscar Championship title. The DB4 GT was developed under Aston Martin racing manager John Wyer to be lighter and more powerful than the production DB4 and features thinner 18-gauge aluminum-alloy body panels with a shortened wheelbase. Built with an aluminum and twin-plug cylinder head, the Tadek Marek-designed 3.7-litre DOHC engine of the DB4 GT was extensively modified, featuring higher 9:1 compression and three Weber 45 DCOE carburetors, yielding 302 factory-rated hp at 6,000 rpm.

Chassis DB4GT.0144/L offered here is one of only 75 DB4 GTs originally built, of which only 30 were specified in left-hand drive. This example retains its matching-numbers engine per factory records and benefits from a no-expense-spared restoration by marque specialist RS Williams Ltd. in 2020. Presented in its striking original color scheme of Black Pearl over Dark Blue interior, this DB4 GT is replete with extensive service and restoration records as well as a detailed history. While rare, elegant, and beautifully presented for auction, this DB4 GT is eligible for virtually any worthy classic event. Perhaps most importantly, it stands as a wonderful touchstone to Aston Martin’s commitment to GT-class racing dominance during the 1950s and early 1960s.

1963 Aston Martin DB5 Convertible (Estimate: £750,000 - £1,000,000)
The DB5 combined sporting qualities of the previous DB5-series cars with a more mature and refined manner. Its sophisticated feeling behind the wheel was echoed in the beautiful aluminum coachwork crafted in the old-world Superleggera method by Touring of Milan. Mechanically, the DB5 reflected steady improvement over the already-superb DB4. Every DB5 was equipped with the updated four-liter Tadek Marek-designed engine, and all but the earliest examples were fitted with an excellent ZF five-speed gearbox. Other noteworthy changes included Girling braking in place of the earlier Dunlop system, standard electric windows, and a more modern charging system. A grand touring car of essentially unmatched prestige and performance, the latest Aston Martin drew universal praise from buyers, journalists, and devoted motoring enthusiasts alike.

The DB5 presented here is one of only 123 convertibles produced by the factory, making it one of the most exclusive of all road-going Aston Martins. This particular car, chassis DB5C/1261/R, was delivered new to an enthusiast in Scotland and its upcoming appearance at auction marks the first time that this remarkable car will be offered for public sale. Restored by Aston Martin specialist Post Vintage and boasting an attractive factory specification, this DB5 convertible is surely among the most desirable David Brown-era Aston Martins.

1963 Mercedes-Benz 300 SL Roadster (Estimate: £900,000 - £1,200,000)
In March 1957, Mercedes-Benz introduced the 300 SL Roadster, employing a host of mechanical advancements and stylistic revisions to transition to a new open-top version of the successful 300 SL Coupe. Chief among these were a new rear-axle design that improved handling and a modified frame that allowed for conventionally hinged doors. These features were further complemented by the addition of disc brakes in 1961 and the implementation the next year of aluminum engine blocks, which were fitted to the final 210 examples of the Roadster.  Mercedes-Benz built 1,858 300 SL Roadsters, steadily improving them mechanically until production ceased in February 1963. Only 26 Roadsters were built in 1963, and this final run represented the apogee of the 300 SL, as the ultimate and most advanced expression of the highly developed model like the one presented here. With a meticulous restoration by Swiss marque specialist Pichler GFG AG, this 300 SL Roadster is now returned to its factory-original color combination of Gelb (Yellow) over Biscuit. Comprehensively documented, this significant 300 SL Roadster is accompanied by its original matching factory hardtop, fitted luggage, tool kit, and jack. This highly revered and impressively restored Mercedes-Benz offers a unique opportunity to acquire the most developed expression of the celebrated 300 SL Roadster.

A trio of Bentleys for Geared Online The European Sporting & Historic Collection.

The collection’s prewar offerings are a duo of wonderful vintage Bentleys – the first being a late example Vanden Plas-bodied 1930 Bentley 4 1/2 Litre Sports Tourer (Estimate: £650,000 – £900,000). This 4 1/2 Litre hails from exceptional provenance, having been owned by US Le Mans veteran William “Bill” Spear. The second Bentley on offer is a 1931 Bentley 8 Litre Pointed Tail Two Seater (Estimate: £400,000 - £600,000 without reserve); a well-maintained H.J. Mulliner Saloon expertly converted in the 1960s to a unique “Speedster” specification by Fred Hoffman and ready for sporting drives and touring events. Accompanying this coupling of prewar Bentleys is a brilliantly executed 1950 Bentley B Special Speed 8 by Racing Green Engineering (Estimate: £225,000 - £300,000 without reserve). The handsome, open sports-type body inspired by Bentley’s Speed Six Team Cars is equipped with a robust Mk VI chassis and powered by a dry sump, straight-eight engine. Together, this trio is recognized by the Bentley Drivers Club and immediately eligible for numerous events.

A pair of Rolls-Royce Phantom Continentals

Consistent with the auction house’s world-renowned reputation for delivering the highest quality vehicles, the Geared Online European Sporting & Historic Collection offers a magnificent array of automotive history for every level of collector.

Preceding the online event, all available lots will be housed in one central location, just north of London, thus providing the opportunity for interested bidders to conduct on-site inspections of the online offerings. To make an appointment to view the collection, please contact concierge@goodingco.com. Online bidder registration will be available through Gooding & Company’s website and mobile apps for iOS and Android.