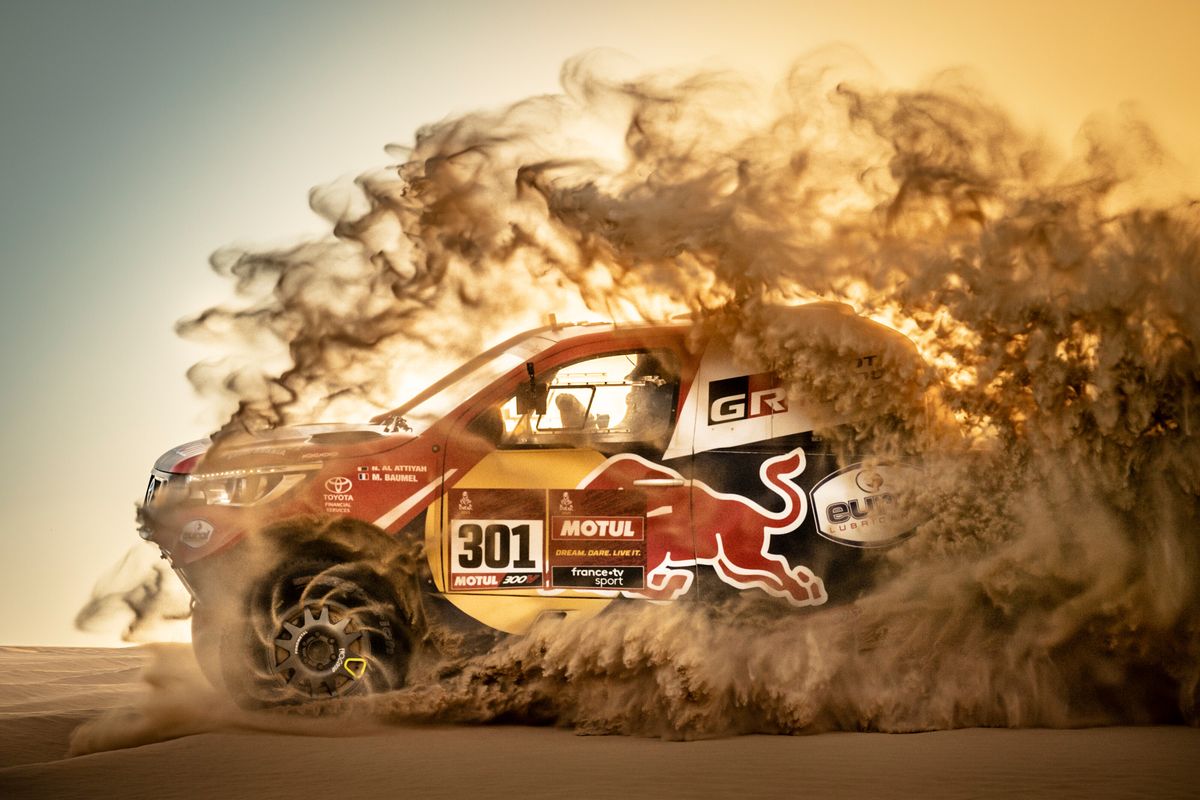 The clock is ticking to the 2021 Dakar Rally as the world’s best off-road racers converge on Saudi Arabia for next month’s start.

The prologue takes place on January 2 with the start proper the following day on its second running in Saudi Arabia following its switch from South America for the 2020 edition.

A star-studded Red Bull Desert Wings squad will be chasing glory in the various categories over the course of the 7,646-kilometre course.

- Carlos Sainz begins the car class as reigning champion and once again will be driving a MINI JCW Buggy as he attempts a fourth victory in the prestigious event. Also driving the same machinery will be 13-time Dakar champion Stéphane Peterhansel.

- Bidding to challenge Sainz and Peterhansel for overall victory are the Toyota Hilux trio of Nasser Al-Attiyah, Giniel de Villiers and Kuba Przygonski. Both Al-Attiyah and de Villiers are former winners in the desert.

- Entering the Dakar for a fifth time is Sébastien Loeb, who is hoping to improve on his podium finish last year as he debuts Prodrive’s BRX T1, which features a bespoke 3.5-litre turbocharged engine.

- Five-time winner in the bike class, Cyril Despres, is once again on four wheels but this time co-driven by explorer Mike Horn in the pair’s Peugeot 3008 DKR. It is part of their preparation to enter the 2023 Dakar with a hydrogen-powered vehicle.

- Red Bull KTM Factory Racing will be aiming to return to winning ways after their 18-year victory run at the event was ended in January. Once more, Toby Price, Sam Sunderland and Matthias Walkner will battle it out for overall glory.

- Meanwhile, Daniel Sanders will be making his debut in the team’s colours while another bike challenger will be Indian entry CS Santosh, and Laia Sanz will once more be in the mix. Two-wheel debutants will be Damille Chapeliere and Mohammed Jaffar.

- Entries in the side-by-side category will be American Mitch Guthrie Jr, who is joined by countryman Seth Quintero, the 18-year-old a rookie in the field. Also part of their Red Bull Off-Road Junior Team will be Spaniard Cristina Gutierrez, and all three will be racing the OT3 by Overdrive. Also in the SxS race is DTM and FIA World Rallycross champion Mattias Ekström while former Dakar SxS champion Chaleco Lopez should also be in contention.

- Team Kamaz Master will aim to defend their title in the truck class and have four Russian drivers going for the win: Andrey Karginov, Ayrat Mardeev, Anton Shibalov and Dmitry Sotnikov. Chile’s Ignacio Casale also returns to the truck category after two times as a quad champion.

The competitors in their own words

Carlos Sainz: “I am ready for the Dakar, both mentally and physically, and the MINI JCW Buggy is also working very well. This will be my third Dakar in a MINI, and we have improved from year to year. Of course it is possible to win again – but you get nothing for free at the Dakar. I definitely feel fast enough to challenge for the win.”

Nasser Al-Attiyah: “I am so happy to be back at the Dakar, driving the Toyota Hilux again. We won with that car in 2019, and finished second in 2020. Now it is time to go back to Saudi and challenge for victory again.”

Giniel de Villiers: “The Dakar is always a tough race, and last year proved that Saudi Arabia lived up to the toughness of the Dakar. We’re looking forward to taking on the race again in January, and we are ready for another tough challenge in the dunes and tracks of Saudi. The Hilux feels better than ever, and I’m confident that we have the right car for the upcoming race.”

Sébastien Loeb: “The car is very compact, so that makes it quite agile, nice to drive, more difficult to make some mechanic [changes] because everything is really compact, but we need a strong car that does not break and we are working on it."

Cyril Despres: “To develop Gen-Z we need a lot of data. We are competing at the 2021 Dakar so we can collect as much information as we can to help build the next generation of rally-raid cars.

Toby Price: “The Dakar only happens once a year and it’s the one that everybody wants to win. There’s always nerves and we all wonder how our rivals are going to perform. You don’t know how your performances will compare with the others until the competition gets started. That’s why I can’t wait for day one to kick off.”

Sam Sunderland: “During my first experience of the Dakar in Saudi Arabia I was really amazed by the terrain and the scenery that we passed. A huge part of the rally is adventure and discovering new places.”

Matthias Walkner: “For me personally, it would be super cool to win again but there are ten other riders who also have the skills to win. Another podium finish would be really nice.”

Laia Sanz: “I always fight to the end and in recent years I’ve sneaked into the Top 15, but last time it came out a little worse. Because of injury I wasn’t able to give my best and I want to go back and get rid of the bad taste of that experience.

Daniel Sanders: “The bike is great and handles so well, it’s really stable at speed. I know I have a lot of knowledge to gain but the rest of the team have been great.”

Mohammed Jaffar: “This will be the first time I will get to participate in the Dakar Rally. It’s a huge challenge. This race is tough on anyone, no matter your racing background."

Mitch Guthrie Jr.: “The 2020 Dakar had a lot of highs and a lot of lows and we learned so much along the way. Now we’re coming back after putting a lot of work into the car and we’re expecting even better results this time.”

Seth Quintero: “I’m looking forward to finally getting to race Dakar, it’s been a long time coming. Unfortunately I missed the 2020 Dakar because I was 17 years old, but now I’m heading there to race and I can’t wait.”

Mattias Ekström: “It has always been a dream of ours to drive the Dakar. After all, I have never driven a race car on sand or in the dunes before.”

Chaleco Lopez: “This is my tenth edition of the Dakar and I go with everything, as always, to seek first place from the beginning with my team. The idea is to fight for the lead from day one.

Andrey Karginov: “Arriving to the Dakar this year is fraught with various difficulties. Nevertheless, the list of competitors is impressive in all categories. And most importantly, given all the circumstances of the outgoing difficult year, really ambitious rivals will come to the start in Jeddah. No one wasted time. The trucks have been seriously renewed and our drivers are coming to fight for places on the podium.”