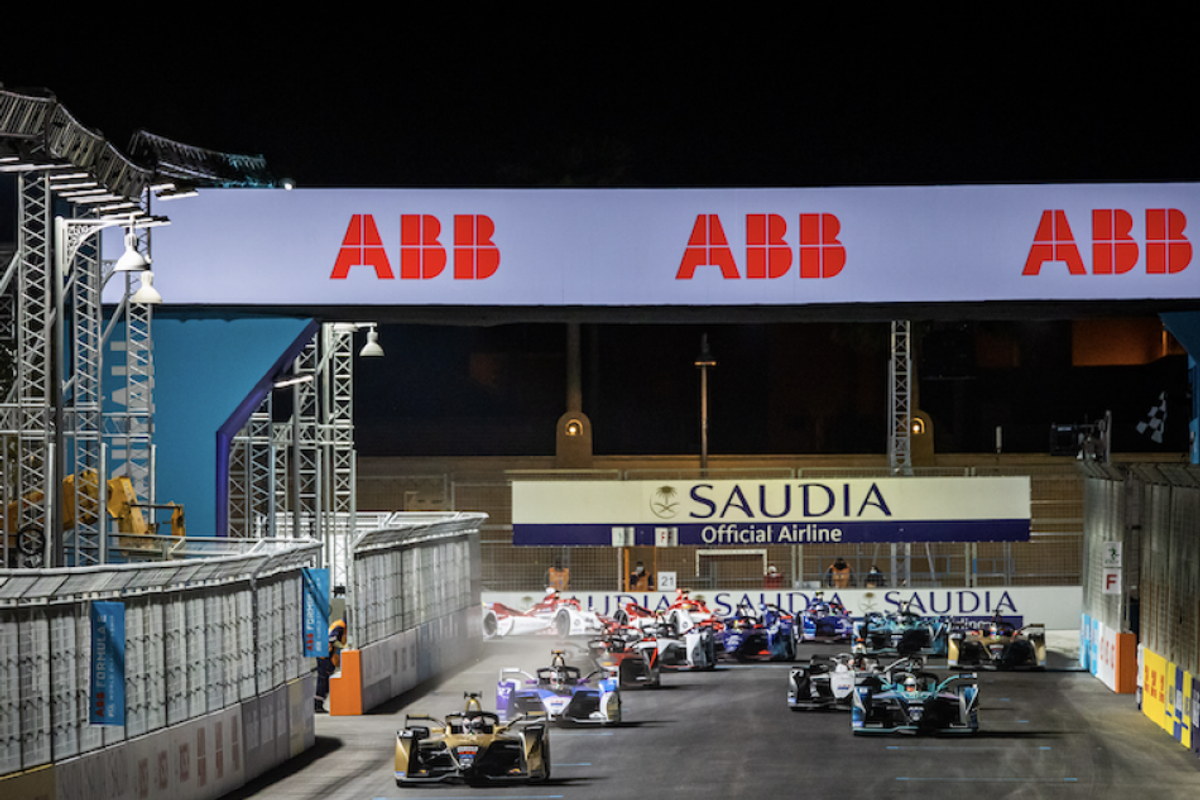 Just as he did in both free practice sessions, and just as he did in qualifying, Nyck de Vries left his competitors eating his desert dust in this evening’s opening leg of the Diriyah E-Prix, sprinting to the first victory of his ABB FIA Formula E World Championship career as Mercedes-EQ picked up from where it had left off in Berlin last summer – on the top step of the rostrum.

From his maiden Formula E pole position, de Vries made a textbook launch when the lights went out, as fellow front row sitter Pascal Wehrlein (TAG Heuer Porsche) found himself grappling with wheelspin and a Turn One lock-up that not only forced him to fight off the attentions of countryman René Rast behind, but also gifted de Vries a solid early lead.

By the time Wehrlein had composed himself to consolidate second place, de Vries was up the road, and whilst the German went on to close the gap and briefly apply some pressure, it was not long before his Dutch rival began stretching his legs again.

Even two safety car interruptions could not disrupt de Vries’ impressive rhythm, as the 26-year-old maturely handled the neutralisations in his stride, going on to take the chequered flag more than four seconds clear of his closest pursuer.

The battle for the runner-up spoils was ultimately settled in favour of Edoardo Mortara, who kept his powder dry in the initial stages before pulling off a supremely committed pass on the main straight to thread the needle between Mitch Evans and Wehrlein and spectacularly steal two positions in a single manoeuvre. The ROKiT Venturi Racing ace then took full advantage of the race’s second safety car intervention to outfox Rast for second.

Jaguar Racing’s Evans was another to demote Rast in the closing laps, pinching the final podium position from his Audi Sport ABT Schaeffler adversary and relegating the German to fourth in the final reckoning.

Wehrlein ultimately faded to fifth, struggling increasingly to maintain pace and energy on his return to Formula E, with Nissan e.dams’ Oliver Rowland following him home in sixth after trying every which way to prise open the door late on. The Briton made the best of the first group conditions in qualifying to snare a top ten grid berth, before making further progress during the race.

Lucas Di Grassi (Audi Sport ABT Schaeffler) was another big mover – the 2016/17 title-holder advancing from 16th to ninth – with Oliver Turvey claiming the final point on offer in tenth, getting NIO 333 immediately off the mark following a scoreless 2019/20 campaign.

There was disappointment, too, for Jaguar Racing’s Sam Bird and Mahindra Racing’s Alex Lynn, whose spirited scrap for sixth just before mid-distance ended in tears and a collision – forcing both into retirement and prompting the race’s first neutralisation. Maximilian Günther (BMW i Andretti Motorsport) was the only other non-finisher after side-swiping the wall in an incident that brought out the second safety car.

Happily for all three, they immediately have a chance to make amends in round two of the 2020/21 ABB FIA Formula E World Championship season tomorrow (Saturday, 20:00 local time) – but on today’s evidence, the biggest question would appear to be if anybody can beat the dominant de Vries...

"My first victory in Formula E! What a fantastic result and a perfect start to our second season. I don’t know why, but I was quite calm after the race despite the pleasure of winning. It’s been a great weekend for me so far, setting the fastest time in every session and then winning the E-Prix itself. That’s obviously a very nice feeling, but it was by no means an easy race. There were so many safety car deployments, and it was difficult to always select the right energy management. It took a lot of communication with the team, but it’s great that I was able to come home with the win in the end. Many thanks to the whole team. I know it sounds like a cliché, but everyone in our team has worked very hard over the winter to get us up here on the podium today. So again, a huge thank you to the whole squad for their tireless work. You’ve earned this victory."

"It’s good to be back on the podium, apart from the races in Berlin, last season wasn’t too bad for us. We are a small team and it isn’t easy to get good results against big manufacturers with a lot more resources than us. These results are a victory for us. We were really competitive and hopefully it is going to be the same tomorrow. It was crucial to overtake Pascal, he overconsumed after taking Attack Mode. There wasn’t much space to overtake but I went for it and was lucky. Very happy with our result today."

"I felt like I knew what Edoardo was going to do. I wasn’t going to be able to defend so it was an easy pass for him. I was more worried about Pascal but I managed to pass him at the same time. At that point it was good to keep the momentum going. The pace was quite strong and I had a very strong rhythm before the first safety car. The first safety car affected us and made us burn an Attack Mode but overall the pace was really good. Huge congratulations to Nyck and Edoardo but especially my team."