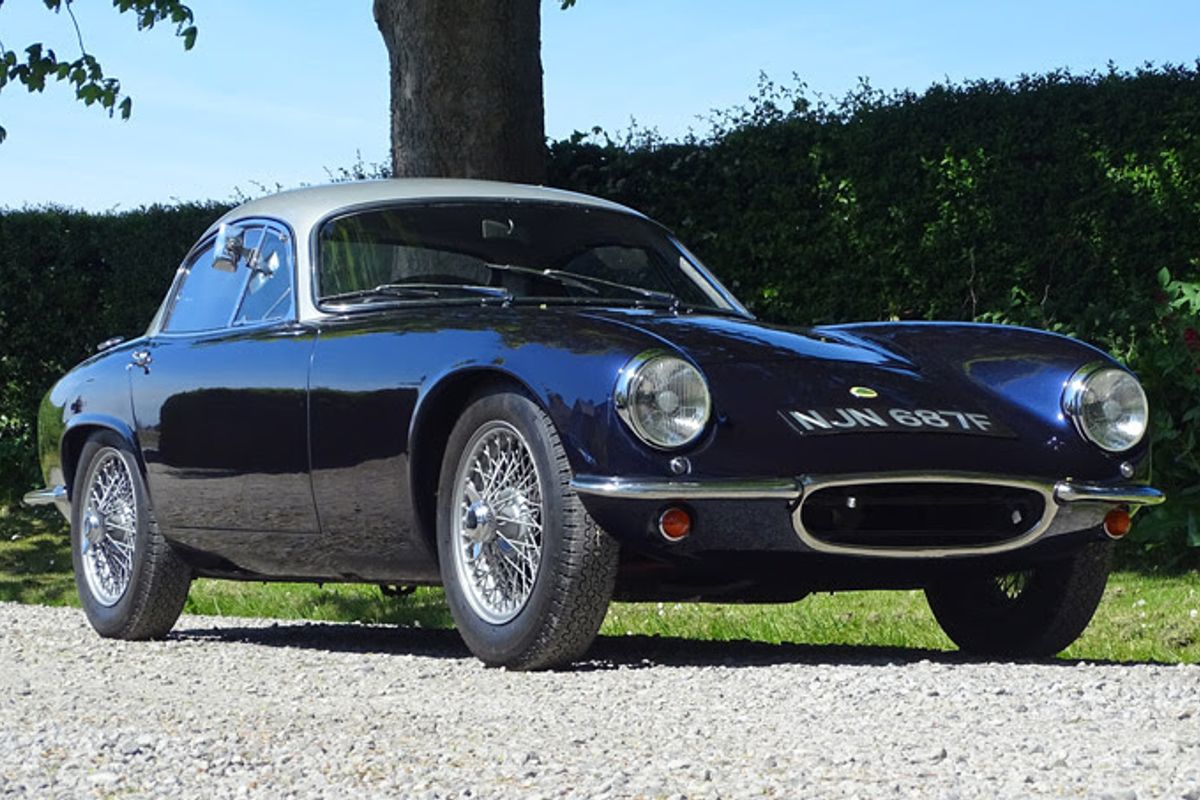 According to a typewritten report on file detailing its ownership history, this gorgeous Type 14 Elite is thought to have been sold new to a Lotus employee in 1961. Acquired by Roger Davies four years later, he crashed the Coupe probably around 1967 and rather than having its fibreglass monocoque repaired bought a replacement CBU (Chassis Body Unit) – number EB1998 – direct from Lotus. Mr Davies transferred much of the original running gear to the fresh shell but reportedly added: a new ZF gearbox, Series 1 differential cover, Lotus leather rimmed steering wheel, alloy Girling NR rear callipers; Irvin safety harnesses and 14-inch 60-spoke wire wheels. Re-registered for road use on March 1st 1968 as ‘NJN 687F’, the reborn Elite remained in his care for another four and a half decades.

Belonging to Keith Fisher for three years, the Elite entered the current (deceased) ownership via our June 19th 2019 IWM Duxford at a cost of some £63,250. Having campaigned a Type 14 in his youth, ‘NJN 687F’ represented an irresistible trip down memory lane for its late custodian. Rated by the seller as being in ‘very good overall’ condition with regard to its Coventry Climax FWE engine, ZF gearbox, electrical equipment, interior trim, bodywork and paintwork, this iconic Lotus is worthy of close inspection.

"The road manners of the Elite come as near to those of a racing car as the ordinary motorist would ever experience" (Autocar, May 1960)

Unveiled at the 1957 London Motor Show, the Elite (Type 14) was not only Colin Chapman's first production road car but also the world's first fibreglass monocoque (a contributory factor to its reputed 684kg kerb weight). Perhaps influenced by the FIA's recently introduced 1300cc GT racing class, the newcomer's specification included F2-derived all-round independent suspension and four-wheel disc brakes (inboard at the rear). Powered by a Coventry-Climax SOHC four-cylinder engine mated to four-speed manual transmission, its amazing 0.29 cd allowed all but the basic variant to claim a top speed of over 120mph. The work of Peter Kirwin-Taylor, aerodynamicist Frank Costin and John Frayling, the coupe's super sleek silhouette is still considered a masterpiece. Unsurprisingly, given its radical design (and Chapman's budget constraints), the first running prototype did not emerge until May 10th 1958.

Driven straight to Silverstone by Ian Walker, it promptly won a production sports car race against 1600cc opposition. As successful abroad as on British circuits the Elite won its class at Le Mans every year from 1959-1964. Although, the contract to manufacture the Type 14's innovative GRP monocoque was initially entrusted to Maximar boatbuilders, it was transferred after 280 or so units to the Bristol Aircaft company. Coinciding with revisions to the rear suspension layout, an improved interior and increased engine power, this switch heralded the emergence of the Series Two in mid-1960.