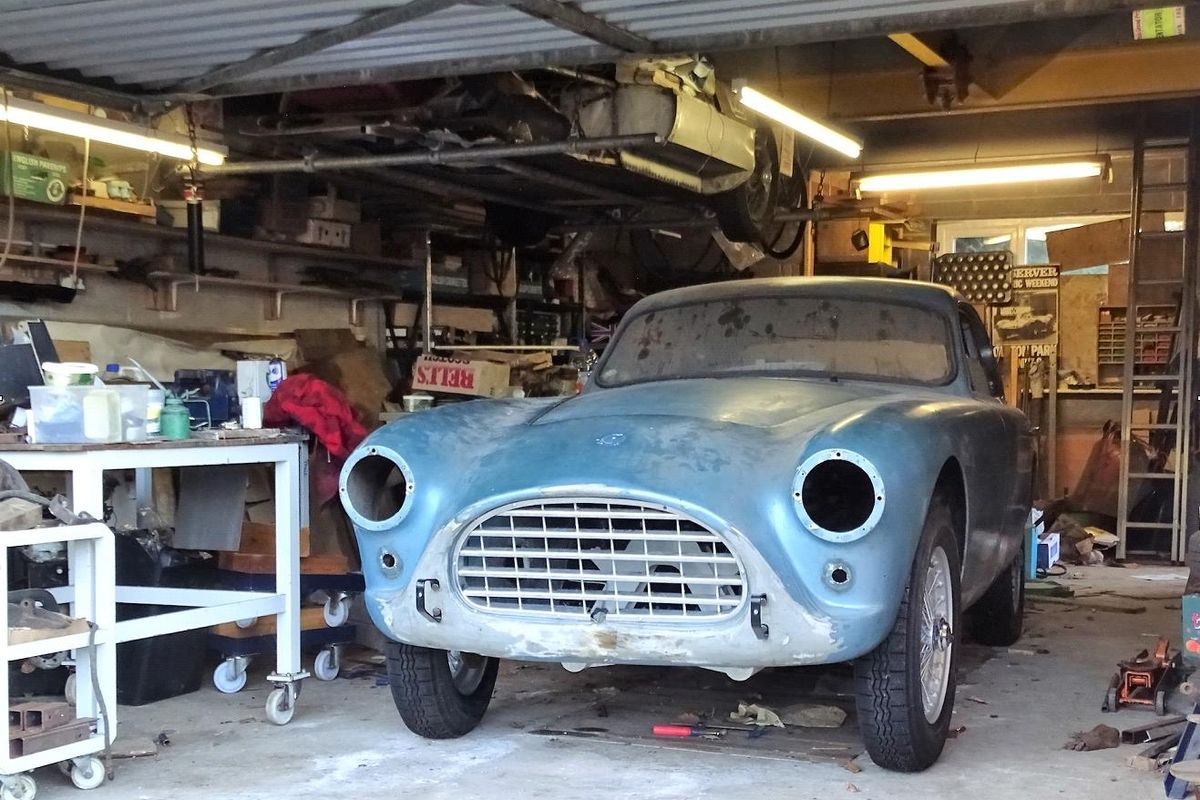 The garage collection of the late Terry Harrison - ex-Works BMC Navigator, keen amateur racer and authority on motorsport history - was sold by H&H Classics (24th March) at a Live Auction Online without Reserve.

Terry Harrison’s Princess Blue 1960 AC Aceca Bristol had been off the road for decades. Partially disassembled, it was nevertheless highly original and as such prompted a bidding war which saw it sell for a record breaking £101,200 (the highest auction price ever achieved by an Aceca Bristol restoration project). Crashed in 1975, Terry Harrison’s c.1956 Lotus Eleven Series 1 ‘Le Mans’ made an impressive £46,000, while a second, less complete Eleven Series 1 commanded £28,750.

The whole auction, including automobilia, motorcycles and cars, achieved a sale rate of 85% with a total of one million sterling (£1m). Some 800 bidders registered from Belgium, Germany, Greece, Luxembourg, the Netherlands, Singapore, the UK and the USA. Most of the cars on sale were not seen in the ‘flesh’ by buyers as the online revolution that has exploded during this pandemic year once more provided a dynamic selling platform.Damian Jones, Head of Sales for H&H, speaking after the sale said: “The content of this garage was a motor racing treasure trove – an AC Aceca Bristol and two Lotus Eleven racing cars. All three were sold as ‘garage finds’ in varying states of completion. Given the regard in which Terry was held by those who knew him I am not surprised by this interest in his automotive legacy.”

1960 AC Aceca Bristol – No Reserve
According to information kindly supplied by Richard Unwin, the AC Owners’ Club’s Aceca-Bristol registrar, this particular example – chassis BE786 – was initially earmarked for distribution via Ken Rudd of Ruddspeed fame. Completed on June 12th 1960 in Princess Blue with Red leather upholstery, the two-seater was first registered as ‘1 BMJ’ to Messrs A & R Thomas of Central Garage, Kempston, Beds on August 2nd 1960 and purchased by its first private keeper, Boyce Ian David Davis Esq at the end of that same month. A research chemist with several patents to his credit, Mr Davis kept the fixed head coupe through various address changes before selling it in 1969 to the late Terry Harrison (from whose estate it is now being offered). A former BMC Works Navigator and motorsport enthusiast, Mr Harrison is known to have hillclimbed ‘1 BMJ’ and used it as everyday transport. Seemingly taken off the road during the 1970s, the AC was quickly sidelined by numerous other projects including the Lotus Elevens it was garaged alongside and a series of BMC machinery.

As far as we are aware only twelve of the 88 right-hand drive Aceca-Bristols made featured the more powerful 100D2 engine, overdrive and front disc brakes making ‘1 BMJ’ a rare opportunity indeed especially as it has had just two private keepers from new and came to market for the first time in fifty-two years!

c.1956 Lotus Eleven S1 'Le Mans' – No Reserve
According to its accompanying green logbook, this Lotus Eleven was licensed for road use as a ‘built up vehicle’ with chassis number: ‘N.W. 204’, engine number: ‘FWA 6577’ and registration number: ‘OVB 7F’ by Greater London Council on 14th August 1967. The first owner is listed as Paul Eric Slough, an employee of Normand (Mayfair) Ltd, and numerous bills on file from Coventry Climax Engines Ltd, Borg & Beck, Hardy Spicer & Co and Len Street (Engineering) Ltd suggest that he spent much of 1966-1967 refurbishing the sports racer.

The origins of the chassis are currently a mystery but ‘N.W. 204’ should not be confused with ‘204’ which was supplied new to Ed Freutel of Los Angeles and is still apparently resident Stateside (though, another ‘204’ surfaced on this side of The Pond during the 1990s). The engine listed on the green logbook and which still accompanies the car (FWA 6577) is understood to have been first installed aboard the ex-Gerard ‘Jabby’ Crombac Lotus Eleven (‘152’) and then transferred to the ex-Le Mans 750cc Lotus Eleven (‘519’). The latter still exists in Australia albeit with a different powerplant.

Campaigned by Terry Harrison at a variety of race circuits and hillclimbs from 1972 until 1975 when a shunt at the Thruxton chicane saw it retired, ‘N.W.204’ has been awaiting renovation ever since. A Lotus Eleven convert, Terry acquired another Series 1 chassis as well as a Series 2 plus a variety of relevant spares. However, the offer of driving Tony Roger’s similar machine saw Terry’s work on his own cars shelved.

c.1956 Lotus Eleven Series 1 – No Reserve
Lotus Elevens became something of a passion for Terry who owned two Series 1 cars and a Series 2 for a time. Sadly, the chassis of the Series 2 was stolen from his back garden many years ago. The second Series 1 fared rather better having been stored in the rafters of his garage. Less complete than its sibling, it nonetheless comprises a chassis bought from Geoffrey Crossley, a Coventry-Climax FWE 1.2 litre engine, MOWOG four-speed gearbox and desirable 5.3:1 rear differential. Incomplete and in need of a total restoration, the Eleven nevertheless has the makings of an exciting project.

Such a sum would have bought a genuine RS1600 not that long ago. The Evocation was beautifully finished and combined an original 1300GT shell with a modern 2.0 litre Zetec engine. The result was a car boasting classic looks and contemporary performance with a claimed 130mph top speed!

The top selling motor bike in the sale was a 1959 BSA DBD34 Gold Star Clubman 500cc which commanded £20,250
Featuring correct numbers and restored in 2008 to a very good standard, the Clubman had formed part of a private collection for the past years. Offered for sale with BSA Owners’ Club paperwork, the ‘Goldie’ was keenly contested by UK and Continental bidders.