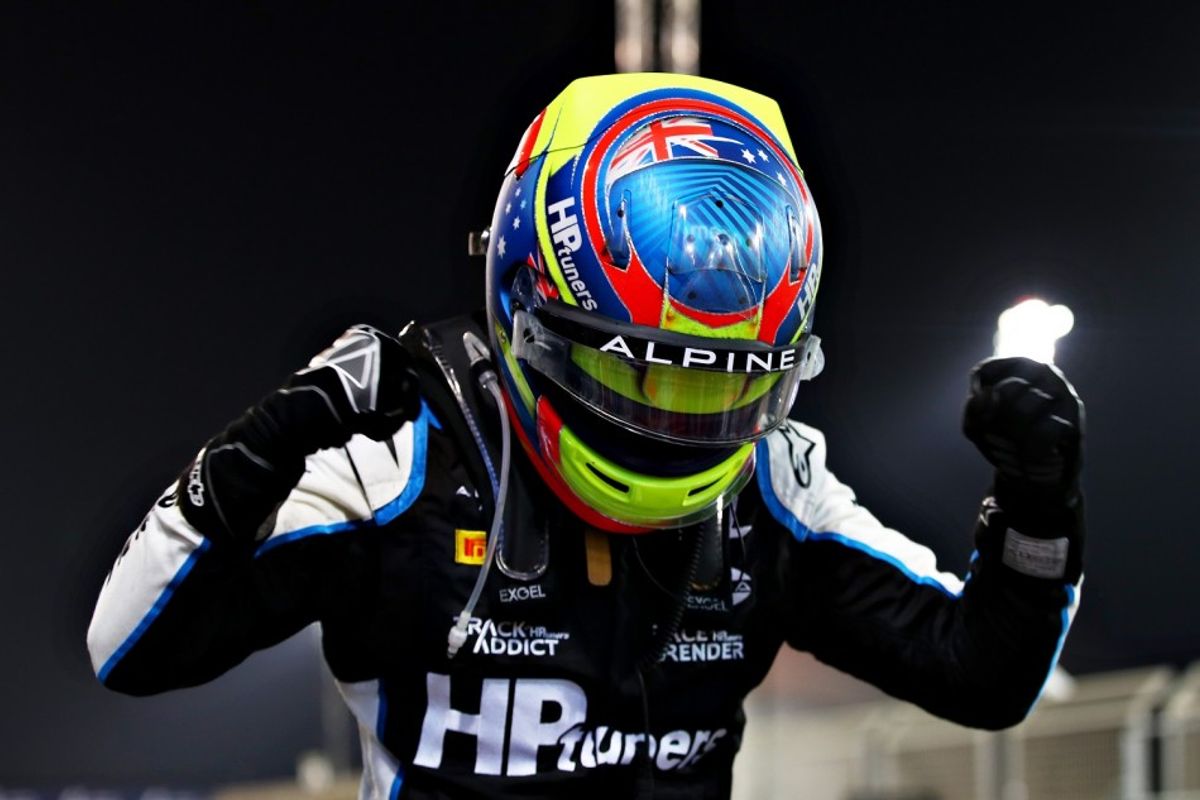 Reigning Formula 3 champion Oscar Piastri became the second rookie winner in as many races this season, completing a superb last-lap overtake on UNI-Virtuosi’s Guanyu Zhou, to win a frenetic Sprint Race 2 in Sakhir. The Chinese driver also fell foul to a last gasp move from Christian Lundgaard, dropping to third on an all-Alpine Academy podium.

It initially looked as though Zhou was set to pull off his second win in Formula 2, after boldly starting on softs, before two late Safety Cars turned the race on its head and allowed a number of the field to switch to soft Pirellis themselves. Zhou was then left to struggle to the line on heavily degraded tyres, just about holding on to third.

Piastri and Lundgaard were amongst those to change rubber, taking advantage of a late problem for Jüri Vips, who dropped out of contention, having previously looked to be Zhou’s biggest threat. Meanwhile, Red Bull junior Jehan Daruvala just missed out on a second podium of Round 1, taking fourth.

Marino Sato and Matteo Nannini both started out of the top ten but finished in seventh and eighth, behind David Beckmann in the final points places.

After his Qualifying disqualification, Vips said he just wanted to keep things clean in the second race of the day. Starting from reverse grid pole, the Hitech racer managed to do that at the start, darting into the distance with Lirim Zendeli in tow, as those behind them got tangled up.

Robert Shwartzman and Dan Ticktum were the unlucky pairing. The duo came to blows in their attempts to rise up the order and were both out of the race by the end of Turn 1.

All of the excitement brought out a Safety Car, meaning that Vips needed to nail a second getaway. The Hitech racer shrugged off the challenge and scrambled back off into the distance. Zendeli’s restart wasn’t quite as strong and it cost him P2, as Zhou launched down the side of him and into second.

The Virtuosi racer was on a mission, homing in on Vips and coolly dispatching of the Hitech racer in the same lap to steal first. Meanwhile, things went from bad to worse for Zendeli, as he was clipped by Lundgaard and suffered a puncture. The ART racer was handed a 10s-time penalty for the offence, which he served in the pits in the latter stages of the race.

Having lost the lead, Vips then found himself in a battle with his race-winning teammate Liam Lawson, who had climbed an incredible seven places to third. Keeping an eye on their battle was Felipe Drugovich, who’d put on a brilliant recovery himself, rising 12 places to fourth.

Rivalling the Brazilian for most positions gained were Marcus Armstrong and Pourchaire, the Kiwi climbing 13 places to P7 and the Frenchman up to ninth from 19th.

Lundgaard began to gain on Drugovich in fourth, which prompted the Virtuosi man to step up his chase of Lawson, sparking a three-way brawl that ended with Lawson facing the wrong way and out of the race. The Safety Car returned to clear up the mess, triggering a mass exodus of the track as a handful of drivers all dived into the pits to swap the hard Pirellis for a set of softs.

Zhou wasn’t amongst those to pit and still held the lead when the Safety Car headed back in, followed by Drugovich, Armstrong and Bent Viscaal, with the latter trio still on the hards. All four had Vips breathing down their necks from P5 on fresh soft.

All four went on the defensive at the restart and Viscaal very briefly snuck into second, but the Dutchman was too early on the breaks at Turn 1 and fell back down to P5. Vips dove into P2 at the exit and was followed through by Piastri, another who had swapped boots.

Things didn’t calm down, as a third Safety Car was required when Alessio Deledda stopped on track and retired. Nursing heavily degraded hards, Zhou’s chances of holding onto first seemed slim, yet he just about clung on at the restart, as Vips was too busy defending from Piastri.

The Australian was handed a straight shot of Zhou when Vips slowed and plummeted out of the top 10 – or so he thought. Lundgaard appeared and threw himself into the all-Alpine junior battle for P1.

The Alpine trio went three wide on the final lap and Piastri just about edged ahead, before Lundgaard daringly launched down the outside, though the move wouldn’t stick, as ART man over pushed and ran wide.

Lundgaard recovered and held onto second on track, although he didn’t appear on the podium. He had served his time penalty in the latter stages of the race, and with much happening in the pitlane and on the track, the FIA needed time to confirm whether the Dane had taken his time penalty in a proper manner. The confirmation came after the podium ceremony, and since the ART driver served it correctly, his P2 result was reinstated.

Piastri now leads the Drivers’ Championship on 21 points, with Daruvala one point behind in second. Lundgaard and Zhou are tied in third on 16 points, with Lawson in fifth. PREMA lead the Teams’ standings on 29 points, ahead of Carlin on 21 and ART on 20. Virtuosi are fourth with 16 and Hitech fifth with 15

“The second race in Bahrain and it was a crazy one. We came out on top, so I want to give a massive thanks to PREMA. It was the right strategy call from the team to go onto softs.

“I am just riding the high at the minute, second race, first win. We struggled a bit at the beginning, but I couldn’t be happier with the result .