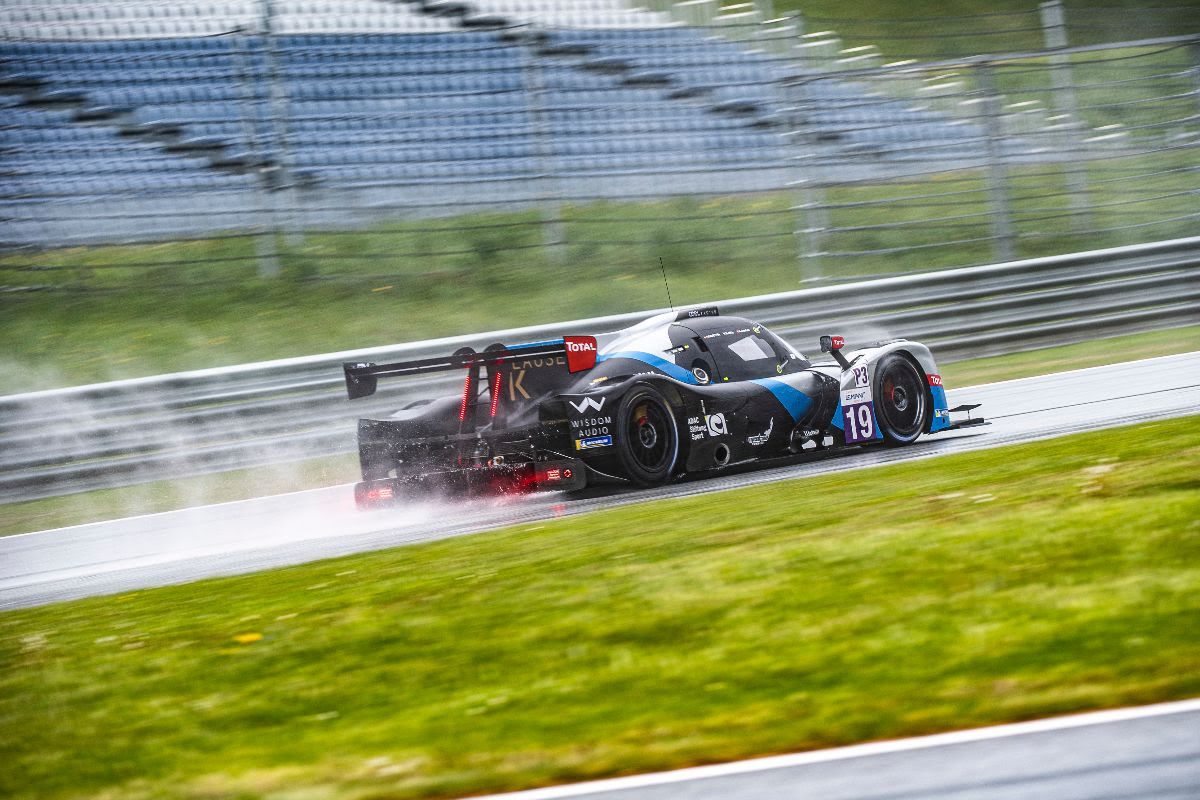 COOL Racing’s LMP3 crew took a second victory in as many races in the European Le Mans Series in a dramatic 4 Hours of Red Bull Ring.

After Niklas Krütten qualified the #19 Ligier JS P320 in sixth, Nicolas Maulini took the start and was consistently quick, moving up to second place on the first lap before handing the car over to Krütten at the halfway mark.

The 18-year-old German had to deal with difficult conditions as a sudden downpour limited visibility and made car control difficult. While many more experienced drivers went off in the challenging conditions, he drove maturely and maintained strong pace, before Matt Bell took the final stint.

The experienced Brit kept the car on the road as the conditions became even harder to read and defended in the final corners in a dramatic finish to secure the crew’s second victory and a 23-point lead in the championship.

Nicolas Lapierre qualified the #37 Oreca 07 in fourth in the LMP2 Pro-Am category, with Alexandre Coigny doing a solid job at the start. Antonin Borga and Lapierre put in good drives as the conditions deteriorated, with Coigny completing the final stint to bring the car home in its starting position of fourth.

The 2021 European Le Mans Series continues with Round 3 from Circuit Paul Ricard, Le Castellet on 6 June.

“We couldn’t have hoped for a better start to the season with two wins from the first two races! It was a very competitive race, the team had a great strategy and we didn’t make any mistakes in the car. I had a good start and overtook four cars during the first lap and secured second place. My stint wasn’t easy but I managed to get into a good position before handing over to Niklas. The end of the race was a bit stressful, like it was in Barcelona, but Matt did well to hold on for the win. It was another great weekend and we hope to continue our form in Paul Ricard.”

“Another weekend and another win, we’re really happy with the result. The race start was pretty hectic, Nicolas had a good opening lap and got up to second. He was doing well and then I got in the car as it started to rain. It got harder so we made the call to come in for wets just before the Safety Car was called out. I handed the car off to Matt and he did really well to see out the win for our second victory in two weekends.”

“My stint was a little tricky, it was a brilliant strategy from the team to get me out with a healthy lead at the end. I think we dominated the strategy calls during the race, it was a great team performance on that front and then our tyre pressures ballooned and I had no grip for the last 30 minutes, so I was hanging on a bit. The team were giving me updates on the closing gap from behind and I just had to stay on the track and keep out of trouble. I’m grateful to the team for their work and really happy to take the victory and extend our championship lead.”

“Our LMP3 drivers and technical team were fantastic today, they had an excellent strategy and I am very happy with the result. We also had better pace than in Barcelona, so we are delighted to leave Austria leading the championship after a second victory in a row. Everything is looking good for the coming events and congratulations to the entire team. We now look forward to the next round at Paul Ricard and keeping up the momentum.”

“We can take positives from this weekend even if the result wasn’t what we aimed for. The car was better than it was in Barcelona and a podium could have been possible with a bit more luck. The Safety Car came out at a bad time for us and the conditions were really tricky. We are still in a good position in the Pro-Am championship battle and we will continue to work hard on the car ahead of the next event.”

“Overall it was very constructive week, we improved the pace of the car but we are still lacking some performance in qualifying. The improvements we made since Barcelona have helped us in the race, rather than in qualifying, but Nico still gets the best out of the car. It was not an easy day with difficult weather and track conditions. When it started to rain we chose the wrong tyres but we were able to climb back to P4 in class. Obviously, we want to improve and take class victories, so we will go away and work on the car’s performance in qualifying before the round at Paul Ricard. Thanks to the team for all the work they have done this week and during the race.”

“The LMP2 race was interesting, and we found quite a lot of pace compared to Barcelona. We set some competitive lap times which is promising for the rest of the season. The strategy wasn’t perfect and we were unlucky with the timing of the Safety Car. In the end, fourth in the Pro-Am class is a bit disappointing but we still scored points and we have to take the positives to the next race in Paul Ricard.”

SMITH AND OLTRAMARE PICK UP STRONG FINISHES FOR COOL RACING

COOL Racing’s Cedric Oltramare and Maurice Smith both showed consistent pace during Round 2 of the Ligier European Series at the Red Bull Ring.

Both drivers performed well in changeable conditions during qualifying, with Oltramare showing his continued speed by taking fourth in the first session.

On his debut in the Ligier European Series, Smith put in a solid showing to take fifth in his first race in the Ligier JS2 R. Later in the day, the American again drove calmly and precisely to improve on his previous result and just miss out on a podium place in fourth.

Meanwhile, in his first season of racing, Oltramare had incredible pace capable of a podium finish and showed his improved race craft with two excellent late overtakes in Race 2. Despite his speed, two penalties limited him to fifth place.

“Both qualifying sessions went well on Friday and I was confident ahead of the two races. Yesterday morning I made a mistake on the formation lap which meant I had to start one lap down but I kept pushing and set good lap times towards the end. In the second race, apart from picking up the penalties due to a couple of small mistakes, I was happy with how it went. We had great pace and I was pleased to overtake two other cars. Without those mistakes we could have finished on the podium, so I will look to be more consistent in the next event.”

“It was a brilliant weekend, especially as this was my first time at this track and in the Ligier JS2 R. The second race was awesome, I had some good battles with Cedric and he clearly had a lot of pace. The team did a great job and I thoroughly enjoyed myself. It was a pleasure to race this car with the team this weekend.”

“Cedric continued to improve following his promising debut last month in Barcelona, and he showed he possesses good pace in the Ligier JS2 R. Unfortunately, mistakes in both races prevented him from scoring better results, but he is still learning and working hard to improve his skills behind the wheel ahead of the next round. It was great to have Mo here this weekend, he’s a positive influence on the team and he did really well on his first visit to the track in an unfamiliar car.”