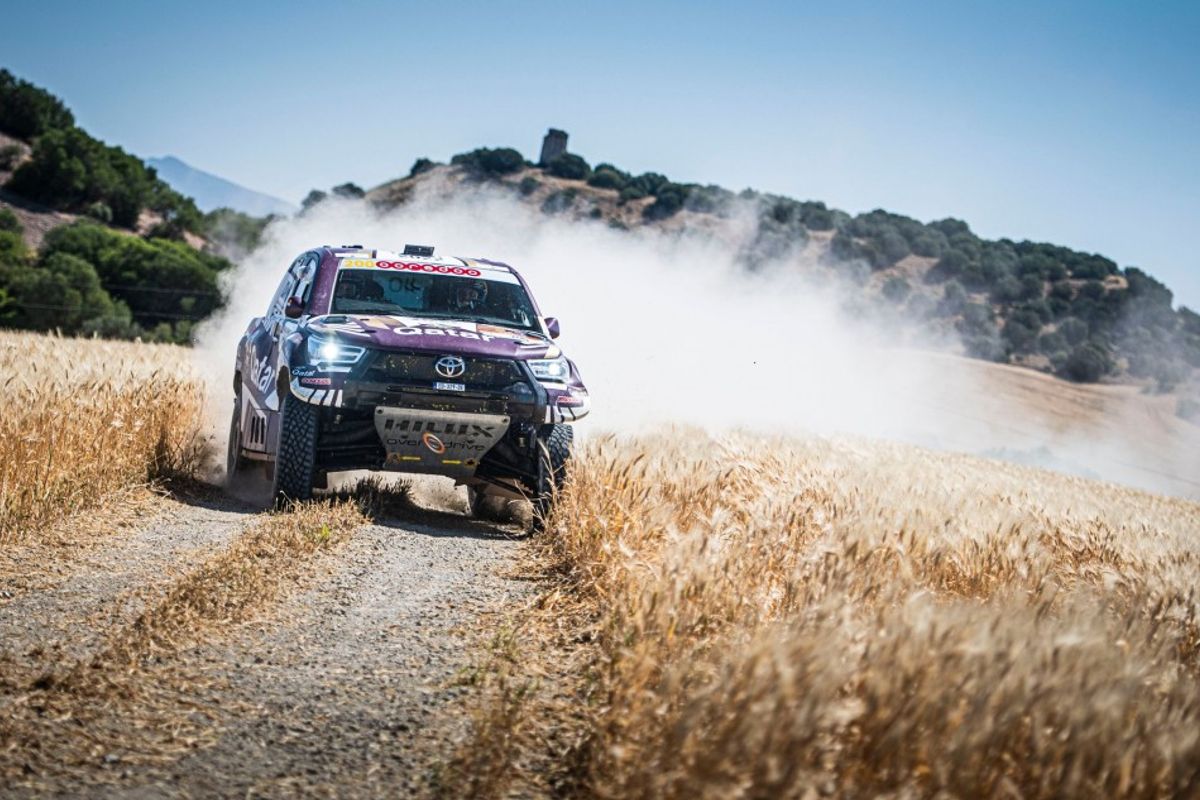 Nasser Al-Attiyah and Matthieu Baumel claimed victory in the opening round of the FIA World Cup for Cross-Country Rallies, the Andalucía Rally. The Toyota Hilux Overdrive crew finished a mere 43 seconds ahead of Carlos Sainz and Lucas Cruz after more than 10 hours of competitive driving, while Yazeed Al-Rajhi and Dirk von Zitzewitz rounded out the podium positions, mirroring last year’s results.

Al-Attiyah and Baumel were unstoppable and led from start to finish, claiming three of the five stage wins. Yesterday, on the 315 kilometre section – the longest and fastest of the event – the Qatari/French pairing had another trouble-free run, extending their advantage over Sainz with a third stage victory. Today, they were able to measure their pace to the Spaniard’s to claim a second win in Spain and become the victors of the first running of the Andalucía Rally in the FIA World Cup for Cross-Country Rallies. At the end of the stage, the duo had a winning advantage of two minutes and 43 seconds, until a penalty for leaving the defined route was applied.

Sainz spent the early part of the event gaining confidence in the MINI John Cooper Works Rally, having not competed in four-wheel drive machinery for a decade. After closing the gap to Al-Attiyah after the second leg, where he and Cruz claimed the stage win, the Spanish crew pushed hard and only lost around 20 seconds with a wrong turn in yesterday’s long section. Today, they continued to pressure Al-Attiyah and in spite of winning the final section by two minutes, lost out for a second time to the Qatari by the narrowest of margins.

Al-Rajhi and von Zitzewitz climbed the leaderboard yesterday, moving from fourth to third with a fine second overall in the section despite having no power steering in the closing kilometres. With a comfortable margin to fourth, the Saudi Arabian driver was not under pressure today and sixth was sufficient for the Hilux Overdrive crew to take the final podium position.

Erik van Loon and Sébastien Delaunay have run consistently and climbed to fourth yesterday, benefitting when Vaidotas Zala – previously third overall – lost 30 minutes changing an alternator belt in the section. Despite a puncture, they were happy with their performance and could drive to the finish unchallenged.

Zala, navigated by Paulo Fiuza, bounced back from earlier problems to take sixth while Cristina Gutierrez, co-driven by Frenchman Francois Cazalet, romped home in seventh and claimed victory in T3 on her home event. Second in the category last night, even though they had to stop and change the intercom after a water crossing, they trailed category leader Guillaume de Mevius by over 10 minutes, but the Belgian was sidelined from what would have been a great result with a mechanical problem 100 kilometres before the finish.

Spaniard Laia Sanz was another to impress in the MINI All 4 Racing. With Daniel Oliveras alongside her, she gained in confidence day by day and brought the car to the finish in eighth overall ahead of the Portuguese crew of João Ferreira/David Monteiro. Gregoire de Mevius and André Leyh rounded out the top 10.

Austin Jones and Gustavo Gugelmin won T4 after overhauling Khalifa Al-Attiyah and Frenchman Xavier Panseri, a stage win , coupled with a roll for the Qatari, moving them from second to the lead.

The second round of the FIA World Cup for Cross-Country Rallies takes the contenders to Rally Kazakhstan (June 7-13).