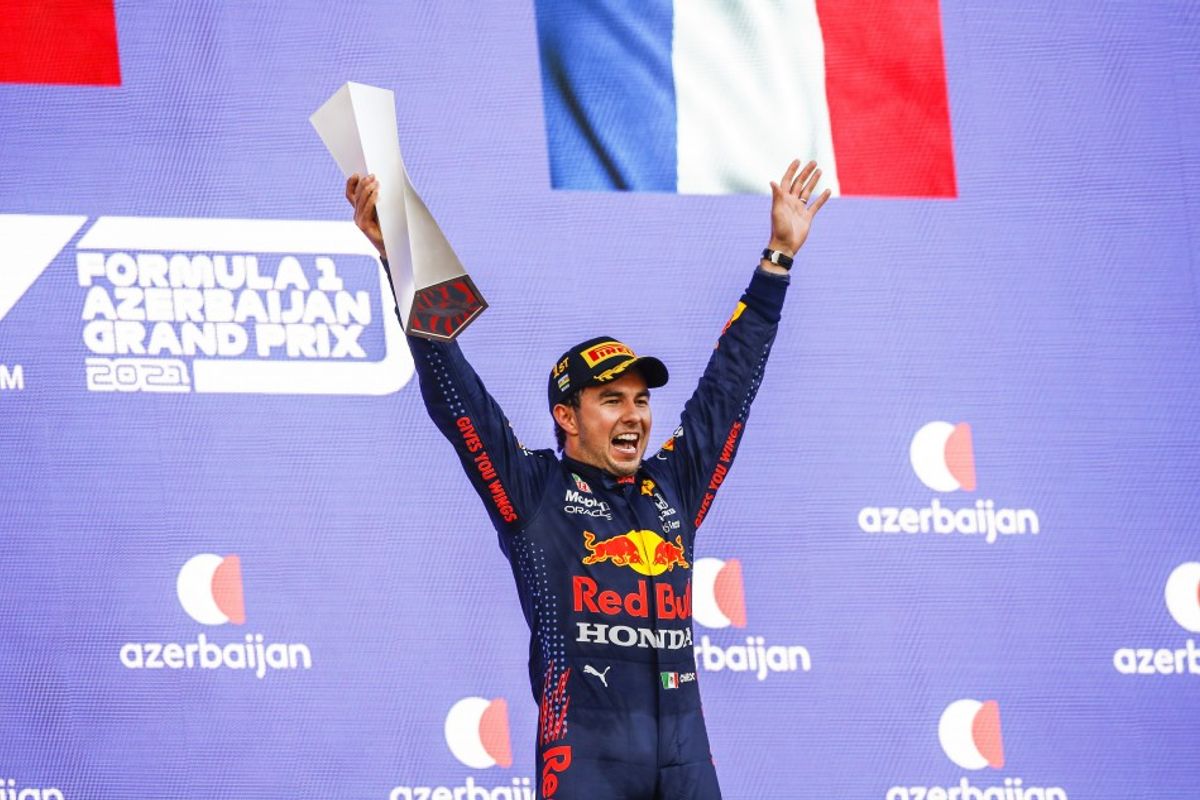 Sergio Pérez took his first victory as a Red Bull Racing driver after team-mate Max Verstappen crashed out from the lead due to a puncture with just six laps left and Lewis Hamilton finished outside the points after locking up under braking on the re-start following the red flag for Verstappen’s crash.

At the race start pole sitter Charles Leclerc got away well and took the lead for Ferrari ahead of front-row starter Hamilton. Verstappen made a solid start from third on the grid to take up position behind the Mercedes driver.

Just behind the top three Pérez made a superb start from P6 and halfway through the opening lap he was past Ferrari’s Carlos Sainz and AlphaTauri’s Pierre Gasly and had slotted into fourth place.

Hamilton then passed Leclerc on the long straight to taker the lead but with the Ferrari driver soon getting a DRS boost from the defending champion Verstappen was unable to immediately follow suit and pass the Monegasque driver.

But unable to match Hamilton’s pace, Leclerc lost DRS on lap six, however, and as the leaders crossed the line to start the next lap, Verstappen was power past the Ferrari to take P2. Pérez then repeated the overtake on the next lap to steal P3.

Hamilton headed for the pits at the end of lap 11 and moved to hard tyres, but the Mercedes driver was forced to wait on his marks for a few crucial moments as Gasly passed the Mercedes box.

Red Bull responded to the delay by pitting Verstappen at the end of the next lap. And after a quick 1.9s stop the Dutch driver rejoined ahead of Hamilton.

Pérez made his stop for hard tyres on the following lap, but the Mexican overshot his marks sligfhtly and his stop took a slow 4.3 seconds. Despite the delay he emerged ahead of Hamilton.

At the halfway mark, Aston Martin’s Lance Stroll held fourth place having not made a pit stop to switch his starting hard tyres. But on lap 30 the Canadian’s left rear tyre suffered a puncture and he crashed into the wall near to the pit entry. The Safety Car was immediately deployed and the pit lane was closed.

After a short delay while Stroll’s car was recovered racing resumed. Verstappen controlled the re-start well and kept his lead ahead of Pérez and Hamilton. Behind them a ferocious tussle for fourth developed among Gasly, Leclerc and Vettel and it was the Aston Martin driver who profited most.

He made a good move past Leclerc to steal fifth after the re-start and soon after powered past Gasly to claim fourth place.

The race then settled again with V
erstappen managing the gap to Pérez and with Mexican resisting constant pressure from Hamilton.

But the race took a dramatic turn on lap 46. As he crossed the line Verstappen RB16B slid sideways and he was pitched into the wall on the straight apparently due to an issue with his rear left tyre.

The race was quickly red-flagged and all cars returned to the pit lane. That allowed teams to change tyres ahead of a standing restart.

And when the lights went out it was Hamilton who made the best start. He pulled alongside pole sitter on the inside line as they powered towards Turn 1. But as they hit the brakes Hamilton locked up. Pérez swept through to claim the lead and Hamilton slid down the escape road. He would rejoin but finished in 15th place.