Ferrari is returning to the Goodwood Festival of Speed this year with its full product range and 5 models which are making their UK debut. Although some of these cars participated in last year’s Goodwood Speedweek, this is the first time that the brand will have showcased all these cars in the same place for the general public to see up close, and to hear as they tackle the fabled Goodwood Hillclimb.

The Ferrari Roma exemplifies the concept of the Nuova Dolce Vita. It features harmonious proportions and elegantly balanced volumes which are very much in line with Ferrari’s front-engined grand touring tradition. Timeless and sublimely refined, from a technical point of view the Ferrari Roma introduces a series of unparalleled features that put it at the top of its segment in terms of performance and driving enjoyment. These include a new powertrain with 8-speed gearbox, the introduction of the five-position manettino for the first time on a Ferrari grand tourer, and a best-in-class power-to-weight ratio. The Ferrari Roma is the most powerful and fun to drive mid-front-engined V8 2+ in Ferrari history.

The Ferrari Portofino M features a number of technological evolutions which has significantly boosted the model’s performance – hence the ‘M’ nomenclature, for “Modificata”. These include a re-designed powertrain which now features an additional 20hp, taking its maximum power output to 620hp, in-line with its close relative, the Ferrari Roma. Like the coupe, the Portofino M also features the Prancing Horse’s brand-new eight-speed gearbox and the five-position Manettino which includes a Race mode, an absolute first for a Maranello GT spider. As a consequence of these and many other new features, the Portofino M guarantees an unprecedented combination of authentic GT performance, driving pleasure, agility and exceptional versatility in everyday driving contexts.

Exactly 50 years on from the debut of the last spider in the Ferrari range to sport a front-mounted V12, the Ferrari 812 GTS hails a triumphant return for a model type that has played a pivotal role in the marque’s history since its foundation. The 812 GTS is the spider version of the 812 Superfast, from which it takes both its specifications and performance, most notably the power unit which, thanks to its ability to unleash a massive 800 cv at 8500 rpm, is the most powerful engine in its class. 718 Nm of torque guarantees impressive acceleration virtually on a par with that of the 812 Superfast while the heady 8900 rpm rev limit means that sporty driving is undiminished.

The Ferrari SF90 Stradale making its debut at Goodwood also features the “Assetto Fiorano” pack which is specifically designed for track use, rather than road. It features GT racing-derived Multimatic shock absorbers, extra lightweight features made from high-performance materials such as carbon-fibre (door panels, underbody) and titanium (springs, entire exhaust line), resulting in a weight-saving of 30 kg. Another difference is the high downforce carbon-fibre rear spoiler which generates 390 kg of downforce at 250 km/h. The Assetto Fiorano includes Michelin Pilot Sport Cup2 tyres which have a specific compound and tread pattern designed to extract the maximum performance on a circuit.

The Ferrari SF90 Spider sitting alongside the SF90 Stradale is another UK debut for the Prancing Horse at the Festival of Speed. The new convertible has the same extreme supercar specification and record-breaking performance as the SF90 Stradale yet also adds further driving pleasure and versatility to the mix, thanks to latest iteration of Ferrari’s signature retractable hard top architecture. This makes the SF90 Spider the ideal car for owners that demand the very pinnacle of Ferrari technology, but still want the thrill of open-top driving.

These 5 models are also showcased alongside the Ferrari F8 Tributo in Blu Corsa and the Ferrari F8 Spider in Giallo Modena, both the finest examples of the brand’s classic mid-rear-engined sports cars – the latest V8 models which stretch back almost 50 years to the 308 GTB which was first launched in 1976. The latest F8 models feature an iconic twin-turbo 3.9-litre V8 engine which delivers 710hp and has been voted “International Engine of the Year” on 4 occasions.

The final model in the Ferrari line-up in the Michelin Supercar Paddock at the Festival of Speed is a very unique Ferrari Monza SP2 which is based on the Ferrari 812 Superfast platform features the same 6.5-litre V12 engine but with an additional 10hp to provide a maximum power output of 810 hp. The Monza SP2 is one of only 499 cars, alongside its sister the Monza SP1 which has a driver’s seat only. The Monza SP cars were inspired by barchettas of the 1950s which were driven to victory in international motor sport not just by official works team drivers from the Scuderia, but also by a legion of gentlemen drivers who, in those years, frequently found themselves wheel to wheel with legendary professional drivers of the era.

The Prancing Horse’s illustrious motor sport heritage is also on display with several other cars from previous decades taking part in the Festival of Speed in 2021. These include a 1950 Ferrari 166 MM Barchetta, a 1961 Ferrari 156 “Sharknose”, the 1962 Ferrari 250 GT SWB 'Breadvan', a 1962 Ferrari 250 GTO, and a 1952 Ferrari 375 'Grant Piston Ring Special' which competed at the Indianapolis 500. Completing the line-up of Ferrari GT-racing cars at the Festival of Speed are a Ferrari 488 GT3 Evo 2020 which competed in the DTM series. 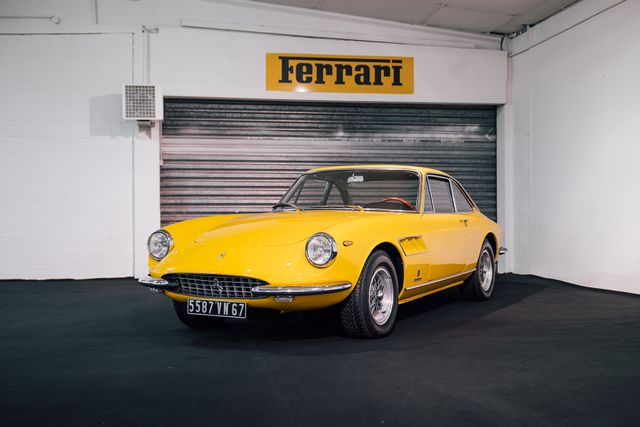