From the humblest of beginnings, in a mews garage off Baker Street, London W1, the Bentley marque rapidly achieved global fame, as an exciting and fast touring car, more than able to compete with the best of European and American sports cars, especially in the tough world of 1920s motor sport. Their outright wins at Le Mans in 1924, 1927, 1928, 1929 and 1930 are legendary, and one can only admire the Herculean efforts of such giants as Woolf Barnato, Jack Dunfee, Sir 'Tim' Birkin, and Dr Dudley Benjafield - some of the original 'Bentley Boys'.

W O Bentley proudly unveiled his new 3-litre car on Stand 126 at the 1919 Olympia Automobile Exhibition, the prototype engine having fired up for the first time, just a few weeks previously. With inspiration drawn from his achievements as a locomotive engineer, his four-cylinder 'fixed head' engine incorporated a single overhead camshaft, four-valves per cylinder, and a bore/stroke of 80x149mm, with twin ML magnetos providing the ignition and power transmitted via a four-speed gearbox, with right-hand change.

Early production, pressed-steel chassis had a 9' 9½" wheelbase (the 'short standard', TT Replica, and Red Label Speed models) before being increased to 10' 10" ('long standard' or Blue Label) in 1923, with four-wheel Perrot-type brakes added in 1924. In only mildly developed form, this was the model that was to become a legend in motor racing history and which, with its leather-strapped bonnet, classical radiator design, and British Racing Green livery, has become the archetypal Vintage sports car: coveted and enjoyed by collectors worldwide and a testimony to W O Bentley's original design, build quality and reliability.

Boasting unrivalled style and performance, the Bentley 3-litre was soon attracting the attention of wealthy and aristocratic motoring enthusiasts, including Prince George, Duke of Kent; the Prince of Wales (later King Edward VIII); and the Duke of York (later King George VI). By the time production of the 3-Litre model ceased in 1929, a total of 1,613 had been completed, the majority of which left the factory on the Long Standard chassis.

Dr Clare Hay's authoritative work, Bentley, The Vintage Years, records that 'NR 526' was completed in March 1928 on the 10' 10"-wheelbase, Blue Label chassis with engine number '1204' and Gurney Nutting (saloon) coachwork. First registered 'YV 1217', as now, the Bentley was delivered new to a Miss L Murray of London W1 - the first of only six documented (via buff logbooks) owners in more than 93 years.

Second owner M Jacobs Esq acquired the car on October 6th 1938, retaining it for more than two decades, during which time the original body was replaced with a green-hued, Vanden Plas-style tourer and engine number '742' fitted.

Two subsequent owners followed in quick succession: J Miller, London (1959) and J V R Anderson, Clwyd (1961), before it was purchased in January 1962 by M D (Douglas) McPhail of Perthshire, Scotland. The Bentley remained in single-family, BDC-member ownership for the next 58 years, passing to the current custodian (a long-time, fellow BDC and VSCC member) in June 2020.

Its body aside, 'YV 1217' remains highly original, having covered fewer than five thousand miles in more than six decades. Fully documented by photographs and invoices, a complete restoration exceeding £50,000 was undertaken by renowned specialist Roger Steer at Brentclass Restorations in 1988/1989, which included a new ash frame body, fresh metalwork, and complete overhauls of the engine and drivetrain.

Awoken from lengthy hibernation in June last year, the car has been extensively re-commissioned by noted pre-war specialists and multiple concours-winners Haslams of Bolton Ltd and Ian Evans Motor Engineers. The re-commissioning utilised parts sourced from Vintage Bentley Limited and Blockley Tyres (see invoices totalling £20,000-plus on file), while in August 2021 a complete inspection and full service was carried out by marque specialist Ewen Getley at Kingsbury Racing (£5,500 invoice).

'YV 1217' is documented by the W O Bentley Memorial Foundation and Bentley Drivers' Club, has a confirmed entry for the 2022 Isle of Man TT, 3-Litre Bentley Centenary celebrations, and a completed FIVA passport application pending.

Distinctively finished in blue, with black cycle wings and dark blue leather upholstery and carpeting, this beautifully original 3-Litre Blue Label requires no expenditure prior to use, was last offered for public sale almost 60 years ago and is, of course, eligible for numerous prestigious historic motoring events globally

The following items are included in the sale: 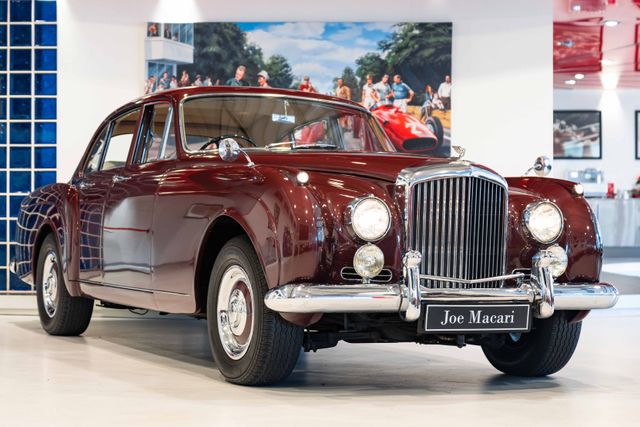