As Jan Heylen watched the two cars ahead of him slide off course, he had many thoughts........Among them was relief.

He had good reason to feel that way. The crash took out the car he was chasing for season championships in the IMSA Michelin Pilot Challenge Grand Sport (GS) class.

With 26 minutes remaining in the Fox Factory 120, Bill Auberlen and Eric Foss collided while racing for the lead into Turns 10A and 10B and both cars slid into the gravel. Heylen, running third at the time, assumed the lead and kept it to the finish.

After the crash, Foss drove his damaged No. 56 Murillo Racing Mercedes-AMG GT GT4 to the pits. Auberlen’s No. 95 Turner Motorsport BMW M4 GT4 was pulled out of the gravel and driven to the pits, where Auberlen stopped briefly next to Foss’ car before an IMSA official ordered Auberlen to continue to his pit stall.

After a review of the crash, no action was taken against Auberlen or Foss.

Without the drama, Heylen said he would’ve had a difficult time chasing down Auberlen.

“Had that not happened, it was going to be a tough battle,” Heylen said. “The BMW was extremely fast on the straightaways. It was never going to be easy to fight, even if we had the overall pace.”

Heylen held off a late challenge from Scott Andrews to win by 0.162 seconds, securing the Michelin Pilot Challenge driver, team and manufacturer championships in the No. 16 Wright Motorsports Porsche 718 Cayman GT4 Clubsport he co-drove with Ryan Hardwick.

Winning the final battle with Andrews wasn’t necessary to win the championship, but when Heylen realized he was fast enough to stay ahead and win the race, he went for it.

“I was never going to take any risk because I knew where we were in the championship,” Heylen said. “But once I saw that we had a little extra on the straightaway … I was able to drive the car a little bit differently and get a few good exits at the places that I needed it. … (But) I was definitely not going to take any unnecessary risk.”

Heylen and Wright Motorsports claimed the championships despite missing the season opener at Daytona International Speedway after Hardwick crashed during practice for the January season opener. Hardwick didn’t return until the third race of the season.

“It’s truly like a storybook, childhood dream, right?” Hardwick said. “To be able to even have a chance to compete for a championship at this level of racing -- whether you win or lose -- is something that most people will never have.”

Forty minutes into the two-hour race, Vin Barletta’s No. 96 Turner Motorsport BMW M4 GT4 crashed into a tire barrier on the exit of Turn 12 after contact with Alan Brynjolfsson in the No. 7 VOLT Racing with Archangel Aston Martin Vantage GT4.

Barletta was not injured, but the crash and subsequent clean-up delayed the race for more than 30 minutes.

Auberlen and co-driver Dillon Machavern came into the race leading the drivers’ standings by 30 points over Heylen, who ended up winning the championship by 190 points over the No. 95 Turner teammates.

Tim Lewis wheeled the No. 5 Alfa Romeo Giulietta Veloce TCR through a high-speed traffic jam, then gapped the field in the last 20 minutes of competition Friday to score the Fox Factory 120 Touring Car (TCR) class victory.

“Practice was chippy and we knew we needed to stay in the front and stay out of trouble,” said Lewis, who co-drove with Roy Block. “The team executed flawlessly. They put me out in second or third place (after the driver change pit stop) and gave me a great car to finish the race.”

With their second win of the season, Lewis and Block went from seventh to third in TCR points in their KMW Motorsports with TMR Engineering Alfa Romeo. They scored a historic victory – Alfa Romeo’s first-ever series triumph – at Road America in August.

Meanwhile, Taylor Hagler and Michael Lewis, who share the No. 77 Bryan Herta Autosport with Curb-Agajanian Hyundai Veloster N TCR, finished fifth in the race but earned the TCR championship just by starting the two-hour event. Hagler became the first female driver to win a Michelin Pilot Challenge title and the third straight year for a BHA entry to win the title.

“It’s a little overwhelming,” Hagler said, “I’m ready to do it again next season.”

Hagler and Lewis helped lead Hyundai’s charge to the TCR manufacturer championship for a second straight year. The No. 98 BHA Hyundai Elantra N TCR, which finished third on Friday with drivers Parker Chase and Ryan Norman, wound up second in the final point standings. It was the third consecutive top-two sweep in the final TCR standings for Bryan Herta Autosport with Curb-Agajanian.

The No. 94 Atlanta Speedwerks Honda Civic FK7 TCR, shared by drivers Tyler Stone and Ryan Eversley, emerged from a last-lap scramble to finish second in the race. 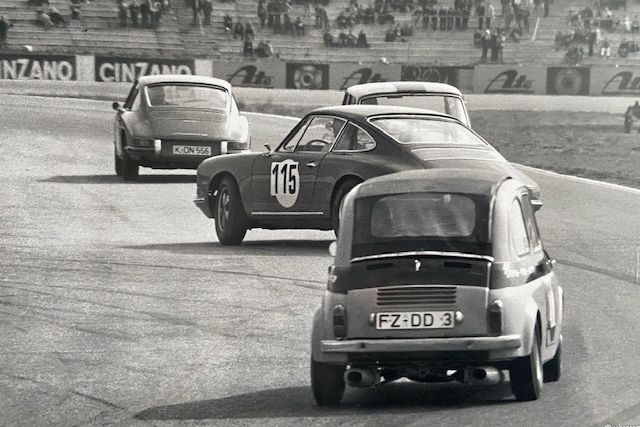