When introduced at the 1961 Geneva Salon, Jaguar's E-Type stirred passions with its extremely sleek and timeless design backed by staggering performance. The newcomer's design owed much to that of the racing D-Type. Indeed, the E-Type would be one of the last great sports cars developed directly from a successful competition ancestor.

Just as in the D-Type, a monocoque tub formed the main body/chassis structure while a tubular spaceframe extended forwards to support the engine. The latter was the same 3.8-liter, triple-carbureted, 'S' unit first offered as an option on the preceding XK150. With a claimed 265 horsepower on tap, the E-Type's performance furthered the standards set by the preceding XK models: firstly, because it weighed around 500lbs less than the XK150 and secondly because aerodynamicist Malcolm Sayer used experience gained with the D-Type to create one of the most elegant and efficient shapes ever to grace a motor car.

Developed from that of the original XK120 sports car and refined in the racing D-Type, the double wishbone, independent front suspension was mounted on the forward sub frame. At the rear the E-Type's suspension broke new ground for a large-capacity sports car, being independent at a time when most of its major rivals relied on the traditional live rear axle. Dunlop disc brakes were fitted to all four wheels; those at the rear being mounted inboard alongside the differential to reduce un-sprung weight.

Often called the most beautiful production car of all time, the E-Type remains an automotive icon of design, engineering and speed.

This extremely early, very desirable, and hard to find external bonnet-latch, flat-floor E-Type Roadster was manufactured on July 6th, 1961. This E-Type was originally finished in Cream exterior over a red leather Interior with a black convertible soft top. This left-hand drive example was dispatched from the factory on July 17th, 1961 and exported to Jaguar Cars in New York. Chassis No. 875180 is the 180th E-Type Roadster constructed out of a total of 385 'External Bonnet-Latch' Roadsters built for the North American market. The Jaguar Heritage Certificate does not have a record of the original dealership who sold the car; eventually it did end up making its way to the warm climate of Southern California.

In 2007, this early E-Type Roadster was the recipient of a documented full rotisserie restoration performed at the hands of Jaguar experts Classic Showcase in Southern California. Very strict attention to detail was given for this restoration due to the significance of being such and early and original example. This first generation XKE' restoration brought the car to show level going through all of the correct steps on a body off reconditioning. Prior to paint, the body was completely gone through and sanded down to bare metal, the metal was prepared and smoothed while all the body parts and chrome pieces were mounted to the car ensuring the best fit and panel gaps were achieved. The body was chosen to receive a fresh color change to British Racing Green, arguably one of the finest shades to adorn these beautiful vehicles. The Roadster was carefully disassembled and documented, then received primer, sealer, base coat, clear coat and finally, color sanding and buffing to result in the stunning finish seen today. New rubber and seals were installed, while a new Tan leather interior, panels, new carpets and black convertible top were custom made, fitted and installed by the talented team at Classic Showcase.

All of the systems, electrical components and other accessories were gone through, sorted, restored and replaced as needed. The correct, early edition Blaupunkt Frankfurt radio looks right at home in the beautifully restored interior. The engine, transmission, rear end and hydraulic systems all received a freshly restored treatment while getting completely resealed with new rubber and fresh hardware. Whenever possible, NOS parts were utilized during the build to make this restoration as accurate as possible. To complement the freshly completed powertrain, a UK built stainless-steel exhaust system from Bell was fitted to the car for optimum sound, longevity and performance gains. The chrome wire wheels and additional brightwork was done in high quality and still in fantastic appearance. The underbody, suspension components and Dunlop braking system was completely gone through and coated in the correct finishes.

This Series 1 exterior bonnet-latch E-Type, which retains its original engine, is one of the finest in existence. Featuring the initial, purest iteration of the famed E-Type styling, this Roadster contains the prized features unique to the earliest examples produced (of which this is), including the exterior bonnet-latches, welded louvers, and flat floors. All of these features were later abandoned in the name of practicality and production costs, and make this a particularly notable, rare example of one of the world's most iconic sports cars. Having only been driven for approximately 1,550 test miles since the restoration was completed, this XKE was additionally treated to a recent servicing by Classic Showcase to ensure the car is ready to be driven and enjoyed. Accompanying the car is a Jaguar Heritage Trust Certificate, Owner's Manual, invoices, receipts, jack, bonnet key, tool roll as well as a DVD of the restoration process. Unquestionably one of the earliest and most desirable examples of the breed, Chassis No. 875180 is a must have for any serious collector. 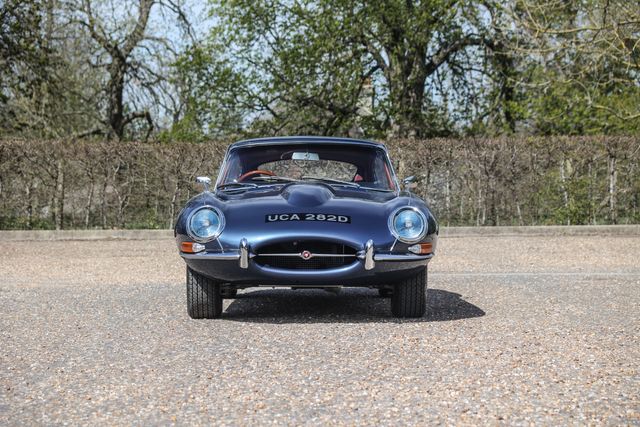