The world's first and only British Pop Art Bentley, this unique Continental GT V8 S Convertible is the result of a collaboration between Bentley Motors and the godfather of British Pop Art, Sir Peter Blake

This is your only chance to be the owner of Sir Peter Blake's unique Bentley artwork.

Sir Peter Blake
Born in Dartford, Kent in 1932, Sir Peter Blake is a British Pop Art icon, best known for co-creating the sleeve design for the Beatles' 1967 chart-topping album, 'Sgt Pepper's Lonely Hearts Club Band'. His work crosses all generational divides, and inspires immense respect from younger artists such as Damien Hirst, Gavin Turk, Pure Evil and Tracey Emin. Knighted in 2002, an honorary doctor of the Royal College of Art, and with his work represented in major collections throughout the world, Peter Blake truly is a grandee of British Art.

Peter Blake's work reflects his fascination with all streams of popular culture and the beauty to be found in everyday objects and surroundings. Many of his works feature printed materials such as photographs, comic strips or advertising texts, combined with bold geometric patterns and the use of primary colours. The works perfectly capture the effervescent and optimistic ethos of the sixties, but are also strikingly fresh and contemporary. Blake is renowned for his connection with the music industry, having produced iconic album covers not only for the Beatles but also Paul Weller, The Who, and Oasis. Lovingly brought to life by the craftspeople at Bentley Motors, this is the first luxury car designed by Sir Peter Blake.

The Design
Throughout the exterior of the car, the use of collage – a major element of Sir Peter's work - demonstrates bright but clearly defined colour. St Luke's Blue - a bespoke colour introduced by Sir Peter and named in homage to Bentley's local St Luke's Cheshire Hospice - dominates the car's rear haunches, doors, and boot lid, with a British Racing Green lower body and Fuchsia Pink radiator shell. The bright paintwork compliments the black exterior trim and a black hood, incorporating a darker sub-tone while allowing the bright exterior colours to take prominence.

Perhaps the most striking feature of this one-of-a-kind car is a St James' Red heart motif hand painted onto the Continental Yellow bonnet. The cabin is also an expression of individuality, with each seat trimmed in a different hide colour: Cumbrian Green, Imperial Blue, Newmarket Tan, and Hotspur, reflecting the tonal shades of the exterior surfaces. The same colours are echoed on the sports steering wheel, which features a Hotspur outer rim, Newmarket Tan inner rim, and Cumbrian Green centre, with Imperial Blue stitching. The vivid pink leather gear lever stands out against the centre console, while the dashboard and interior door panels are all veneered by Bentley's craftspeople in a rich Piano Black finish.

Sir Peter's signature is incorporated onto the fascia panel and embroidered on all four seat headrests. To finish, unique storage cases feature a Piano Black veneer outer but with Continental Yellow and Pillar Box red internal linings to reflect the bonnet colour theme. A distinctive treadplate, bearing the legend 'No. 1 of 1' and signifying that this is a Sir Peter Blake design, finishes the car. These unique features have been delivered through Bentley's specialist bespoke coachbuilding division, Mulliner. Entrusted with the build, Mulliner ensured that every detail was delivered to the highest standard.

Sir Peter Blake's design also includes a personalised playlist from the artist's favourite music. Sir Peter Blake himself said of his creation, 'I am proud to have been involved with transforming this beautiful car, and have enormous admiration for the people at Bentley who brought my design into being, to produce this one-off lovely car.'

Sir Peter continued: 'When Bentley approached me about this project I was excited by the challenge. Care2Save is a wonderful charity and I was glad I could do something to raise money and awareness for them. Bentley is a British icon, so I wanted to incorporate an element of that sense of tradition by using British Racing Green-alongside strong blocks of primary colour- in the design. I wanted the car to be bright and bold, keeping the design as simple as possible, so that the beautiful lines of the car could speak for themselves, but also create a design that reflected the motifs and patterns that I have used in my work throughout my career. Hopefully the finished result is joyous and unique. It was great fun working with the very skilled people at Bentley, I truly admire the craftsmanship and attention to detail they embody.'

The Process
The relationship started when the three parties - Sir Peter, Bentley and Care2Save - met for the first time at the end of 2015. Bentley wanted to create a striking car that celebrated Sir Peter's iconic style and linked to the work of Care2Save, a charitable cause of key importance to Bentley colleagues.

Sir Peter wanted to use bright primary tones on key areas of the body, so he asked Bentley which areas would work best in terms of shape and surface area. Once agreed, Sir Peter selected the desired shades from Bentley's extensive colour pallet.

Commenting on this individual commission and the Charitable Trust, Kevin Rose, Bentley's Member of the Board for Sales, Marketing and Aftersales, said: 'Sir Peter has designed a strikingly colourful car, encapsulating exactly why he is thought of as one of Britain's leading artists. It was a fascinating project to be part of, particularly for the skilled artisans in our bespoke Mulliner division, who worked closely with Sir Peter to bring this design to life.

The Car
Introduced in 2003 and substantially updated in 2015, the Continental GT is the first all-new design to emerge from Bentley's historic Crewe factory following the iconic British car-maker's acquisition by Volkswagen in 1998. Its arrival represented a new departure for Bentley, as the Continental GT bought in a new era of performance combined with extraordinary luxury never before seen. It was the main contributor to the company moving from a 1,000 car a year business to sales of 10,000 cars in 2007.

After years of speculation about what form it would take, the Continental GT made its debut at the Paris Salon in October 2002 when it was revealed that the new 2+2 coupé would be powered by a twin-turbocharged 6.0-litre W12 engine. Producing 552bhp at 6,000rpm, the latter was coupled to a ZF six-speed automatic gearbox and permanent four-wheel-drive transmission. Although considered by some to be rather brutal, the new streamlined styling was distinctive and thoroughly in keeping with the idea of a Bentley for the 21st Century. Maximum speed was within a whisker of 200mph, with the 0-60mph dash accomplished in 4.6 seconds.

A host of spin-off models followed, commencing with four-door Continental Flying Spur in 2005; the first convertible version - the Continental GTC - was offered in 2006.

With the second generation's arrival in 2011, a twin-turbo 4.0-litre V8 engine became available, which with 500bhp on tap was only marginally less powerful than the 6.0-litre W12. This new V8 motor incorporates fuel-saving 'cylinder deactivation' technology, enabling it to achieve an overall consumption of around 26mpg compared with the W12's 17. Announced in 2013, the Continental GT V8 S boasted a more powerful (521bhp) engine together with lowered suspension and improved body control to match the higher output. Other noteworthy features included an aerodynamic front splitter, discrete side sills, a rear diffuser, exclusive 20" wheels, and red-painted brake callipers, all of which was complimented by a wide range of options enabling customers to personalise their cars.

Purchased by the first owner at Bonhams' Goodwood Festival of Speed auction in 2016, the Bentley has seen very minimal use with only 834 miles recorded by the time of the last service in March 2021, some 745 of them covered in its first two years. Its minimal mileage notwithstanding, the car has been serviced regularly by Bentley dealer Harwoods of Pulborough, a total of £7,967 being spent between October 2017 and March 2021. The car is UK registered and is offered with a V5C. 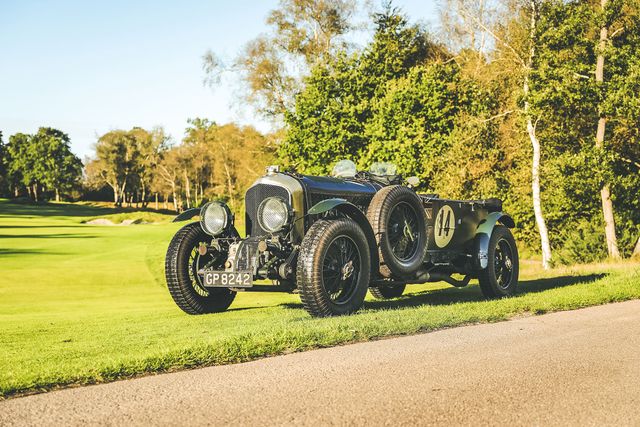