The second round of the Ferrari Challenge Trofeo Pirelli UK brought the new faces in the Trofeo Pirelli and Coppa Shell into the limelight, handing the first career wins to Andrew Morrow (Charles Hurst) and Jason Ambrose (Dick Lovett Swindon).

Trofeo Pirelli. Sikkens was immediately on the pace at Snetterton, setting the fastest lap of the weekend on just his third lap of qualifying at the Norfolk circuit, with a time of 1:52.594. In Race 1, Khera immediately put the pressure on for pole-position, snatching the lead briefly from the Dutch driver on the first lap. He couldn’t match the H.R. Owen London driver’s pace, however, who quickly recovered his position and stormed ahead to take the chequered flag with a clear 14.847 second lead over the rest of the Trofeo Pirelli pack. Khera’s Ferrari 488 Challenge Evo was second across the line with Andrew Morrow (Charles Hurst) clinging onto third place ahead of Graham De Zille (Meridien Modena) after a gruelling, race-long, bumper-to-bumper battle for the final place on the podium.

Race 2 saw Khera back in his familiar pole position, Sikkens failing to match his pace of day 1 of the weekend, starting the race in second place with Morrow in third. Initial battling De Zille behind the two race leaders, Morrow kept his nerve to break away from De Zille and keep up with the pace setters.

Coming down the Bentley straight into Brundle, both Khera and Sikkens lost traction and ended on the overrun, with Morrow following the racing line to take first place. Khera and Sikkens continued to battle behind Morrow and a second mistake from Sikkens would see his Ferrari 488 Challenge Evo off track a few laps later, slipping to fifth. This left Khera to chase down Morrow but he couldn’t catch him before the chequered flag dropped, giving Morrow his first ever race win. Sikkens made up the places, bullying his way passed De Zille on the penultimate lap to take the final step on the podium.

Coppa Shell. Race 1 told a similar story in the Coppa Shell series, with on-track foes, off-track friends Paul Simmerson (Graypaul Birmingham) and Paul Rogers (JCT600 Brooklands) battling for third position and vital championship points. Taking it to the chequered flag, it was Simmerson who clinched third, just 0.937 of a second ahead of Rogers.

Jason Ambrose (Dick Lovett Swindon) drove a spectacular race, taking his first race win with 4.932 second lead in what is his second only race weekend. Having never raced before joining the Ferrari Challenge UK series this year, Ambrose achieved a podium finish on his debut race at Oulton Park. He went one better in Race 1 at Snetterton, leading the race from flag-to-flag to earn himself the top step of the podium. Jonathan Satchell (H.R. Owen London) started Race 1 in third position but took an early opportunity to improve on this, bringing his Prancing Horse race car home in second place.

Race 2 saw the familiar on-track rivalry interrupted by new-comer Ambrose. Sitting in second behind Simmerson and ahead of Rogers, Ambrose was hungry to repeat his first place finish of Race 1. Too ambitious, he span out 10 minutes into the 30 minute race, but quickly recovered and worked hard to chase down the friendly rivals.

As the two battled, Ambrose took the opportunity to first take Rogers then Simmerson soon after. He was on the pace and stormed ahead to finish a clear 7.413 seconds ahead of Simmerson and Rogers. Just 0.620 separated second and third place, with Simmerson just managing to hold Rogers back for the second spot on the podium.

Race 2 was a challenge for drivers; overnight rain made for a wet track which was made treacherous with oil on track. Kearney held on to take first place, ahead of Peter Fisk in his Ferrari 328 GTB and Mills’ Ferrari F355 Challenge.

Race 3 saw Simpson take the top step of the podium, with Kearney in second and Fisk completing the top 3.

Programme. Round three of the Ferrari Challenge Trofeo Pirelli UK takes the cars and drivers to Donington Park Circuit, the oldest motorsport circuit in the UK still in operation, on June 25-26, with subsequent visits to Brands Hatch and then onto Silverstone for the season finale, both in September. 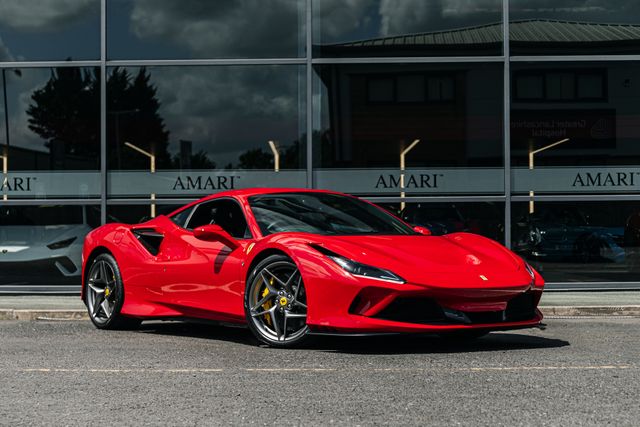