PR:
We look forward to seeing you in Paris, from June 24 to 26, for our traditional Summer Sale. On the program, a few motorcycles, including an exceptional BMW R 100 RS first hand, and in incredible original condition, and more than seventy cars... Pre-war, classics, youngtimers, and among them, current cars but also extremely rare or unique frames, due to their history or their configuration.

Have you ever seen a DB barquette that raced in the 1957 24 Hours of Le Mans? Today there is only one survivor, and we offer it for sale.

Have you ever seen a new Clio Williams since it left the factory? The one we are presenting has 15 km on the clock, and its bumpers are free of any drilling to receive license plates...

Citroënists are not to be outdone with the unique 15-Six Semi-Discoverable made by the Former Establishments Ansart and Teisseire, better known to enthusiasts under the anagram AEAT. The car has been in the hands of the same owner since 1968!

If you like Rolls-Royce, you will be served, with no less than a dozen copies in the catalog. If only one had to be retained, it would be the 20 HP bodied by Barker in 1925 and delivered new to the Maharaja of Jamu & Kashmir, an unconditional and loyal customer of the brand.

The offer of youngtimers is particularly sharp, with several first choice Alfa Romeos, but also an authentic Venturi 400 Trophy registered…

We are expecting many of you at the exhibition which will take place at Espace Champerret, from Friday June 24 at 2 p.m. until Sunday June 26 at 12 p.m., to discover our summer selection… If you cannot come, one of our specialists will be happy to send you photos and condition report of the vehicle(s) you are interested in, on simple request by e-mail.

ONE MAN, ONE COLLECTION

You will have certainly noticed that our summer sale will disperse no less than four collections. Among them, those of Pierre-Henry Mahul, an essential figure in our micro-cosmos, to whom we leave the floor, to tell us about his passion for the automobile:

“ From my early childhood, adults had fun asking me to recognize cars in the street. My status took a new turn, a sort of family recognition one day in 1962, when I was three years old and we were at a red light in our turquoise Peugeot 404. My father at the wheel, his father sitting next to him, me in the back; my father asks me if I know the car in front of us. Without hesitation I reply: “It's the new Ford Taunus! ". "Of course it's written on it," my grandfather said. But, not a little proud, my father added: "Yes, but he can't read..." A few weeks earlier, I had memorized his pretty almond-shaped rear lights in the Auto-Journal that my father bought and of which I I was only able to understand the beautiful drawings of René Bellu.

In the 1960s, we spent our holidays in Spain on the Costa Brava, it was a permanent parade of all the cars in Europe. What a delight for me to discover each year, in real life, the cars that I only saw in the press. I remember the emotion of discovering the new Jaguar XJ 6 4.2, dark green with its light beige leather and varnished wooden dashboard with multiple buttons. I wanted one like this when I grew up! There were also a lot of classic cars that I had never seen in the Auto Journal: old round BMW 2600s, DKWs, Glases, Borgwards, Opel Kapitans full of chrome and, of course, Mercedes and English! Very few Italians apart from Fiats, very rare Ferraris or Maseratis, and a few Lancias. Posh Italians shouldn't come to Playa de Aro. It was the English who had the most interesting and bizarre cars, the Germans and the Swiss the neatest. The Belgians were the only ones with American cars that impressed me but didn't really appeal to me... Until the appearance of the Ford Mustang. At the same time and on these same shores, I discovered the sea and sailing which was to become my other guide in my life…

All these cars that marked my childhood, I wanted to own them, since my first, a Triumph Herald 1200 convertible, followed by a Florida, English cars of all kinds, and a number of Alfa Romeos, with a Maserati Mistral, then half a dozen Peugeot 504s and 604s in Africa and Algeria. I had owned a hundred cars before buying my first garage in 1987. At the time I was not really aware of the phenomenon of old cars, they were just (more or less) beautiful old cars. occasion that I could afford and which I changed often because I drove a lot, always fast.

After satisfying my dream of sailing around the world, I had the chance to take over the garage of my in-laws, founded by Jacques Savoye, and thus gain access to the finest car brands and the finest races in the world. world. How many rallies, circuits, evenings spent with the mechanics to make tomorrow a new race start? How many beautiful encounters and unforgettable memories? Today, at the turn of my third life, in order to free myself to prepare for the challenge of the Global Solo Challenge 2023, the race around the world solo non-stop which after my Cape Horn in 2021 will be the highlight of my life. sailor, also thanks to Gautier Rossignol whom I have always known and who is also a collector at heart and a pilot, I agreed to become reasonable, and to part with the major part of my collection. I hope that these cars that I love will bring you all the pleasure and satisfaction that each of them has given me. »

Other auction highlights include: 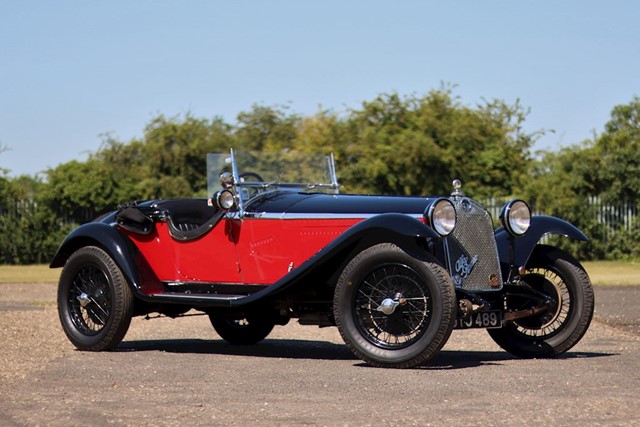