eading the lineup of extraordinary, low-mileage supercars is a 1994 Bugatti EB110 Super Sport, a 2004 Ferrari Enzo, and an outstanding 1995 Ferrari F50

Globally recognized auction house, Gooding & Company, will present a selection of exceptional supercars from the 1990s to the present day at its signature Pebble Beach Auctions on Friday, August 19 and Saturday, August 20. These iconic, well-preserved supercars, presented in immaculate condition and with remarkably low mileage, will join the diverse selection of offerings during the two-day event hosted by the official auction house of the Pebble Beach Concours d’Elegance® this summer.

“In recent years, we have seen tremendous demand for iconic, modern-day supercars, especially those from recognized, well-established marques like Ferrari, Porsche, and Bugatti,” stated Gooding & Company Senior Specialist, David Brynan. “Buyers of these cars want the finest examples with low mileage, unique specifications, and interesting provenance. This collection of supercars that we are presenting at Pebble Beach meet all of these criteria, and are among the finest examples extant.”

1994 Bugatti EB110 Super Sport (Estimate: $3,000,000 – $3,500,000)
The Italian Bugatti S.p.A. developed its signature model, the EB110, to commemorate Ettore Bugatti’s 110th birthday in 1991, representing the marriage of the very best of French heritage and Italian engineering. The EB110, which quickly became one of the most desirable supercars of the 1990s, was available as either the EB110 GT, or the more exclusive EB110 Super Sport. In total, only 136 examples of the EB110 were completed, and of those, just 30 were production Super Sport models, making them the rarest and most desirable of all. The 1994 Bugatti EB110 Super Sport presented here is today one of the most well-preserved and sparingly-used EB110s in existence, and displayed just 991 kilometers at the time of cataloguing, making it surely one of the lowest mileage examples extant. Finished in the rare color of Grigio Chiaro Metallizzato, this example was serviced by B. Engineering S.r.l. in Italy in 2019, and then entrusted to Pebble Beach award-winning firm, Motion Products, Inc. of Neenah, Wisconsin, for cosmetic work. A brilliantly preserved and well-maintained example, this special EB110 Super Sport presents an opportunity to acquire an exceptionally rare iteration of a 1990s European supercar.

1995 Ferrari F50 (Estimate: $4,500,000 – $5,500,000)
In 1995, Ferrari unveiled the brilliantly engineered F50 supercar, highlighting the use of authentic Grand Prix technology with the purity of a free-revving, naturally aspirated V-12 engine. Its Pininfarina designed bodywork was inspired by Ferrari’s famed Mythos concept car, featuring a carefully refined wind tunnel and underbody aerodynamics. Once announced, the F50 was extremely rare and difficult to access,with only 349 examples built in total. Of those, just 55 examples were specifically built for the US market, including the 1995 Ferrari F50 offered here. Finished in the definitive Rosso Corsa (Racing Red) livery, this example has been driven just 6,200 miles and is offered with rare factory delivered accessories, including its hardtop crate, luggage, books, tools, and presentation book. It comes to market with exceptional provenance, having been formerly owned by heavyweight champion boxer Mike Tyson. Having undergone comprehensive service work performed by Ferrari of Fort Lauderdale in 2022, this stunningly rare F50 presents an important auction opportunity that simply cannot be overstated.

2004 Ferrari Enzo (Estimate: $3,500,000 – $4,000,000)
The Enzo is without a doubt one of Ferrari’s most important supercars, named after the legendary founder of the iconic Italian marque, il Commendatore himself. Deeply rooted in Formula 1 technology and boasting angular, sleek bodywork styled by Pininfarina designer Ken Okuyama, the Ferrari Enzo is a supercar sensation, both mechanically and cosmetically. The 2004 Ferrari Enzo offered here is one of just six Enzos finished in the exceedingly rare color of Grigio Titanio, and is one of the most desirable examples to ever come to market. It is an extremely low-mileage example, displaying less than 2,730 miles at the time of cataloguing, and has been flawlessly maintained. Coming to auction with a Ferrari Classiche certification, this dashing Enzo would make a stunning addition to any refined collection of important Ferrari supercars.

1990 Ferrari F40 (Estimate: $2,750,000 – $3,250,000)
The breathtaking F40 was the final automotive project overseen by Enzo Ferrari before his passing, making it a significant model and milestone in the history and legacy of the Italian automaker. The 1990 Ferrari F40 presented here, featuring coachwork by Scaglietti, is the 77th of only 213 US-specification F40s built, and comes to auction with a notably well-documented provenance, having been exclusively owned by collectors from new. This exceptionally original example showed just 1,800 miles at the time of cataloguing, and is accompanied by a Ferrari Classiche Red Book, as well as a report by veteran Ferrari historian Marcel Massini. The current owner, who acquired this F40 in 2018, employed his in-house, Ferrari-trained technician to perform a thorough service and detailing to the highest standards. Subsequently, at the 2021 Ferrari Club of America Annual Experience, this F40 received four of the club’s most prestigious honors, where it was awarded the Coppa GT, Coppa Bella Macchina, Outstanding Supercar, and 100-Point Platinum Award.

2019 Ford GT (Estimate: $900,000 – $1,100,000)
The modern iteration of the Ford GT pays homage to an extraordinary high point in Ford Motor Company history while also looking towards the present and future as a true modern American supercar with Le Mans racing pedigree. This sensational 2019 Ford GT offered here is finished in the stunning and desirable livery of Liquid Blue Tri-Coat with stripes in Frozen White, and also features silver brake calipers and a “Dark Energy” interior. A one-owner example that has barely been driven, this Ford GT displayed an incredibly low figure of just 36 miles at the time of cataloguing. Offered with its original window sticker and fitted car cover, this example proves to be a significant auction occasion for any collector keen on one of the greatest American supercars ever made. 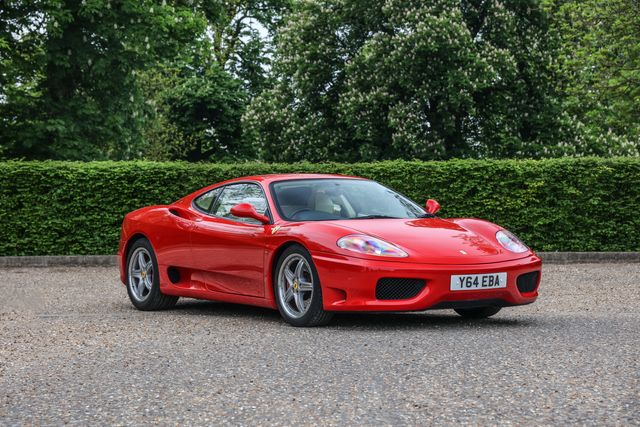