Drawing high praise is an extraordinary accomplishment in the heady world of Ferrari ownership, but then, the F40 is an extraordinary creation, one that literally re-established Ferrari at the summit of automotive design and performance after an era of waning fortunes. This stunningly beautiful 1990 Ferrari F40 Berlinetta won the Ferrari Club of North America’s prestigious Platinum Award and the Special Merit Award at the club’s 2018 National Meet at Watkins Glen, dramatic achievements that caused National Meet Chief Judge Brian Crall to effusively proclaim it one of the most authentic F40s he has ever judged. This F40 is an opportunity for a new owner to join the Ferrari elite.

The F40’s origins can be traced back to the marvelous 1984 288 GTO, a limited-production homologation special designed to qualify for FISA’s Group B rally championship series. When Group B competition proved too dangerous to continue, the series was canceled, leaving the 288 GTO without a formal competition venue. Nonetheless, potential buyers clamored for a piece of the action, prompting Ferrari to increase the homologation run of 200 cars to a total of 242. (The limit on production caused 288 GTO values to soar in the open market, a phenomenon that Maranello noted with an eye to the profit potential of future “special” Ferraris.) So began the modern era of the “instant collectible” automobile.

The second-generation GTO’s red-hot status with top-tier collectors notwithstanding, it had one glaring fault. It wasn’t as fast as the car it would have faced in Group B: the Porsche 959. To answer that challenge, Ferrari began construction of another 20 ultra-lightweight, more powerful “Evoluzione” models, but the end of Group B also spelled the end of the Evoluzione program. Only five were built, but they were soon repurposed as test beds for the development of a ground-breaking new road car, conceived by Enzo Ferrari himself, that would mark a return to the company’s historical roots. That car was the F40, the final supercar commissioned by Enzo Ferrari.

In a rare public appearance before an audience of the world’s automotive press on July 21, 1987, the 89-year-old “il Commendatore” presided over the introduction of his new creation, which sat at the center of the Maranello Civica’s darkened hall draped in red cloth and lit by a cluster of spotlights. Seated at the head of the speaker’s table in the crowded venue, Ferrari was met with extended applause, then endured a wave of flashing camera strobes before the commotion subsided and he began speaking through an interpreter:

“On July 6 last year, I asked my research department to look into the feasibility of building an exceptionally powerful sports car incorporating the very latest developments in engine and assembly technology. Only six days later, the directors gave the project their blessing, and now, barely a year later, the finished car stands before you. It is 40 years since the first Ferrari left the factory. On March 12, 1947, the 125 S was presented to the public for the first time. On May 25 of the same year, Franco Cortese won the Rome Grand Prix, driving a Ferrari. Now, 40 years later, the Ferrari F40 demonstrates that Ferrari is still a byword for technological excellence and exceptional performance.”

Also present at Ferrari’s command performance were the company’s managing director, Giovanni Razelli, Pininfarina Research and Design Chief Dr. Leonardo Fioravanti and Senior Ferrari Engineer Nicola Materazzi, who had also led the development of the 288 GTO and Evoluzione. Together, they had taken to heart fellow Ferrari executive Giovanni Perfetti’s comment to Autocar that, “Customers have been saying our cars were becoming too plush and comfortable. The F40 is for the most enthusiastic of our customers who want nothing but sheer performance.”

To achieve that end, the F40 development team drew heavily on Ferrari’s contemporary Formula 1 technology, but tradition also had its place in the process. Closely based on the 288 GTO, the chassis was a conventional layout comprising parallel, large-diameter steel tubes carrying drivetrain and suspension mounting points, but instead of the usual metal box reinforcements, carbon fiber composites, Kevlar and Nomex were molded into the necessary shapes and bonded to the chassis with structural adhesives, producing an overall structure that was 20% lighter and three times stiffer than an all-metal unit. The same composite materials were used to form the F40’s beautifully sleek bodywork, which was sculpted in the Pininfarina wind tunnel and executed by Scaglietti to exquisite results.

Not surprisingly, Pininfarina’s work on the interior incorporated the same dedication to the F40’s purely functional mission. The driver is faced with a padded, small-diameter steering wheel fronting a tightly shrouded cluster of Veglia Borletti analog instruments, large, racing-style, drilled aluminum pedals and that famous gated shifter. The form-fitting red seats are lightly but firmly padded, but frills are conspicuously absent; most surfaces are bare carbon fiber, except where glare is eliminated with unobtrusive black flocking. The doors, which weigh only three pounds each, including hardware, are closed with a simple cord.

If the F40’s various features compete for attention, the winner has to be the sensational 3.0L DOHC V-8 powerplant proudly displayed beneath the massive, vented Plexiglas backlight. Bristling with twin water-cooled IHI turbochargers, air-to-air intercoolers, four valves per cylinder, sequential fuel injection and a sophisticated Weber-Marelli management system, it produces 478 HP at 7,000 RPM and 425 lb-ft of torque at 4,000. With the F40’s curb weight of just 2,425 pounds, this undisguised full-race engine and associated 5-speed gearbox made the F40 the first production automobile capable of exceeding 200 MPH.

Completed in 2017 after a two-year restoration by a noted Ferrari expert, this Platinum Award-winning 1990 Ferrari F40 is without doubt one of the finest of its kind, ready to provide its new caretaker with the impossibly rare thrill of driving one of Enzo Ferrari’s purest creations, an experience shared by few others in the world. With just 15,542 miles and coming with a tool roll, tire inflator and service records since 2014, this F40 will be a unique opportunity to join the ranks and share in that experience. 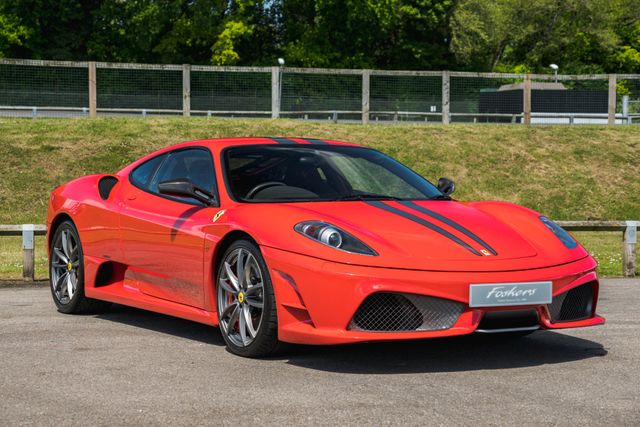