Car Highlights
One of Only 10 Examples of the 934/5 Built; Originally Delivered to Ludwig Heimrath

Launched in 1976, the 934 was built by Porsche to campaign in FIA Group 4 GT class racing, replacing the venerable Carrera RSR 3.0. While the new model was based on the production 930 Turbo, very little – aside from the road car’s body shell and engine block – remained unchanged during the transformation into 934 racer.

FIA regulations required a near-standard body configuration and minimum weight of 1,120 kilograms (2,470 pounds). Accordingly, the 934’s interior was replete with racing essentials and aluminum roll cage. The suspension gained adjustable Bilstein coil-over shocks, while stronger hubs and brakes were courtesy of the 917 parts catalogue. Bodywork was revised to include a more pronounced front spoiler with inlets for an oil cooler and air-to-water intercoolers, and fiberglass fender flares to accommodate wider BBS 16" center-lock alloy wheels.

For 934 duty, the 930’s standard 930/75 air-cooled, flat-six engine received a larger KKK turbocharger, stronger pistons, and enlarged intake and exhaust ports. Producing a reported 485 hp at 18.5 psi of boost, the 934 was capable of 0–100 mph in about 10 seconds, and a 163 mph top speed. During testing with a 934 prototype, driver Manfred Schurti lapped the Nürburgring Nordschleife 15 seconds quicker than the outgoing Carrera RSR 3.0 – an early indication of the car’s potential.

During its inaugural season, the 934 achieved considerable competition success including winning the European and Trans Am championships. Porsche also developed an even stouter 935 model for FIA Group 5 special production cars. Based on the 934, the twin-turbocharged model featured widely exaggerated bodywork, and a prodigious rear wing. The 935 dominated the competition, winning almost one-third of all races in which it was entered, including Le Mans outright in 1979.

Porsche 934/5 chassis 930 770 0958 was the eighth customer-ordered 934/5 built and sold to German-born Canadian Ludwig Heimrath. Trained as a mechanic and the owner of a Porsche dealership in Scarborough, Ontario, Canada, Heimrath was also a talented racer who secured the 1961 Canadian Sports Car Championship driving a Porsche 718 RS 60, and campaigned in the Trans Am series GTO class with a Carrera RSR.

During the 11-round season of 1977, Heimrath would wage a fierce battle for the Trans Am Championship in this 934/5 against archrival Brumos Porsche owner Peter Gregg (driving chassis 930 770 0952), scoring seven top-two finishes, including an impressive overall win at the Mosport 6 Hours. Gregg would ultimately win the championship on points; however, Heimrath successfully protested, claiming Gregg’s car was unfairly modified, and the laurels were awarded to him.

Heimrath later converted the car to 935 specification, and then continued to campaign it until the early 1980s when it was retired from competition. This 934/5 is thought to have passed through Rivard Compétition, but its history during this period is largely unknown. In 2006, it was purchased by the consignor from Porsche specialist Andre Gaudet of Québec.

Shortly thereafter, well-respected specialist Jerry Woods Enterprises was entrusted to prepare the 934/5 for use in historic motor racing, including rebuilding the engine, regearing and refreshing the transaxle, overhauling the suspension, and installing a new fuel cell. Currently equipped with 935 double-bubble manifolds and twin turbochargers for increased power delivery and driveability, this 934/5 has appeared at various iterations of the Monterey Motorsports Reunion, Rennsport Reunion, and the 2017 Classic 24 Hour at Daytona among others.

This 934/5 is accompanied by a spares package including its original fuel cell, large single turbochargers, manifolds, additional wheels, and extensive documentation, such as a factory instruction manual, parts catalogue, historical correspondence, race history, receipts, and service invoices. Eligible for a multitude of vintage racing events, this rare, 1977 Trans Am Championship-winning Porsche 934/5 boasts an impressive pedigree and a wealth of opportunities for its next caretaker.

*Please note that this vehicle is sold on a Bill of Sale. 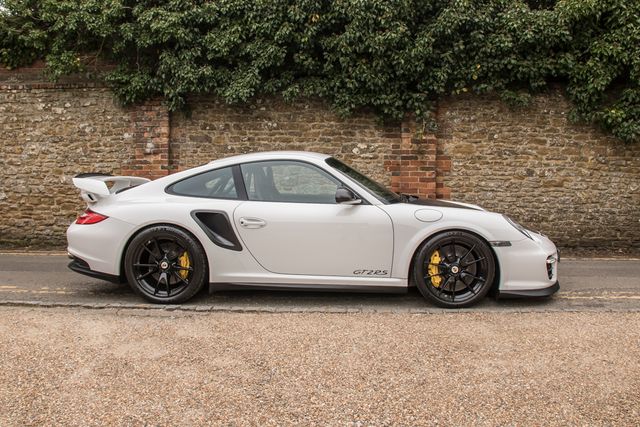