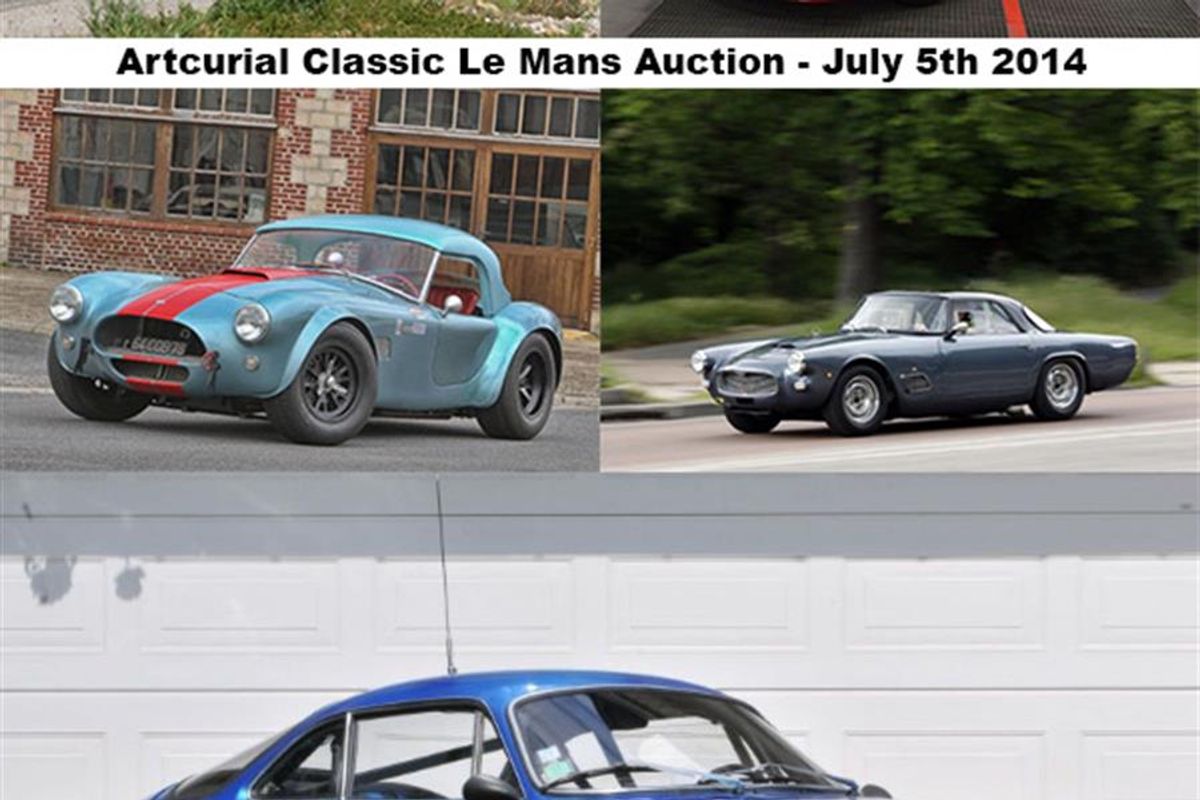 Some tantalising lots - especially if you are into air-cooled Porsche - this RS - 1 of the first 500 should generate some interest..

There is also 993 RS Clubsport estimated at a somewhat reasonable 150-180k!

Pick of auction for us?

- SALE 5 JULY 2014 - 1959 DB Panhard HBR5 "Vitrine" coupé - competed in 1959, 1960, 1961 Le Mans 24 Hours Artcurial Motorcars returns to Le Mans Classicto hold the official auction of collectors’ cars, for the third consecutive time. This year’s line-up features a mouthwatering selection of over 100 sports and competition cars, starring many that are new to the market – a trademark feature of Artcurial Motorcars’ auctions. Another distinctive feature of these sales is to offer rare models and marques, and the Classic Le Mans auction will not disappoint, with some 25 different marques entered, including some unique models. Following the huge success of the Solo Alfa sale at Retromobile in February 2014, there will be a superb choice of Italian cars and a special Solo Lancia section, that includes 11 cars from a Lancia dealer from Perugia, Italy, featuring a B24 Convertible and a Flaminia Supersport Zagato. Other collections in the sale include a group of Alfa Romeos from the Telecommunications museum in Milan, a collection of Jaguars belonging to a French enthusiast and a collection of six rare Porsche 993 models. Managing Director of Artcurial Motorcars, Matthieu Lamoure, said: "Le Mans Classic is a major international event that pays tribute to the most famous motor race in the world. In keeping with this, our sale will offer all types of competition and grand touring automobiles coming from several private collections. In the current strong and dynamic market, we have a wide selection of cars on offer, from the AC Cobra that returns to Le Mans 50 years after it crossed the finish line of the Le Mans 24 Hours in 1964 to Porsche and Lancia collections. 114 automobiles appealing to all tastes!"

Details of some of the early consignments to the sale including the 1961 Mercedes-Benz 300 SL Roadster with hardtop (estimate €1,100,000 – 1,200,000) and the 1964 AC Cobra 289 that competed at Le Mans 50 years ago, finishing 18th overall in the 1964 24 Hour race, are available on a separate press release. In addition to the Cobra, there are three other entries with Le Mans history, and a host of other machines with prestigious racing provenance. One of these is the highly distinctive 1959 DB Panhard HBR5 competition coupé “Vitrine” (estimate €120,000 – 160,000, with no reserve) that competed in the Le Mans 24 Hours three times in 1959 – 1961, finishing 19th overall in 1960 and 21st in 1961. The car was restored to its Le Mans “Vitrine” configuration some years ago, and won best restoration in 2008 on the Paris-Deauville Rally. Another rare car that has been raced on both sides of the Atlantic in period is the 1954 Tank Deutsch & Bonnet Renault HDR (€180,000 – 280,000). The car has been maintained in remarkably original condition and competed in this year’s inaugural Grand Prix de Lyon, and would be eligible for Classic Le Mans and the Mille Miglia.

Another competition car is the 1972 Ferrari 365 GTB/4 Daytona, Group 4 Transformation (estimate €800,000 – 1,000,000), which is the only known Daytona to have period racing history inAsia, having competed in Singapore for many years before being re-built to Group 4 specifications in the early 1990s. Having only been used for racing, the car has a recorded mileage of just 19,500miles

There will be an interesting collection of Alfa Romeos coming from the Telecommunications museum in Milan. This includes the 1956 Alfa Romeo Giulietta Veloce “Sebring” barchetta (estimate €250,000 – 300,000) that competed in the 1956 Mille Miglia, driven by Consalvo Sanesi. Only some 20 examples of this stunning “single seater” were built, with barchetta body and wraparound windscreen. Most of these went to America, but this example has always remained in Europe. The car was completely rebuilt during the 1980s to its original configuration. Also from the same collection is a 1968 Alfa Romeo 1750 GTAm (estimate €240,000 – 300,000) that was restored in the 1980s and remains in superb condition.

About Artcurial Motorcars – Artcurial Motorcars is the leading auctioneer for collectors’ car sales in continental Europe. Artcurial Motorcars celebrates its fourth anniversary in 2014, having achieved exceptional results and record prices for many motor cars. The most recent sale, at Retromobile in Paris, this year, realised close to €30-million, with a 85% sale rate, and broke the record, set the previous year by Artcurial Motorcars, for the biggest collectors’ car sale ever held in France. About Artcurial – Founded in 2002, Artcurial confirmed its position as the leading French auction house in 2013 with 123 sales organised across 20 specialist departments. In 2013 the auction house achieved an overall sales total of 178.1-million euros, representing an increase of 24% on 2012, and notably achieved the third highest auction price of the year in France with the sculpture La Rivière, by Aristide Maillol, that sold for over 6.1-million euros. It has also confirmed its position as market leader for Comic Strips in Europe, Collectors’ Cars in continental Europe, jewellery and watches in France and Monaco and Old Master Paintings in Paris. In 2014 Artcurial has continued its development and strengthened 20th Century fields with the new Photography, Limited Editions and Tribal Art departments. With a strong international bias, Artcurial maintains its presence abroad with offices in Milan, Brussels and  Beijing, and travelling exhibitions in the United States and Asia. Sale : Saturday 5 July 2014 Automobilia at 11.00 Motor cars at 14.00 Viewing : Friday 4 and Saturday 5 July 2014