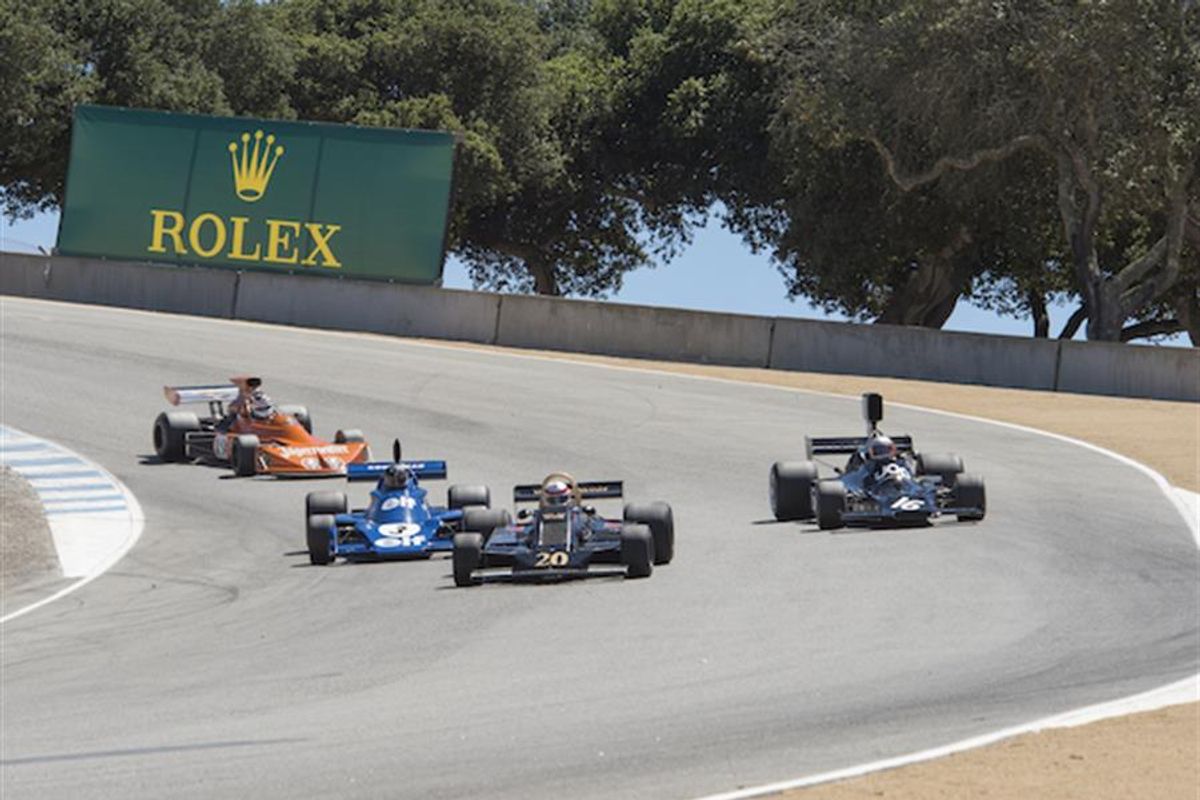 A stunning 35-car grid will grace Mazda Raceway Laguna Seca this August when Masters USA unleashes one of the biggest grids ever seen of historic Formula One cars in North America.A provisional entry list for the Rolex Monterey Motorsports Reunion, taking place on 13-16 August, has already attracted a massive entry, with competitors from Europe joining the North American series regulars. The Rolex Monterey Motorsports Reunion is the largest event held during the famed Monterey Classic Car Week with cars only being accepted on the basis of the car’s authenticity, race provenance and period correctness.Among the star cars on the grid is Chris Locke’s ex-Mario Andretti Lotus 77, the car that Mario raced in 1976, Charles Nearburg’s ex-Alan Jones Williams FW07B in which Jones finished third in Brazil in 1980 and Tom Minnich in his Arrows 001, the first chassis produced for the 1978 season and raced by Riccardo Patrese. Against the Arrows comes the Shadow DN9 of Charles Warner, his ex-Elio de Angelis/Jan Lammers car from the 1979 season.The earlier Shadow DN1 of Keith Frieser is an ex-Jackie Oliver and Brian Redman chassis and squares up against the Tyrrell 002 of John Delane with which Francois Cevert won the 1971 US GP at Watkins Glen. John Goodman is also Tyrrell-mounted as he will drive the 008 that Patrick Depailler guided to victory at Monaco in 1978.In an entry full of variety – and histories – Cal Meeker’s Williams FW08 comes from the 1983 season, Andrew Beaumont drives his ex-Ronnie Peterson Lotus 76/1 and Robert Blain has the March 751 that Vittorio Brambilla guided to victory in the 1975 Austrian GP. The rare Hill GH1, as raced by Graham Hill and Tony Brise, is in the hands of Brad Hoyt. Other significant cars include Erich Joiner’s Williams FW08C that Keke Rosberg used to score a superb win in the 1983 Monaco Grand Prix, Doug Lawson’s Wolf WR4 and Robert Kauffman in the ex-James Hunt 1977 McLaren M26 that won that year’s Japanese GP. Sean Allen drives the rare McLaren M30, as raced in period by Alain Prost, and Brian Blain pilots the ex-Teddy Pilette BRM P207, the last F1 car built by BRM.Add in Chris McAllister’s Ferrari 312T, European visitors Greg Thornton and Tommy Dreelan in their March 761s and four-times 500cc World Motorcycle champion Eddie Lawson in his Wolf WR4 and there will be some spectacular racing.“We are thrilled to host some of the most famous F1 cars of their era at this year’s Rolex Monterey Motorsports Reunion,” said Gill Campbell, CEO/general manager of Mazda Raceway Laguna Seca. “We run F1 every other year, but this year thanks to Masters Historic Racing, we will see the largest grid, and many of whom are new entrants who will experience Monterey for the first time.”Shelly Shafer Cates, Masters Historic Racing US Event Manager, is delighted with the size of the entry. “We are amazed by the entry for our Laguna Seca races and it is great to see such a variety of cars coming back out to race. We have European visitors, some of whom have a car based over here as well, and the enthusiasm showed by our local drivers is really encouraging because they are helping to make Masters USA the place to race. We can guarantee fans some fantastic cars and some great racing at all six of our Masters USA events.”