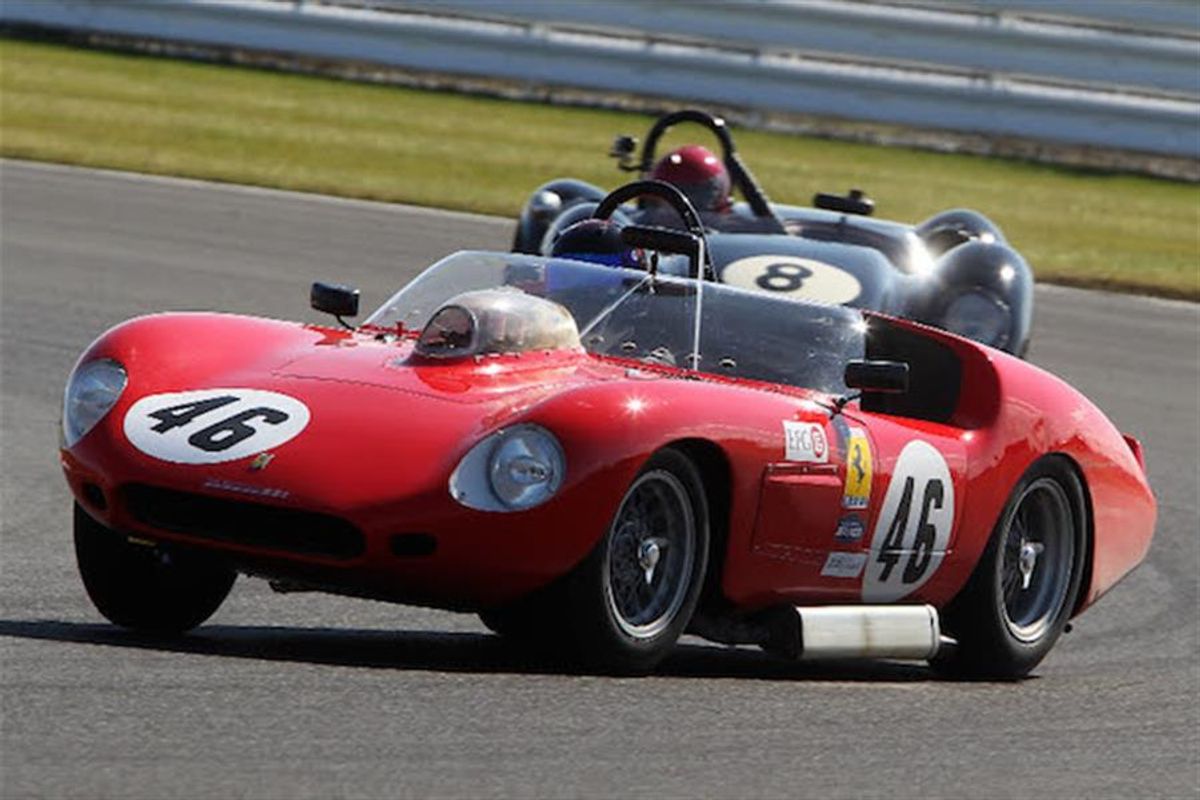 International Trophy for Classic GT Cars (Pre ’66) Martin O’Connell proved that 50 minutes of flat-out racing had not wearied him by making it back-to-back triumphs in this terrific hour-long encounter after overcoming a brace of fierce rivals. Following a brief spell at the front for pole-sitter Matt Neal in the Sunbeam Le Mans Tiger, Michael Gans moved to the head of the field in his AC Cobra, initially pulling away – until O’Connell in his Jaguar E-type and Mike Whitaker’s TVR Griffith began to home in, the former from all the way down in 25th on the grid. By lap five, it was three for the lead and what ensued was a superb spectacle as Gans used all of the Cobra’s straight-line speed to gamely defend from his marauding adversaries.  The trio ran side-by-side as they weaved their way spiritedly through the backmarkers and even past a spinner immediately across their bows. Gans’ phenomenal defensive effort under intense pressure only came to an end when he hung the tail out once too often and a tank-slapper on the exit of Copse on lap 11 finally released O’Connell. Whilst Gans’ team-mate Andy Wolfe briefly threatened to redress the balance once the pit-stops had been completed as hunter turned hunted, O’Connell was up to the challenge and responded in fine style. Whitaker wound up a distant third, just two seconds ahead of Sean McInerney’s TVR Griffith, which stormed through from 54th on the grid and even had time to serve a stop-go penalty along the way!  1) Martin O’Connell (Jaguar E-type): 25 Laps 2) Michael Gans / Andy Wolfe (AC Cobra): +12.508 3) Mike Whitaker (TVR Griffith): +41.026Group C Christophe d’Ansembourg and Bob Berridge waged a no-holds-barred early battle in the final race of the day, as the iconic Group C cars brought some Le Mans fever to Silverstone by racing evocatively into the twilight. The 1991 Silk Cut Jaguar XJR14 and 1992 Nissan R90 exchanged places on several occasions in a captivating duel, before the Belgian pulled clear. Pole-sitter Steve Tandy in a 1990 Spice SE90 GTP finished third. 1) Christophe d’Ansembourg (Jaguar XJR14): 14 Laps 2) Bob Berridge (Nissan R90): +15.868 3) Steve Tandy (Spice SE90 GTP): +28.065

A further thrilling nine races are scheduled for Sunday, along with a number of parades and family entertainment, as the 25th edition of the Silverstone Classic is brought to a close.