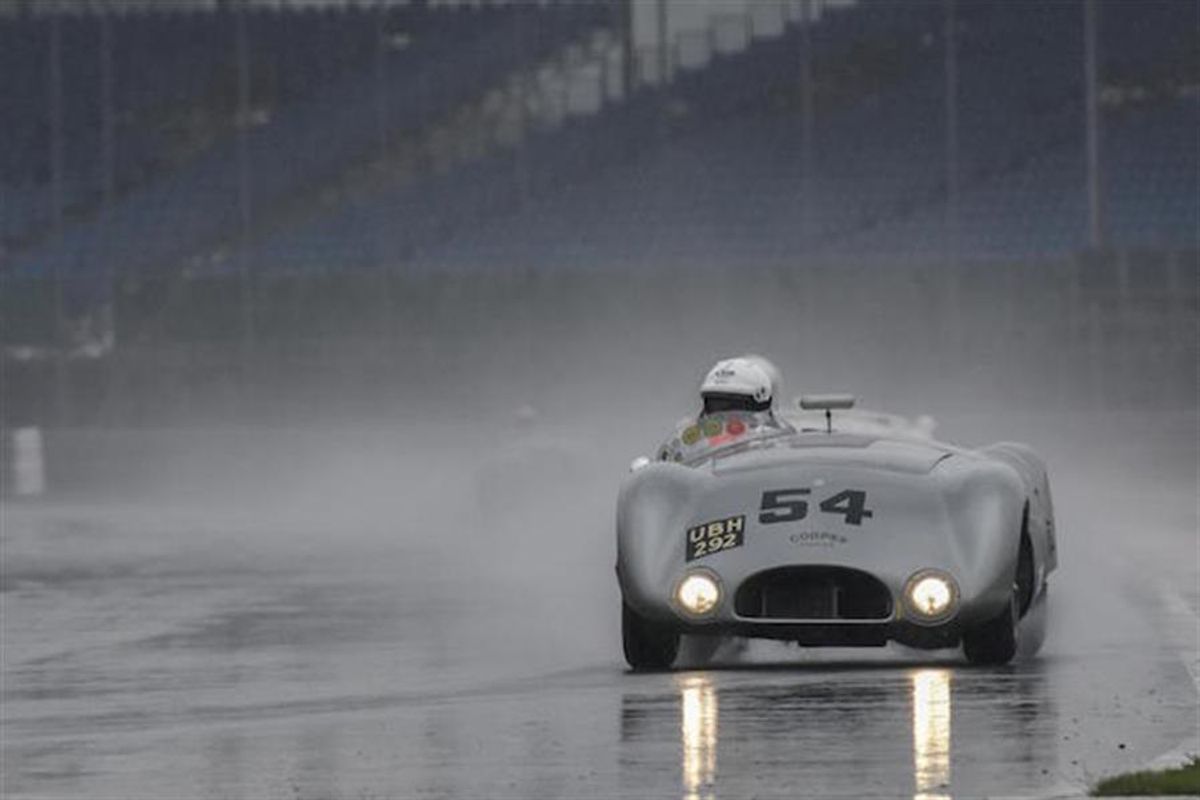 The hugely successful JD Classics Competition Department rose to the challenge of a wet and fiercely competitive Silverstone Classic with one overall win for the team’s iconic ex-Fangio C-Type, two class wins, a podium finish and a pole position.

It was during the Woodcote Trophy that the team really shone, with the ex-Fangio C-Type and Cooper T33 both competing. Qualifying was on Friday in tricky waterlogged conditions but in-house racing driver Chris Ward and John Young secured an excellent second place grid position in the C-Type, while the Cooper T33, driven by JD Classics MD Derek Hood and Chris Ward, followed just behind in third.

By the time the race rolled around on Sunday, the rain was back again but the racing was as fierce as ever. Following a rolling start, the C-Type jostled for position, holding strong in second place as the weather got even worse. The Cooper T33 started brilliantly, with Chris Ward driving it in to the lead by the second corner before a suspected oil leak forced it into the pit. JD Classics’ expert engineers quickly solved the problem but the Cooper had been issued with a stop-and-go penalty for speeding in the pit lane, and following a driver change it was sitting in the middle of the field.

Meanwhile, the C-Type continued to challenge at the very front, expertly driven in some of the trickiest conditions of the weekend. A dominant race by John Young and Chris Ward kept competitors at bay to secure an impressive victory for the ex-Fangio C-Type. The Cooper T33, meanwhile, came home in the top half of the 42-car field despite its setbacks.

The action in the Stirling Moss Trophy kicked off with a wet and windy qualifying session, in which JD Classics was competing with a D-Type driven by the team’s in-house racing driver, Chris Ward and teammate Andrew Smith. As the 30-minute session drew to a close the drizzle turned to a downpour but the D-Type was still putting in some incredible lap times, eventually taking pole position a full three seconds ahead of its nearest rival.

The Stirling Moss Trophy race got underway on Saturday morning, with the dry, sunny conditions a world away from Friday’s weather. As the cars launched off the line at the start it was clear that the dry track favoured the more powerful cars in the pack, and the pole-sitting D-Type of JD Classics began to fall back through the grid. Following a mandatory pitstop and a driver change, the D-Type made its way up the field again, passing cars with far more power to cross the line with an impressive eighth-place finish and a class win.

Qualifying for the Super Touring Car Challenge was disregarded because conditions were too dangerous, with all the cars lining up for the race in order of their previous race finishes. That put the JD Classics Bastos Rover, Ford Cologne Capri and Group 44 Jaguar XJS in the middle of the pack.

The race itself was marred by unfortunate technical mishaps for the team’s normally dominant Bastos Rover and Ford Cologne Capri. The Rover suffered an axle failure, which the team put down to its tough weekend of demonstrations at the Goodwood Festival of Speed. Meanwhile it was a faulty clutch that forced the Cologne Capri out of the race. Nevertheless, the Group 44 XJS did the team proud, overtaking far more modern cars to claim eighth place and a class victory.

In the newly created Jet Battle of Britain Trophy race, the JD Classics lightweight E-Type ‘1196 WK’ started sixth – again following a disregarded qualifying session because of bad weather. Historic racing legend Steve Soper piloted the E-Type past some of the best British racing cars of the ‘60s to cross the finish line in third place.

JD Classics Managing Director Derek Hood said: “The conditions at Silverstone Classic this weekend were some of the worst we’ve raced in but our drivers and engineers in the Competition Department really did us proud.

“Another victory for the ex-Fangio C-Type just serves to cement that car’s reputation as one of the best historic racing cars in the world, and we’re proud to bring home two more class victories and a podium finish from what has been a hugely successful weekend of racing for us.”