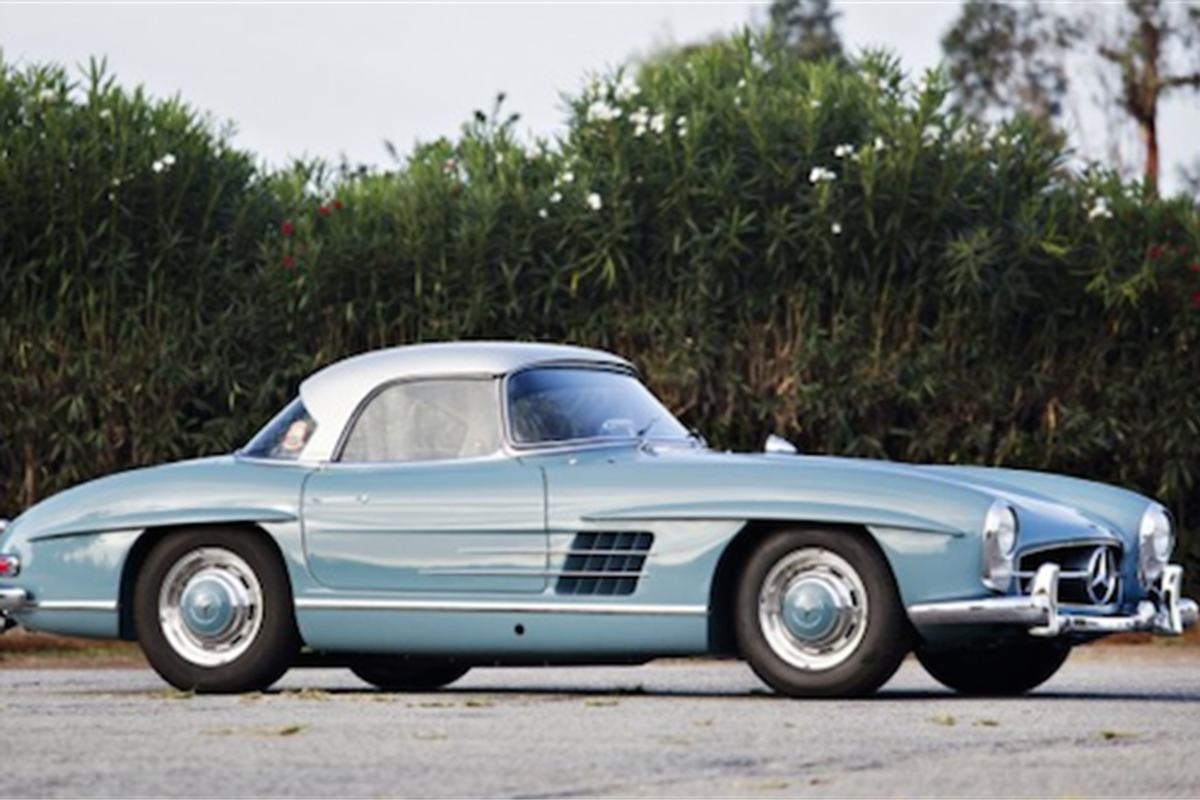 THIS CARWith DNA rooted in the 300 SL racing cars of 1952, which successfully returned Mercedes-Benz to top-level international competition and scored a commanding 1-2 finish at Le Mans that year, the breathtaking 300 SL Coupe debuted at the 1954 New York Auto Show to widespread acclaim. Demand for a roadster variant spurred development shortly after Gullwing production began, with German magazine Auto Motor und Sport reporting the first sighting of a modified open 300 SL at Stuttgart in 1956. While 300 SL Gullwing production wound down in mid-1957, with 1,400 built in all, production of the comprehensively refined 300 SL Roadster commenced. Just 1,858 300 SL Roadsters were constructed through 1963, with the model largely hand-built.

The process of creating an open 300 SL was quite complex, with the roadsters being extensively re-engineered compared with their closed predecessor. Handling was improved with rear-suspension upgrades and standard Michelin X tires. Compensating for the 300 SL Roadster’s additional weight, its three-liter engine received a competition camshaft and increased compression.

Predictably, the roadsters were quite popular among the top celebrities of the era, further raising the 300 SL’s image. Despite costing more than $11,000 when new, the low-production 300 SL Roadster was never among the most profitable models for Mercedes-Benz. But the influence and halo effect that the cars had when new are stronger than ever today – no serious collection of the world’s great sports cars is considered truly complete without at least one high-quality example in residence.

According to a copy of the Mercedes-Benz data card, this US-specification 300 SL Roadster was originally finished in the rare and striking color scheme of Hellblau (medium blue, code DB 334) with blue leather upholstery. Gull Wing Group club records indicate that the first known owner of the SL Roadster was Siegfried “Sigi” Benzel of Fort Lee, New Jersey. A German immigrant who built one of New Jersey’s most successful chains of automobile dealerships, Mr. Benzel was a passionate collector of classic Ferrari and Mercedes-Benz sports cars.

After some time in Mr. Benzel’s hands, the Mercedes-Benz was sold to John Hwang, a resident of Garden City, New York. During Mr. Hwang’s ownership, the 300 SL attracted the attention of Liong Liem, an enthusiast living in Fairfield, Connecticut. After pursuing the 300 SL for nearly a decade, Mr. Liem was finally able to negotiate a purchase with Mr. Hwang in 1973.

Early in his ownership, Mr. Liem entered the 300 SL in Mercedes-Benz Club of America events held at Pocono and Lime Rock, including time trials, quarter-mile races, gymkhanas, and concours d’elegance. A testament to the car’s inherent durability, it was driven more than 100,000 miles before Mr. Liem commissioned noted marque specialist Robert Platz of Precision Autoworks of East Camden, New Jersey, to perform a comprehensive restoration.

As evidenced by a copious file of records, this 300 SL Roadster was restored between 1986 and 1992. During this process the bodywork was refinished in the original Hellblau livery, the interior was re-trimmed in the correct blue leather, the brightwork was replated, and mechanical components – including the fuel-injection, radiator, oil cooler, and fuel system – were restored or rebuilt.

Since the restoration was completed, the 300 SL Roadster has been driven minimally and maintained as needed by James Garttmeyer Automotive Services of Wayne, Pennsylvania, and, more recently, Vintage MotorSports Inc. of Malvern, Pennsylvania.

Presented in its stunning original color combination, this sophisticated 300 SL is equipped with the most desirable accessories available for the model – an optional factory hardtop, Nardi wood-rim steering wheel, and a Becker Mexico radio. Significantly, a copy of the Mercedes-Benz data card confirms that the chassis, engine, and body numbers found on the car match the factory records and, furthermore, a large file of restoration and service invoices is offered with the sale.

Well-documented and professionally restored by a marque expert, this 300 SL Roadster is an ideal candidate for leading automotive events – from Gull Wing Group and Mercedes-Benz Club of America concours events to exclusive rallies such as the Colorado Grand. For the collector in search of a visually distinctive and beautifully presented Mercedes-Benz sports car, a closer look is strongly encouraged.