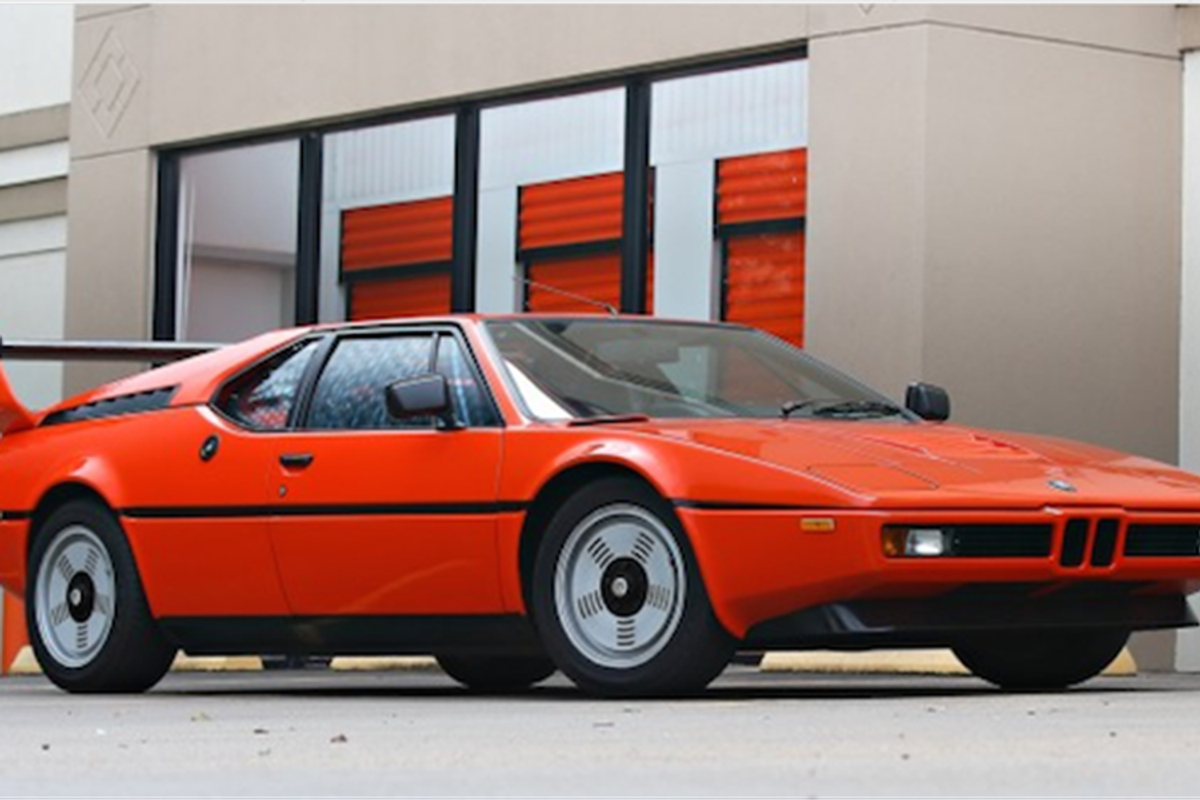 THIS CARThe first car unveiled by the independent BMW Motorsport division, the M1 represented a radical departure for the famed Bavarian marque. The mid-engine BMW supercar was developed in cooperation with Lamborghini, designed by influential Italian stylist Giorgetto Giugiaro, and constructed by Karosserie Baur in Stuttgart. The M1 was an extremely capable and well-rounded sports car that featured a Marchese-built tube-frame chassis, lightweight GRP bodywork, ventilated disc brakes, Campagnolo wheels, a 5-speed ZF transaxle, and fully independent suspension as well as luxury amenities, such as air-conditioning and power windows.

At the heart of the state-of-the-art supercar was BMW’s magnificent M88 engine. With chain-driven camshafts, four valves per cylinder, dry-sump lubrication, steel-tube headers, and advanced Bosch Kugelfischer-timed mechanical fuel injection, the M88 engine developed 277 bhp in street trim – a healthy figure for a car weighing less than 2,900 lbs. Capable of accelerating from 0 to 60 mph in 5.6 seconds and boasting a top speed in excess of 160 mph, the M1 was one of the fastest production sports cars of its era.

According to factory production records, this stunning Inka Orange M1, chassis no. WBS4301006, was the third example constructed by BMW Motorsports and the first production car delivered to a dealership in Germany. After being used as a training car at BMW service centers, it was sold to Alf Gebhardt, a Tulsa, Oklahoma-based BMW racer. Gebhardt had been successfully competing since 1978 in a CSL and M1 Procar, and his close working relationship with the manufacturer enabled him to bring his new M1 into the US without it being subjected to the normal federalizing modifications. During his ownership, Gebhardt added an authentic Procar wing to the BMW and used the M1 as an occasional driver before selling it in 1986 with approximately 6,000 km showing on the odometer.

The new custodian of the M1, Martin Ryba of McHenry, Illinois, retained the BMW for nearly three decades, recording just 15,000 additional kilometers during his exacting stewardship. Throughout Mr. Ryba’s ownership, the same BMW Master Technician maintained the M1, the last 20 years being at The Werk Shop in Libertyville, Illinois. While being readied for sale, the M1 was inspected and serviced by The Werk Shop, who, according to the consignor, performed compression and leak-down tests showing uniform results for all cylinders.

An outstanding, early production BMW M1, this example possesses a lovely patina on original finishes and retains its unused first-aid kit and factory tool roll. Finished in the desirable Inka Orange livery and boasting an impressive three-owner provenance that begins with famed BMW racing driver Alf Gebhardt, this low-mileage German supercar stands ready to provide years of additional enjoyment to its new owner.To keep up-to-date with all the news from the London Classic Car Show visit the dedicated website – www.thelondonclassiccarshow.co.uk – or go to the show’s interactive Facebook page. Just search ‘London Classic Car Show’ from your own page and 2016 show news and 2015 highlights are there to be enjoyed.