The Beast is back! 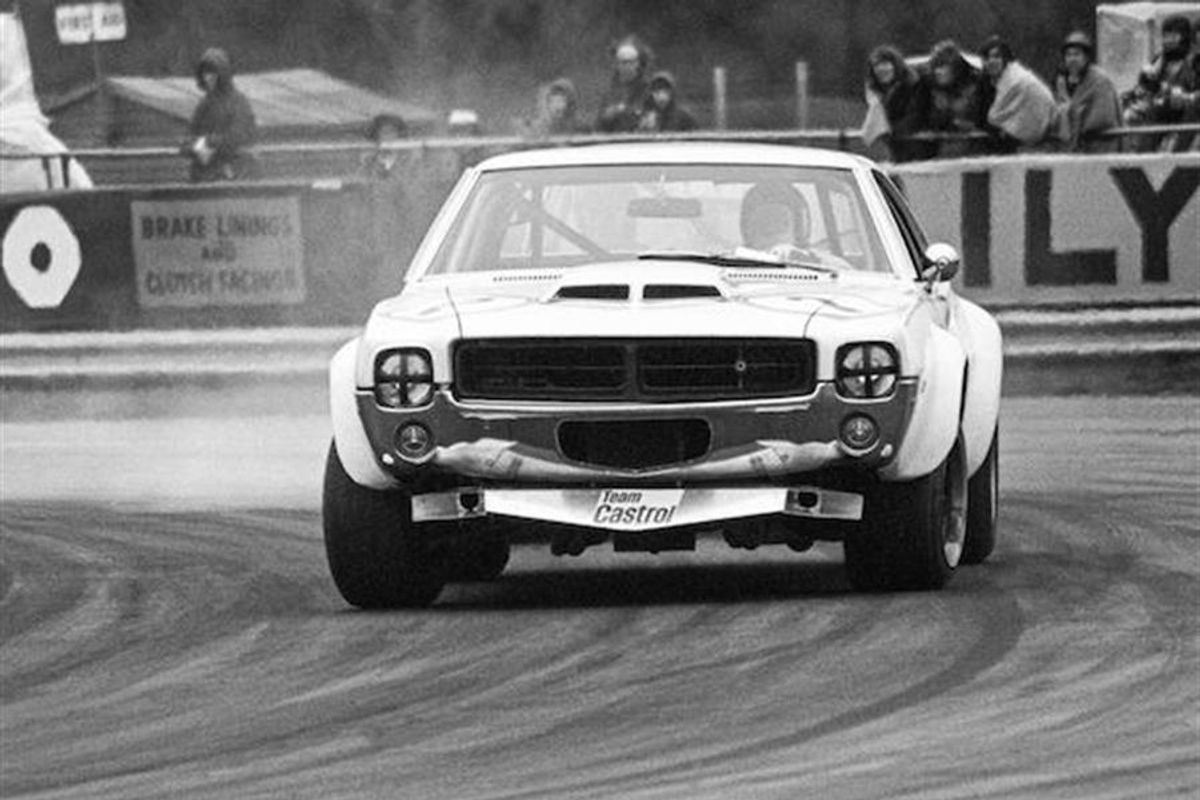 40 years on, the mighty AMC Javelin is ready to roar again    Return of the iconic US muscle car from the seventies    Another great addition to sparkling Tin Top Sunday line-up   After an absence of more than 40 years, the mighty muscle car once known as ‘The Beast’ is ready to make a thunderous racing return at this summer’s Silverstone Classic (29-31 July).Back in the early seventies, the awesome 6.4-litre AMC Javelin was a real crowd favourite when competing in the British Saloon Car Championship (as the BTCC was known then) and Special Saloons series. But then, after an impressive victory at Silverstone in August 1975, its intrepid owner/driver David Howes suffered a badly broken leg in a road accident and, as a result, ‘The Beast’ has never again turned a wheel in anger.For the following four decades, the brutish Javelin remained spotless, sparkling and silent under wraps in Howes’ garage and was even declared as ‘lost’ or ‘missing’ on internet forums. It was, however, only biding its time until the moment Howes could let go, and that hour finally arrived at the end of 2015.The iconic and intriguing car’s new owner is well-known historic car collector and racer Marc Devis, and the Belgian fanatic is thrilled at the prospect of bringing the much-loved ‘big-banger’ back to life at next month’s Classic.     “I have something of a reputation for special projects like this, and the fact the Javelin had been sitting with the same owner since the seventies – and had lots of great period history ­– certainly appealed to me,” enthused Devis.“We collected the car together with a huge number of spares, original parts and documents,” he continued. “Having been laid up for so long, both the engine and mechanicals were in need of a full rebuild and overhaul, but I was adamant those now overseeing the project at WDK Motorsport were sympathetic and didn’t do anything to change the appearance of the original car – it must look exactly like it did before being parked in the garage in the mid-seventies.“I’m pleased to report that even though it has been tricky to track down some of the AMC engine parts from the States, it’s all coming together now and our fingers are firmly crossed for the Classic. The plan is to get David Howes back to Silverstone next month and reunite him with the car – that would be really special.”The phenomenal Javelin will also be reunited with some of its old adversaries when Devis takes to the track for the packed Historic Touring Car Challenge race on Tin-Top Sunday. Several Capris and BMWs from the same glorious era are similarly among the 50+ grid for what promises to be one of the weekend’s many, many highlights. It’s a 40-minute, two-driver, pit-stop race and Devis will be sharing the amazing Javelin’s hot-seat with former Formula Palmer Audi single-seater champion Jonathan Kennard. Together they will be rolling back the years and stirring up many memories.Introduced in the late sixties, the two-door Javelin was AMC’s challenger in the US ‘ponycar’ sector as epitomised by the rival Mustangs and Camaros. This particular model was originally imported into the United Kingdom as a road car by John Burke, a US serviceman posted to these shores.Seeing the huge success being enjoyed by big-engined American muscle cars in saloon car racing, experienced tin-top racer Howes bought the Javelin from Burke in early 1971 and set about rebuilding it to the Group 2 specifications then required to race in the premier British and European Championships. He spent the next 12 months painting it white (from its original yellow), fitting a bigger 6.4-litre engine plus a manual competition gearbox, adding racing suspension and making all the other upgrades needed to go racing.Although perhaps lacking the development to challenge for outright BSCC victories, Howes did notch up several top ten finishes and win two Special Saloons races at Silverstone in 1972 – enough, it seems, to secure some factory support direct from American Motors in Detroit for the following season.Reflecting this official backing, the Javelin reappeared in 1973 resplendent in AMC’s renowned red, white and blue racing livery as made famous by drivers such as George Follmer and Mark Donohue when lifting Trans-Am titles on the far side of the Atlantic. While always a stand-out favourite with the fans, results were mixed; a second place in the British Grand Prix support race to Frank Gardner’s Camaro was probably the highlight.With the BSCC regulations replacing Group 2 with a new breed of less powerful Group 1 cars for 1974, Howes and the unique Javelin were thereafter somewhat restricted to limited appearances in various Special Saloons series before David’s unfortunate road accident in summer 1975.Now, though, The Beast is sharpening its claws and getting ready to roar once again. The revival of such an esteemed seventies icon is certain to add yet more high-octane excitement to Tin Top Sunday at the Silverstone Classic.Adult admission for Tin Top Sunday is priced at £54, with £6 admission for accompanied children aged between six and 16 years old. A wide range of weekend, camping, VIP hospitality and Family Tickets – all of which must be purchased in advance – are also available. Adding to the festival’s immense appeal, tickets include free entrance to both racing paddocks and pit complexes, trackside grandstands and live music concerts on Friday and Saturday evenings. Full details can be found on the official www.silverstoneclassic.com website.