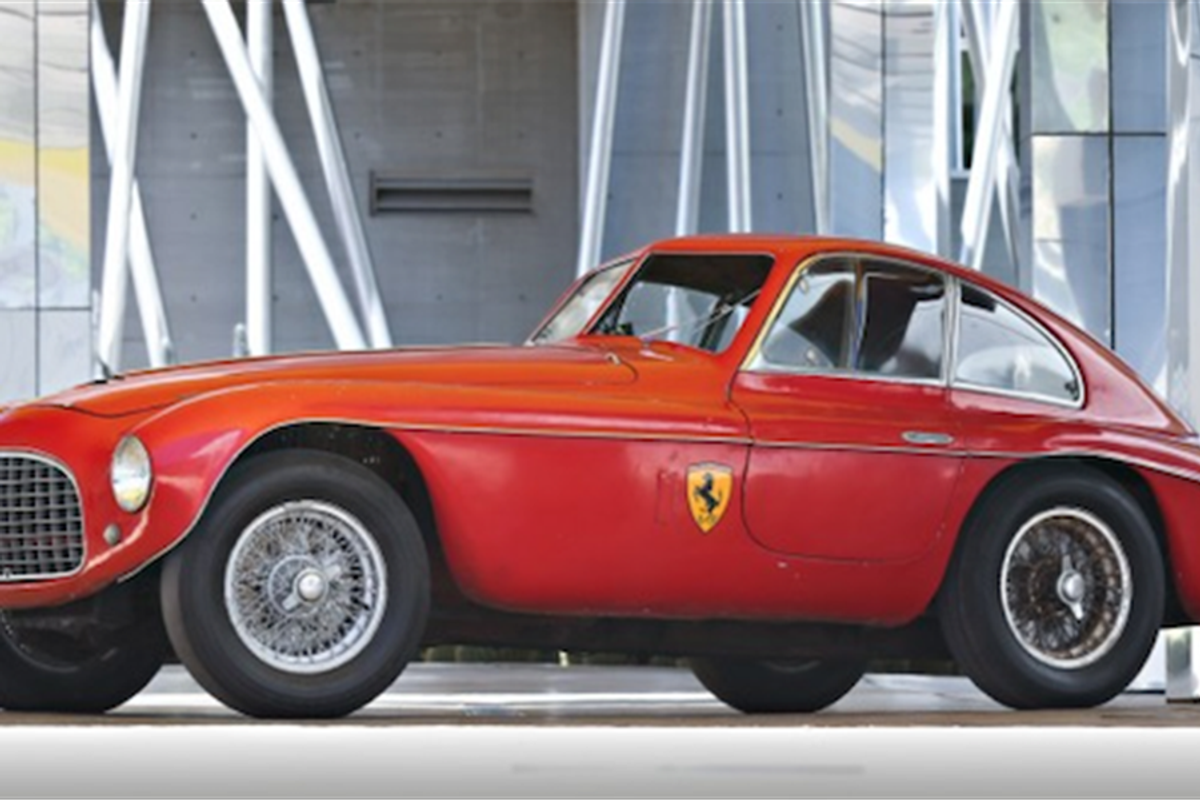 Historically Important, Even-Serial-Number Competition FerrariDriven by Nuccio Bertone at the Mille Miglia in 1950 and 19511952 2-Liter Italian Sports Car Champion with Emilio GilettiOriginal Touring Barchetta Coachwork Updated by Zagato in 1953A Rare Opportunity to Acquire One of the Last Great Unrestored Ferraris

THIS CARIt was the Tipo 166, introduced in 1948 as a replacement for the 125 S, that first established Enzo Ferrari’s Modenese workshop as a leading manufacturer of racing cars. Powered by a two-liter Colombo-designed V-12 engine, the 166 set forward a course of development that would define the look, sound, and inimitable character of Ferrari automobiles.

While the earliest 166 Sports and Spider Corsas were successful in their own right, it was the 166 Mille Miglia – or MM – that dominated sports car racing in the late 1940s and early 1950s. In fact, the Ferrari 166 MM is the only postwar model to win all three of the great European sports car races: the 24 Hours of Le Mans, the Targa Florio, and the Mille Miglia.

During these early days, Carrozzeria Touring, based in Milan and headed by Carlo Felice Bianchi Anderloni, was the coachbuilder most closely associated with the Ferrari marque. Touring’s exquisite designs and technically advanced Superleggera construction were ideally suited to the sporting qualities of the 166 MM chassis. The now iconic 166 MM Barchetta, or little boat, was the happy result of this collaboration between Ferrari and Touring.

The Ferrari 166 MM presented here, 0046 M, was completed in April 1950, making it the 18th of 25 Barchettas built by Carrozzeria Touring. Carrying body no. 3447, this particular Barchetta was purpose-built for competition use, finished in Italian racing red with the more spartan “nude” interior, rather than the more luxurious Lusso treatment.

The Barchetta made its racing debut at the Mille Miglia, held on April 23, 1950. For this all-important race, Scuderia Ferrari loaned 0046 M to a young Giuseppe “Nuccio” Bertone (son of the prominent Torino coachbuilder) and his co-driver, Luigi Casalegno, who piloted the new Ferrari to an impressive 14th Overall, 3rd in Class finish. Three months later, Bertone drove the 166 MM at the Coppa d’Oro delle Dolomiti, and the car then returned to the Ferrari factory, where it received an upgraded three-carburetor arrangement and a revised rear-axle ratio. At this time, the bodywork was also suitably updated, receiving two horizontal slots in the hood and fog lights faired in on either side of the grille.

In April 1951, the updated Barchetta returned to the Mille Miglia, where it was again entrusted to Nuccio Bertone. Unlike the previous year, Bertone and his co-driver failed to finish the 1,000-mile race, and the Barchetta once again returned to Ferrari for the latest updates. As documented on the factory build sheets for 0046 M, the engine was updated prior to the 1952 racing season with type 225/16658 cylinder heads, which, combined with the three Weber carburetors, greatly improved the car’s performance.

In June 1952, Ferrari finally sold 0046 M to Nuccio Bertone, who in turn sold it to fellow Torino resident Emilio Giletti. Giletti raced the car with incredible success throughout the 1952 season, capturing many podium finishes, several class wins, and even an outright victory at Il Trofeo Sardo. Giletti often shared his Barchetta with co-driver Walter Loro-Piana, presumably a member of the famous Italian textile family.

Due to his impressive performance in 0046 M, Giletti became the Italian Sports Car Champion in the two-liter class for 1952 and was even featured in Ferrari’s annual yearbook.

In January 1953, Giletti sold the 166 MM Barchetta to Luigi Bosisio, a Milanese gentleman driver who had begun racing only the year before with his Lancia Aurelia GT. Bosisio, then just 28 years old, had signed up with Scuderia Sant’Ambroeus, a new racing team founded in Milan, and bought the championship-winning Ferrari to campaign in the upcoming season.

Despite having just purchased a Barchetta, Bosisio really preferred racing a closed car, and so Elio Zagato, a founding member of Scuderia Sant’Ambroeus, advised him that his father could transform the car into a berlinetta before the season’s first race.

Soon after 0046 M arrived at Carrozzeria Zagato, the Barchetta’s nose was simplified and modernized by eliminating the distinctive “omega” form, which begins at the base of the headlights and frames the upper part of the eggcrate grille. From there, a lightweight aluminum roof section was fabricated in the aerodynamically effective teardrop shape that Zagato had pioneered with Ovidio Capelli’s Fiat 8V just a few months earlier. The tall, curved side windows were constructed in Zagato’s famous “panoramico” style, while the rear window incorporated a large external fuel filler. Despite these changes, Zagato’s berlinetta conversion left much of the original coachwork intact, preserving the line and character of the original Touring Barchetta.

In its new form, Bosisio raced 0046 M throughout 1953, with a debut at the Mille Miglia in April. With strong results in the 166 MM, Bosisio became recognized in Italian racing circles and, in 1954, he was invited to join the Maserati works team.

In December 1953, 0046 M was sold to Bruno Martignoni of Varese. He raced the car just once – at the Casablanca 12 Hours in Morocco – and then sold it in September 1955 to Luigi Chinetti Motors, Ferrari’s North American distributor. John Sharpe, a car enthusiast from Buffalo, New York, purchased the 166 MM in early 1956, repainted it metallic blue, and campaigned it in its final races at the Watkins Glen Grand Prix in New York and the Indian Summer Trophy at Harewood Acres in Canada.

In 1957, Charles and Audrey Saffell of Huntsville, Alabama, purchased 0046 M from a used-car lot in Detroit, trading their Triumph TR2 and cash for the aging Ferrari. The Saffells were true enthusiasts; they drove the 166 MM down to Sebring for the 12 Hour race and repainted the car red to match their other Ferrari, a 250 MM Vignale Spider.

After a few years, the Saffells sold 0046 M to Maurice Blevins, who damaged the engine and replaced it with a Chevrolet small-block V-8. In 1966, the Ferrari and its original engine were sold to Darrell Westfaul, a college student attending the University of Alabama. For several years he used the Chevy-powered 166 MM as his daily transportation and then retired it to storage, where it remained for decades, virtually unknown to Ferrari collectors and historians.

Finally, in 2007, Mr. Westfaul sold the Ferrari to the current owner, an American collector with a passion for the finest coachbuilt sports and racing cars. In his ownership, the 166 MM has continued to be preserved in its wonderful, unrestored condition; even today the Borrani wire wheels wear a mix of vintage sports car tires, and Mr. Westfaul’s 1966 University of Alabama parking sticker is still affixed to the windscreen.

Over the past two years, the original engine (no. 0046 M) has been rebuilt and installed, while a correct gearbox (no. 7) and the original differential (no. 0018) accompany the sale of the car, along with many other original components. The car is also offered with important documentation, including a history report compiled by Ferrari historian Marcel Massini.

This fascinating even-serial-number Ferrari presents its new owner with several exciting options: continue to preserve the car in its current state as a true time capsule from the mid-1960s, or perform an exacting restoration – either in its period Zagato Berlinetta configuration or one that would return the car to its original Barchetta design. Whatever the future holds for this 166 MM, it is a truly significant competition Ferrari that possesses an exceptional international racing history, a fascinating, continuous provenance, and connections to Anderloni, Bertone, and Zagato – three of the most famous names in the history of Italian coachbuilding.