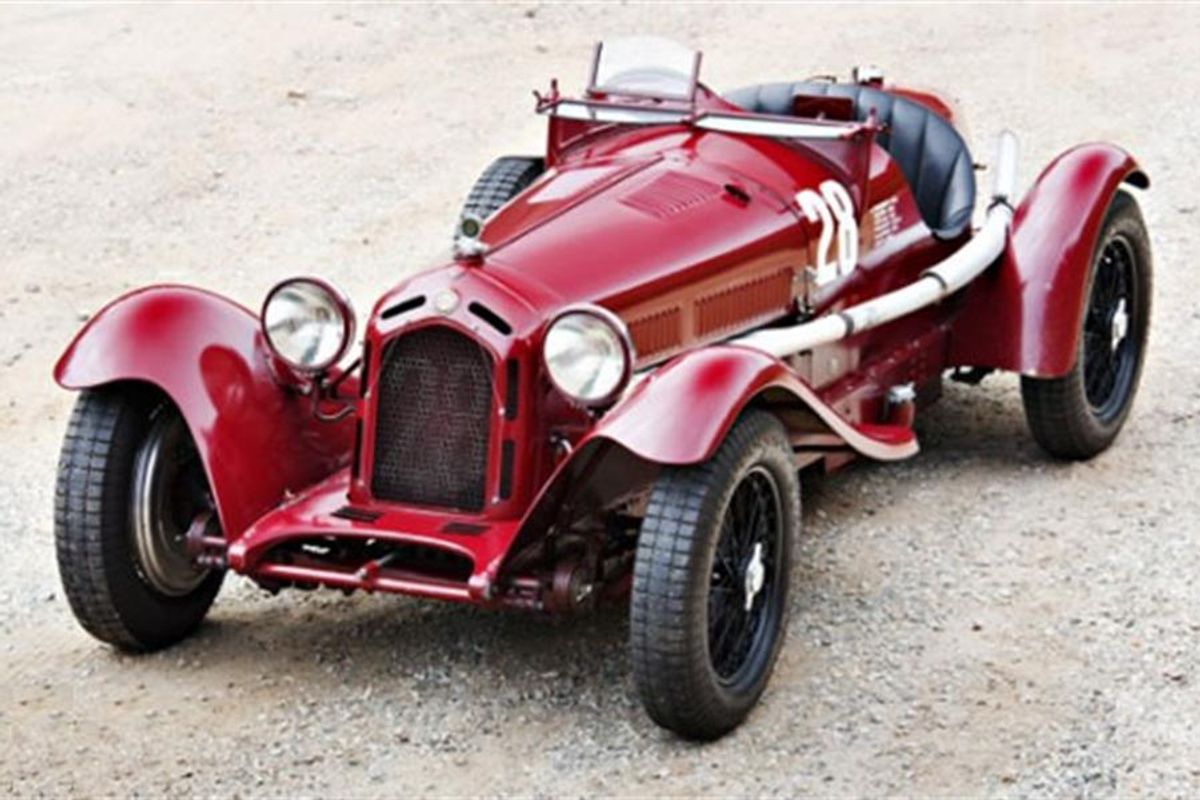 One of the most desirable and unbelievably faulous sounding cars of all time. An 83(!) year old car that even today would be great to drive on the road - this one is pretty original too.

THIS CARIntroduced in 1931, the Alfa Romeo 8C 2300 was the premier high-performance sports car of its day, designed by the great engineer Vittorio Jano and powered by a magnificent inline eight-cylinder engine with twin overhead camshafts and a gear-driven supercharger.

Constructed in three distinct series through 1934, the 8C 2300 was available in short- and long-chassis configurations. Depending on an owner’s preference, the 2.3 could serve as a luxury car, carrying ornate custom coachwork, or a thoroughbred racer, with a lightweight sporting body. In total, approximately 190 examples of the 8C 2300 were built.

The model enjoyed tremendous success at the height of international competition, and its winning record was unrivaled. During the years of its active production, the 8C 2300 captured four consecutive wins at the 24 Hours of Le Mans, three consecutive wins at both the Mille Miglia and Targa Florio, as well as back-to-back wins at the 24 Hours of Spa. The 2.3 also led Alfa Romeo to develop the legendary Monoposto Tipo B, or P3, which dominated Grand Prix racing, capturing 46 wins between 1932 and 1935.

In May 1931, relatively early in the 2.3’s history, Alfa Romeo entered a specially prepared short-chassis spider in the Italian Grand Prix at Monza; the car’s wheelbase had been shortened, the oil tank was relocated from the nose to the center of the chassis, and four Siata dampers were mounted at the rear. The most obvious change was the bodywork, which featured a slotted and cowled radiator, a prominent external exhaust pipe running the length of the car, and a pointed “torpedo” tail carrying a massive fuel tank. In the hands of Campari and Nuvolari, this modified 2.3 won the Italian Grand Prix and the new car was henceforth known as the Monza.

While the earliest Monzas were generally competition-prepared short-chassis Spiders, it became a separate model following a brief period of development. The classic Monza of the 1932-1933 era had a shorter frame than the standard short-chassis 2.3, with the tie bar dropped below the frame at the front and different cross members at the rear to support the endurance fuel tank. There were also myriad technical differences, including geared-up blowers, fast-ratio steering boxes, and special lightweight components.

Compared with the long- and short-chassis 2.3s, Alfa Romeo constructed relatively few Monzas; many were actually built by Scuderia Ferrari, who converted short-chassis Spiders and then issued the cars their own “SF” serial numbers. Nevertheless, Alfa Romeo did offer the Monza to a select group of customers who required a competitive factory-built racing car. During the early 1930s, Monzas were effectively campaigned in a variety of sports carraces, wearing full road equipment, and in their more common Grand Prix guise. Despite challenges from the Bugatti Type 51 and Maserati 8C 3000, the Monza, with its ideal balance of performance and reliability, usually prevailed.

The 8C 2300 presented here, chassis 2311218, is a genuine factory-built, third-series Monza, bodied by the Milanese coachbuilder Brianza and sold new in Italy.

According to Simon Moore’s definitive book, The Legendary 2.3, this Monza was first registered in Genova on August 10, 1933, and remained in the Ligurian region for the next 17 years. During this period, it was owned by a succession of prominent Italian racing drivers, the first being Cesare Sanguinetti, who ran at least four different 2.3s under the Corso Italia banner. In March 1934, Sanguinetti sold the car to Luigi Beccaria, a regular entrant in the Mille Miglia and president of Gruppo Automobilistici Genovese. The Monza’s first definitive competition outing took place at the Klausen Hillclimb that August, where the car’s third owner, Attilio Battilana, placed 7th in the sports car class. A photograph of 2311218 was taken later in 1934 at the famous Stelvio Hillclimb, where either Battilana or Sciutti drove it.

In June 1935, the Monza’s first owner, Cesare Sanguinetti, re-acquired it from Battilana. Although little is known of the car’s competition record during the next six years, it is believed that the 2.3 continued to race in various European events, given that Sanguinetti and all of its previous Genovese owners were active throughout this period, often sharing cars. The Monza may have also served as a thrilling road car, as early photos show it fitted with headlights, horns, a spare wheel, and wings – a thin disguise for a Grand Prix machine.

Following WWII, the Alfa Romeo returned to the racetrack in the hands of Renato Balestrero, one of the most successful Genovese drivers. By the time he acquired the Monza in 1947, Balestrero had compiled an impressive competition record, with 50 wins in a variety of cars, from Bugattis to LaSalles. Throughout 1947, Balestrero campaigned the Monza in sports car races, attaining his best results at San Remo, the Bari Grand Prix, and the Sassi Superga Hillclimb. To comply with postwar regulations, the prewar Monza was fitted with a passenger door and a spare tire precariously mounted over the exhaust pipe.

Balestrero’s excellent results in the 2.3, combined with other successful outings in a Stanguellini 2800 Sport, helped him capture the 1947 Italian Sports Car Championship in the over-1500 class as well as 10th overall in the driver’s championship. Following the brilliant 1947 racing season, the Monza was sold to Giovanni Ughetti, who drove it to a 1st in Class finish at the 1948 Catania-Etna Hillclimb, the Alfa’s final race in Italy.

In fall 1950, the Monza was shipped by boat from Naples, Italy, to Caracas, Venezuela. Robert Ford, an engineer with an American oil-field service company, discovered it there two years later. By this time, the 2.3 had been repainted white and fitted with a leather hood strap. Mr. Ford paid $1,800 for the Monza and sent it to a Trinidadian chauffeur for servicing. The car then sat for a year before it was sent to a local shop in Caracas, where it received a fresh coat of black paint and some “American-looking” chrome plating.

The Monza arrived in the US in 1954, had its engine rebuilt by former Indianapolis race mechanic Marcel Periat, and was then kept at Mr. Ford’s home in Ross, California. One of the few car enthusiasts that saw the 2.3 during Mr. Ford’s ownership was famed designer Strother MacMinn, who stumbled upon it while visiting the garage to photograph a Hispano-Suiza.

Once the restoration was completed in 1985, the Monza embarked on its third era of racing, capturing the Phil Hill Trophy at Laguna Seca along with victories at Seattle International and Palm Springs. Over the next decade, Mr. Giddings drove the car with incredible success at venues as diverse as Monterey, Portland, Westwood, Las Vegas, Australia, New Zealand, and even La Carrera Panamericana. During this period, the 8C was a consistent podium finisher and often was seen defeating newer and much more powerful competitors.

In 1996, Mr. Giddings sold the Monza to Tom Hollfelder, a collector with an appreciation for the finest Italian racing cars. During Mr. Hollfelder’s 14-year ownership, the Monza continued to participate in important events including the Mille Miglia Storica, Colorado Grand, and Monterey Historic Races, during which time it was always meticulously prepared and kept in well-sorted, race-ready condition.

Since acquiring the car in 2010, the current owner has enjoyed the Monza on the road, participating in European and US tours. Today, it remains in superb mechanical order and the well-maintained 1980s restoration possesses an inviting, consistent patina.

“On the road, the 8C 2300 is a classic example of an ‘axled’ Alfa. A continuous high-frequency dance of the hood and front fenders, which serve as a horizon of sorts for the driver, reminds one of the car’s vintage. It’s a lovely view when driving, complimented by the ever-present busy noise of things mechanical, the incessant whir of fine machinery. Best of all is the marvelous ripping exhaust note, which is quite different from that of the company’s six-cylinder engines and is one of the most cherished sounds in motoring history.”

The Alfa Romeo offered here is one of the last factory-built 8C 2300 Grand Prix cars, a third-series Monza with Brianza bodywork, finished in flat, blood red paint. With its low radiator, short wings, and body-length exhaust pipe, there is no mistaking it for anything but a classic Italian sports racing car. The engine, currently displacing nearly 2.9 liters, delivers instant acceleration, accompanied by a glorious thoroughbred soundtrack. It is a thrill to drive, on the open road or closed track, under any kind of condition.

This particular car has a wonderful racing history, pre and postwar, mostly Italian, with many good results, including a major role in Renato Balestrero’s 1947 Italian Sports Car Championship. It has a continuous, well-documented provenance, with just four owners since 1952. It has also proven reliable in numerous vintage races and long distance tours, yet remains in fundamentally original order eight decades after it was built. The Monza is well-known and highly regarded among 8C 2300 experts, who have carefully recorded its history and documented its correctly numbered components.

This Alfa Romeo Monza is, quite simply, one of the most desirable automobiles of all time.