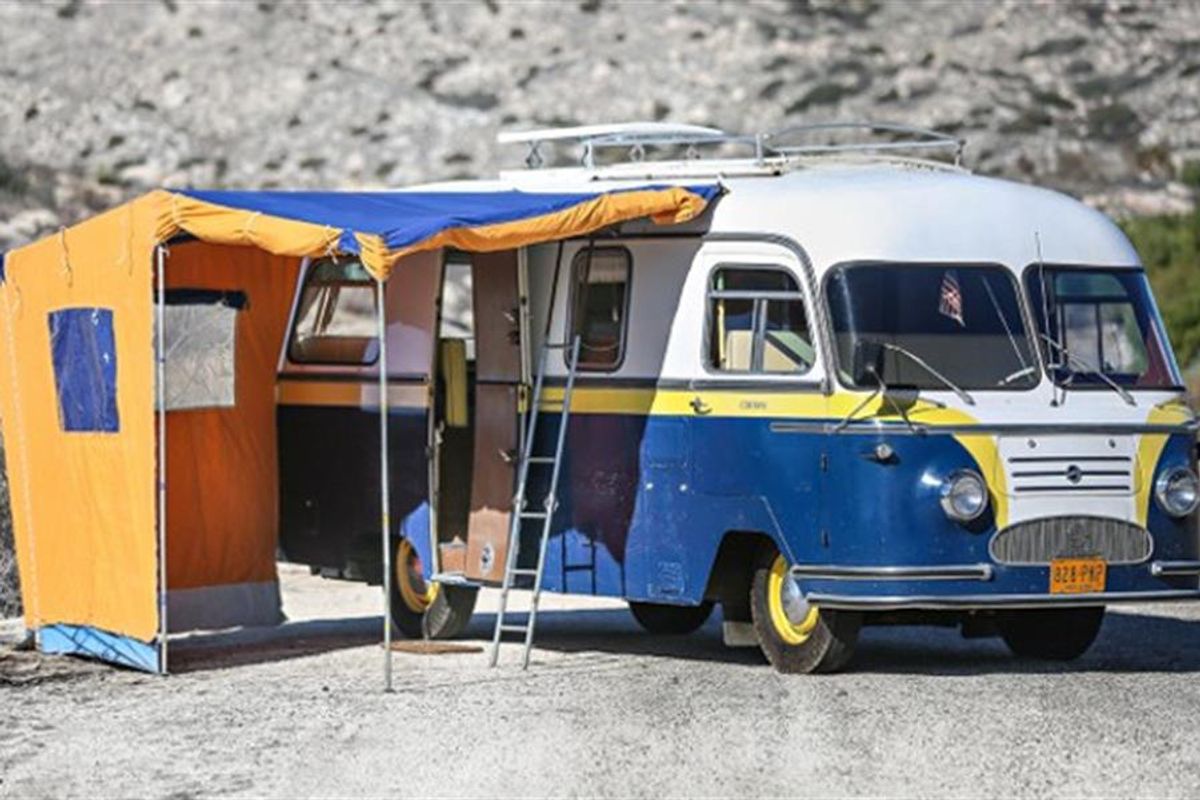 Purchased New by Members of the Vanderbilt Family with Bespoke DetailsStored in Original Family Ownership from 1971 to 2015Retains Original Sleeping Bags, Towels, Side Tent, Matchbooks, Glassware, and MoreExtraordinarily Well-Preserved and Rare Coachbuilt Aluminum ReisemobilOne of the Most Unusual and Fascinating Discoveries in Recent Memory

THIS CARIn 1959, Hungarian Count Anton Szapary and his family visited the New York Auto Show, touring the displays and eventually happening upon an extraordinary creation. It was a coachbuilt camper by the German firm Mikafa, clothed in an aluminum body with innovative details. The count was so impressed that he comissioned the firm to build a “Landyacht” for his family. The family was accustomed to luxury, since the countess was the granddaughter of Cornelius Vanderbilt II, and was raised in The Breakers, the legendary 62,482 square-foot Newport, Rhode Island, mansion built by her grandfather. This camper would become a Vanderbilt home on wheels.

Mikafa, a former aircraft manufacturer, was known for its hand-built trailers and reisemobils (campers). A propane stove, refrigerator, heater, and high-fidelity Becker/Blaupunkt radio were fitted. Mikafa focused on reducing weight, even using lightweight German-made cookware. The landyacht weighed only about 4,500 pounds, and was built on the chassis of a Tempo Matador truck, powered by a 1,500 cc Austin A50 Engine.

The Szapary family chose a blue and yellow color scheme that carried into the seating, curtains, and even into a set of sleeping bags and towels. The camper was equipped with etched glassware depicting wildlife scenery, bone-handled cutlery, and soup bowls from Biarritz, France. They named it Czigany, and had the word painted on the side of the camper. A handwritten note in the documentation hints that, as equipped, the vehicle’s cost may have been upward of $15,000. At the time, a Mercedes-Benz 300 SL Roadster was priced around $11,000.

The Szapary family took delivery in 1959 in Germany and embarked on the first of two three-month journeys throughout Europe. The Landyacht was then shipped to the US, where it traveled between the family’s home in Pound Ridge, New York, and The Breakers. It was parked in 1971 with 13,000 miles in a garage that the family custom-built for it, and remained there until the consignor purchased it from the Szapary family in 2015.

The camper reportedly had been untouched, but the consignor was not prepared for what he found. Original auto club badges, a guest book, and a 48-star American flag remained, among other treasures, along with extensive original manuals and correspondence. Even the coasters and matchbooks printed with “Czigany” survived, as did the cookware, glassware, sleeping bags, towels, and fitted camping tent.

It is believed six examples of the Mikafa Reisemobil may survive in Europe and one in the US, according to the consignor. This example promises to be the most well-preserved and significant of all. It is a completely intact and rolling Vanderbilt family time capsule. It offers a very personal and highly detailed window into the lives of one of the wealthiest families in history.