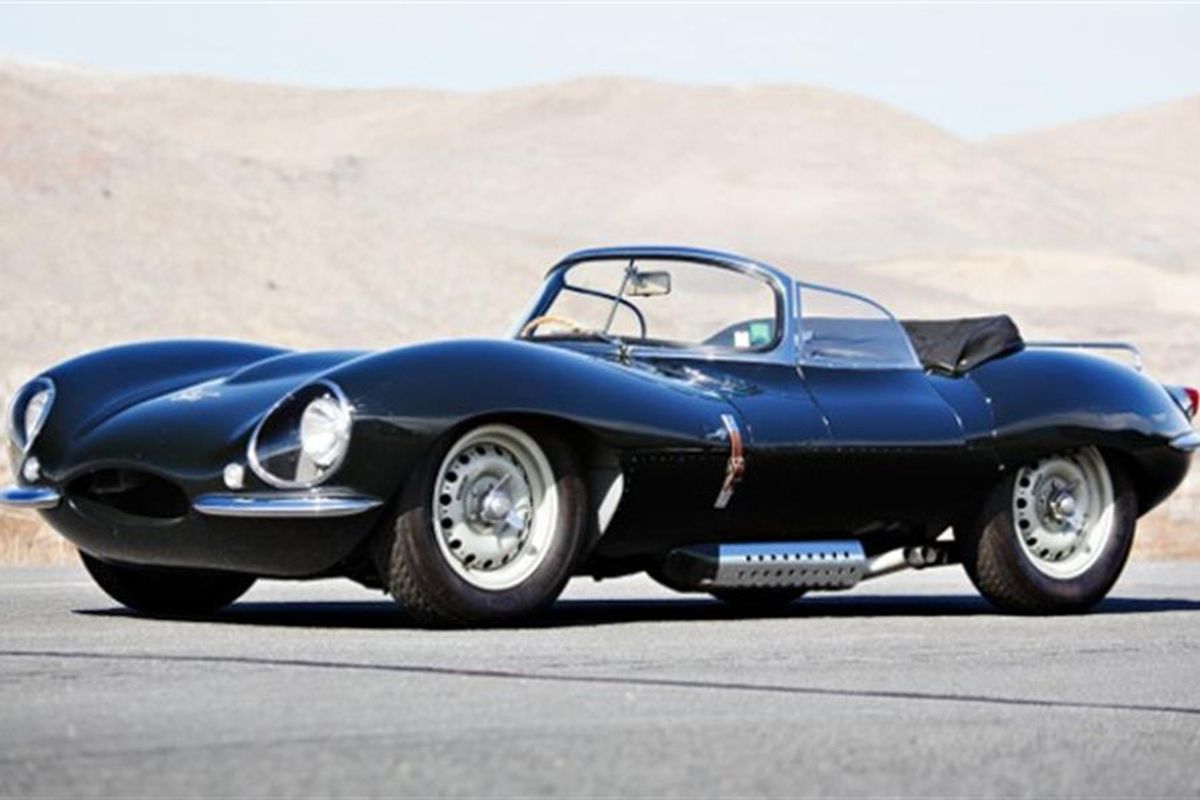 THIS CARIn 1953, Jaguar began to develop a replacement for its C-Type, the car that had established the Coventry firm’s international reputation with wins at the 24 Hours of Le Mans in 1951 and 1953.

Under the direction of company founder Sir William Lyons and chief engineer William Heynes, a state-of-the-art sports racing car began to take shape, the likes of which had never been seen. When it made its official competition debut at the 24 Hours of Le Mans in June 1954, the Jaguar D-Type took the racing world by storm.

Inspired by the latest advances in aircraft technology, the D-Type featured a high-strength alloy monocoque chassis, with load-bearing external panels and tubular subframes fore and aft. This new approach represented a radical departure from conventional automotive design; more traditional manufacturers did not implement similar technology until decades later. In addition to its revolutionary chassis, the D-Type benefited from numerous aviation-inspired features, including four-wheel Dunlop disc brakes, a deformable fuel bladder, and dry-sump lubrication.

Malcolm Sayer, who had left the Bristol Aeroplane Company to work for Jaguar, was given a free hand to create the shape of the D-Type. An expert aerodynamicist, Sayer described his design brief as “functional efficiency at all costs.” Nevertheless, the car’s highly effective bodywork, rendered in lightweight aluminum and perfected in the wind tunnel, was undeniably beautiful, with compound curves and ideal proportions.

While so much of the D-Type’s design broke new ground, the new Jaguar was powered by a development of the proven XK twin-cam, straight-six engine that debuted in 1948. Equipped with three Weber 45 DCO3 carburetors, high-compression pistons, high-lift camshafts, and an asymmetrical wide-angle cylinder head, the D-Type’s engine produced at least 250 bhp and allowed for a top speed in excess of 170 mph.

Campaigned by the Jaguar factory team and well-heeled privateers, including Ecurie Ecosse and Briggs Cunningham, the D-Type achieved tremendous success during its racing career. Notable highlights include three overall wins at the 24 Hours of Le Mans (1955, 1956, and 1957), two wins at the 12 Hours of Reims (1954 and 1956), and outright victories at the 1955 12 Hours of Sebring and the 1956 Grand Prix of Spa. D-Types won countless other sports car races around the globe.

In October 1956, at the height of the D-Type’s career, Jaguar announced that it was temporarily retiring from motor racing to focus on production cars. By this time, most of the D-Types had already been delivered to customers; however, 25 cars were unsold.

With these D-Types, Sir William Lyons saw an opportunity to recoup some of the substantial investment made into the factory’s racing program and, at the same time, take advantage of the booming US market for European sports cars. With this in mind, Lyons decided to have the 25 remaining D-Types modified and presented for sale to the public as a limited-production, road-going version of his Le Mans-winning race car.

On January 21, 1957, Jaguar Cars Ltd. issued the following statement: “Jaguar are to produce a new 2-seater sports-racing car as a result of the increasing demand from America for a type of vehicle equally suitable for normal road use and sports car racing. The new model which, initially, will be for export only, will be based on the already famous Le Mans type Jaguars and will be known as the Jaguar XK ‘SS’ type.

“The new model will depart from the somewhat spartan simplicity of the ‘D’ type by the incorporation of a full-width orthodox windscreen, folding hood, completely equipped touring type instrument panel, well-upholstered seating, luggage grid, bumpers and other refinements appropriate to a car intended for fast touring as well as for sports car racing. The car will be fitted with Dunlop disc brakes and the general construction and mechanical specification will follow closely that of the outstandingly successful ‘D’ type. The new model will be an addition to the Jaguar range and will not supplant any existing models. First deliveries to America are planned to commence in February. Price in USA $6,900.”

Jaguar had constructed only 16 examples of the XKSS when, on the evening of February 12, 1957, a fire engulfed the Browns Lane plant, destroying the nine unfinished chassis. As Lyons had anticipated, the US was the single largest market for his latest sports car, and 12 of the 16 examples were delivered stateside. Of the remaining supply, two were delivered to Canada, one was sold to Hong Kong, and a sole example remained in Britain.

In August 1957, Road & Track reported on the XKSS and concluded: “The latest SS Jaguar is advertised as a genuine dual-purpose car, and certainly as a ‘thinly-disguised road racing machine’ it will delight the enthusiast.” The magazine also subjected the new Jaguar to a full road test and recorded the following remarkable figures: 0–60 mph in 5.2 seconds, 0–100 mph in 13.6 seconds, standing quarter mile in 13.9 seconds, and 149 mph top speed.

Given their pedigree and performance, most were immediately put to use on the racetrack. However, a few of the cars did fulfill their intended purpose and were instead used as thrilling daily transportation. Among those who enjoyed the Jaguar on the road was famed actor and racing driver Steve McQueen, who purchased his car secondhand in 1958 and kept it for almost a decade. Despite its thoroughbred bloodline and exclusivity, it was the XKSS’s long-term association with “The King of Cool” that forever defined the car’s image and reputation. Even today, the Jaguar XKSS remains an undisputed automotive icon.

The history of this XKSS can be traced to November 21, 1956, when XKD 575 was counted among the stock of Jaguar’s unsold D-Types.

In early 1957, Jaguar converted XKD 575 into XKSS 716 and finished it in the definitive color scheme of British Racing Green with tan leather upholstery. In May 1957, the completed car was dispatched to Jaguar of Eastern Canada, an official distributor based in Montreal. On June 12, it was sold to its first private owner, Stanley C. McRobert.

Mr. McRobert, who sold his XK120 Drophead Coupe to buy the XKSS, entered the new Jaguar in a dozen races and hill climbs throughout 1957 and 1958, winning all but one race at Harewood Acres, where he finished second. In mid-1958, Mr. McRobert sold XKSS 716, after he bought the other Canadian-delivered XKSS, chassis 760, which had been converted back to D-Type specification by Briggs Cunningham’s team manager, Alfred Momo.

The next owner of XKSS 716, Don Stewart, continued to race the car in Canada, participating in races at Green Acres and Harewood Acres. In 1958, Mr. Stewart sold the Jaguar to popular Ontario-based racer Ray Carter.

In May 1959, the Canadian Racing Drivers Association (CRDA) organized its first professional race, a 500-kilometer enduro held at Harewood Acres. It was there, in front of an estimated 10,000 spectators, that local hero Ray Carter and his co-driver Craig Hill drove the XKSS to an overall win, defeating rival John Cook in his Maserati 300S.

Late in 1960, Ray Carter found himself in financial trouble and fellow Canadian racer Nat Adams purchased the XKSS from a finance company. Adams then repainted the car red and entered it in several races at Mosport, including the Canadian Grand Prix, where he finished 12th overall.

In January 1962, Nat Adams sold XKSS 716 to a dentist in Ohio, and the car relocated to the US. By 1968, the Jaguar had been bought by Peter Kalikow, the well-known New York car enthusiast and collector. In a recent interview, Mr. Kalikow recalled the “fine XKSS,” which he sold in the early 1970s. “I regretted it and then tried to find the car and buy it back with no success,” Mr. Kalikow said. “Since then I have never sold a car.”

In or around 1980, the XKSS was sold to John Harper, a UK-based Jaguar enthusiast and racer, who actively participated in the popular Modsports racing series during the 1970s. During his ownership, Mr. Harper had Lynx convert the car into D-Type specification, though he thoughtfully retained all the rare original XKSS components. In this form he raced the car in vintage events throughout 1981 and 1982.

XKSS 716 was then sold to John Pearson, founder of Pearsons Engineering, among the world’s leading specialists in Jaguar-powered sports racing cars. Mr. Pearson continued to race the car in historic events during 1983 and 1984. In 1993, the Jaguar was sold, through famed racing driver Brian Redman, to Don Marsh, a collector based in Columbus, Ohio. The XKSS remained in Mr. Marsh’s collection until 2000, when it was sold to the current owner, a collector with an impressive stable of significant sports and racing cars.

The consignor has continued to enjoy the Jaguar on both road and track, having participated in vintage races and long-distance tours. About 10 years ago, he decided to return the car to its original XKSS specification and enlisted Gary Pearson, the son of former owner John Pearson and the current principal of Pearsons Engineering, to undertake a complete, show-quality restoration.

During this process, a painstaking effort was made to restore and refit the original XKSS components to the Jaguar, which had otherwise been carefully preserved and maintained over the previous decades. Significantly, XKSS 716 has not suffered from a major accident and retains its original chassis, data tag, body, engine block, and cylinder head, something that precious few examples of the D-Type and XKSS can claim.

Beautifully restored and refinished in an attractive deep, dark green, XKSS 716 made its concours debut at the Pebble Beach Concours d’Elegance® in August 2010, where Jaguar was featured in recognition of its 75th anniversary. To honor the company’s most famous and beloved creation, the show’s organizers arranged a special XKSS class, reuniting 12 of the 16 original cars. Since this outing, the XKSS has been shown at the prestigious Concorso d’Eleganza Villa d’Este and driven on several exclusive tours in Europe and North America. Today, it remains in superb cosmetic and mechanical condition and performed admirably on a recent outing, with impressive power, light yet precise controls, confidence-inspiring handling, and a glorious, hair-raising soundtrack.

This particular XKSS possesses a relatively long and successful competition history, with excellent results and no record of serious incident during its career. It has a continuous, well-documented provenance that counts respected collectors among its former owners. It has also proven reliable in numerous vintage races and long-distance tours, yet remains in fundamentally original order six decades after it was built. Its recent restoration was conducted by one of the leading marque specialists, whose expertise and experience has ensured that its performance is no less impressive than its appearance.

Without question, this car is among the very best examples of the original XKSS, the limited-production, road-going version of the D-Type – one of the most successful and important models in the history of endurance racing. These Jaguars were the finest, most technically advanced sports cars of their day, and, in the years since, they have assumed an iconic, almost mythical status.

A decade has passed since an XKSS was last offered for sale at public auction, with most examples now jealously guarded in private collections. When the next example might become available is anyone’s guess, but it will almost certainly pale in comparison to XKSS 716.