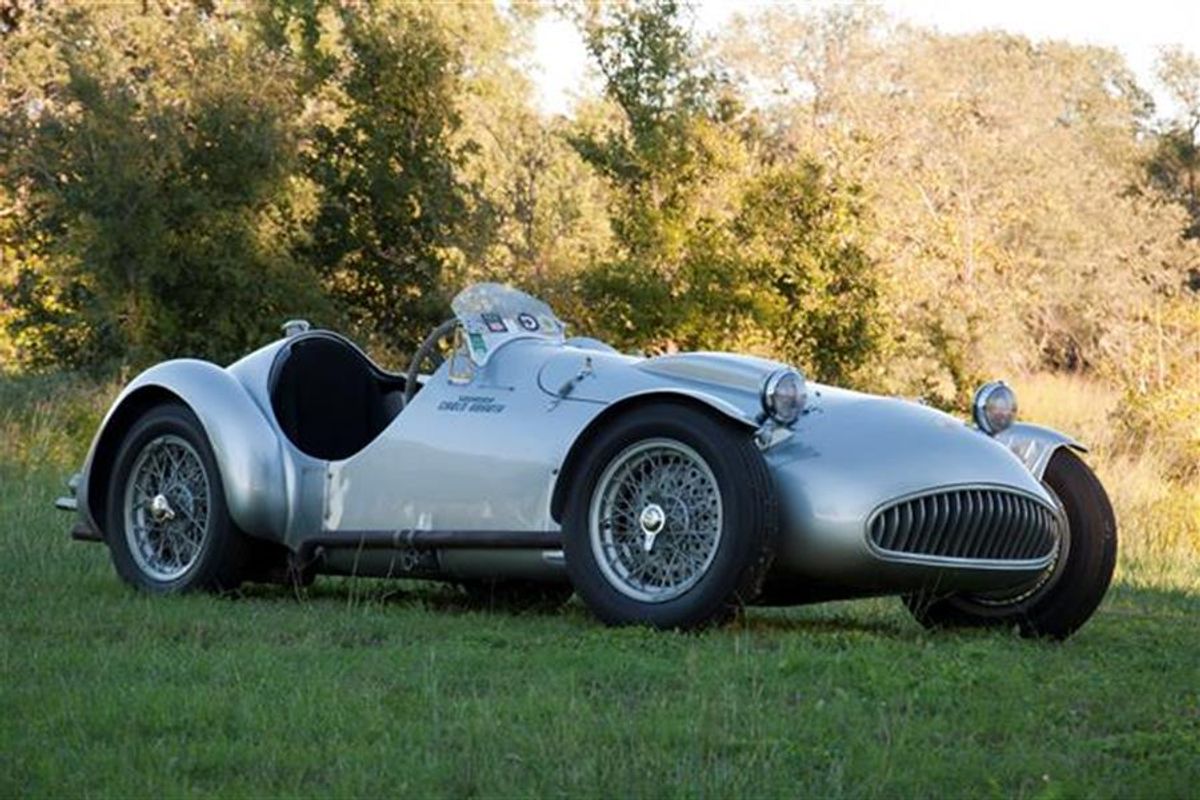 To be sold at Amlia Island  on 11th March - Estimate: Upon Request

The Marque: Cisitalia was founded by the bigger than life vision of Piero Dusio who paid to release Ferdinand Porsche from French Nazi prison to work under Cisitalia to created some of the most iconic and historically important post war European sport cars. With models like the 202 honored in the New York Museum of Modern Art as one of the most beautifully designed automobiles, this 204A, last raced by Tazio Nuvolari, and the 360 Grand Prix project that ultimately bankrupt his company, “Compagnia Industriale Sportiva Italia” Cisitalia made a mark in history as one of the most impressive and historically important Italian automaker despite only having a very short production life.

Ferdinand Porsche and Carlo Abarth work under Piero Dusio’s direction until Cisitalia the brand bit too big of a financial apple with the grand 360 Grand Prix project, taking Cisitalia to bankruptcy. Porsche went on to develop one of the most iconic automobile brands on his own and Carlo Abarth received in severance Cisitalia’s production equipment and 3 204A cars. Chassis 04/08 would be the 204A Spyder Corsa that Carlo Abarth bespoke remanufactured to Tazio Nuvolari’s specific competition requirements.

This Car: This 1950 Cisitalia-Abarth 204A was raced by Tazio Nuvolari in two Grand Prix competitions in 1950: the Targa Florio and Palermo Monte Pellegrino. Recently, it was Classiche certified with the highest grade of originality by Abarth Co. as the first car registered by Carlo Abarth under Abarth Co. and certifying its serendipitously important history and originality. Created as one of the last cars that Ferdinand Porsche was involved in during his time in Cisitalia before establishing his own company and one of the last cars Cisitalia produced before Piero Dusio closed the legendary Cisitalia factory.

Chassis 04/08 is fully documented with Abarth Classiche, FIA Passport, FIVA Card, original documents, extensive period photography, and the LUCE 1950 video showing Nuvolari driving this Cisitalia. With verified certificates of origin, it has documented racing pedigree of legendary magnitude. First raced at the 1950 Targa Florio by Tazio Nuvolari, it was the 1950 Palermo Monte Pellegrino race that would go down in history as the last race that Tazio Nuvolari participated in and won. In the 1950’s, it was raced in 18 major international races including Mille Miglia, Parma, Gran Premio di Napoli, Coppa Gallenga, Trullo d’Oro Bari, and the Buenos Aires 1000. After finishing its Grand Prix racing career, the car continued to be used in racing school training in Argentina until the late 1960’s.

Its history is well known and documented since new with known ownership from its first owner in 1950, the newly formed Abarth & Co Factory, then in 1953 it was sold to E. Ferri for competition. In 1954, it was sold to J. Saggese and in 1958 its last competition owner was O. Silich. In the 1960’s it was owned by Asociación Argentina de Automóviles Sport as a traninig car for racing drivers. It was in 1978 that Señor Sergio Lugo purchased the car and became its longest caretaker. In 2009 he began the tedious task of restoration which was headed by marque specialist Jose Maria Pedota in Buenos Aires, Argentina. Restoration was completed in 2011 in time to register the car to participate once again in the 2012 Mille Miglia where it was awarded the Premio Speciale as the most historically significant entry that year. Once in Italy, it was displayed at the Museo Tazio Nuvolari and Museo dell'Automobile di Torino. It made the trip to America for its first time in history in 2013 when it was purchased by Mr. Russell Whiteis of California whom commissioned for the car to get its FIA passport and to be shown at the Quail Motorsports Gathering, Silverstone Classic, and Salon Prive Concours d’Elegance in London.

The car’s most significant mark in automotive history was without a doubt the fact that it was driven in the last race that the legendary driver Tazio Nuvolari ever participated in and he deservedly won, finalizing one of the most important racing careers the world has ever known.
Nuvolari’s racing career started in 1927 and accomplished more than 72 major victories and 150 in record, but it was this 204A Cisitalia-Abarth that successfully took him to his last winning podium in 1950 before “The Flying Mantuan” died in 1953 of natural causes. Nuvolari as one of the most important racing figures in history was respected and admired by all of his peers, including his greatest racing adversary Achille Varzi. At his funeral, none other than Juan Manuel Fangio and Alberto Ascari would help carry the coffin of their late hero Nuvolari. Admired and respected by the greatest in motorsports, these are some of the most memorable quotes about Tazio Nuvolari:

“The greatest driver of the past, present or future” - Ferdinand Porsche

"At the first bend, I had the clear sensation that we would end up in a ditch; I felt myself stiffen as I waited for the crunch. Instead, we found ourselves on the next straight with the car in a perfect position. I looked at Nuvolari. His rugged face was calm, just as it always was, and certainly not the face of someone who had just escaped a hair-raising spin." - Enzo Ferrari [On being a passenger with Tazio Nuvolari during pre-race practice]

There is no doubt that with such immense pedigree this 1950 Cisitalia-Abarth 204A Spyder Corsa is a secure passport to participate in the most prestigious racing and concours events around the globe.