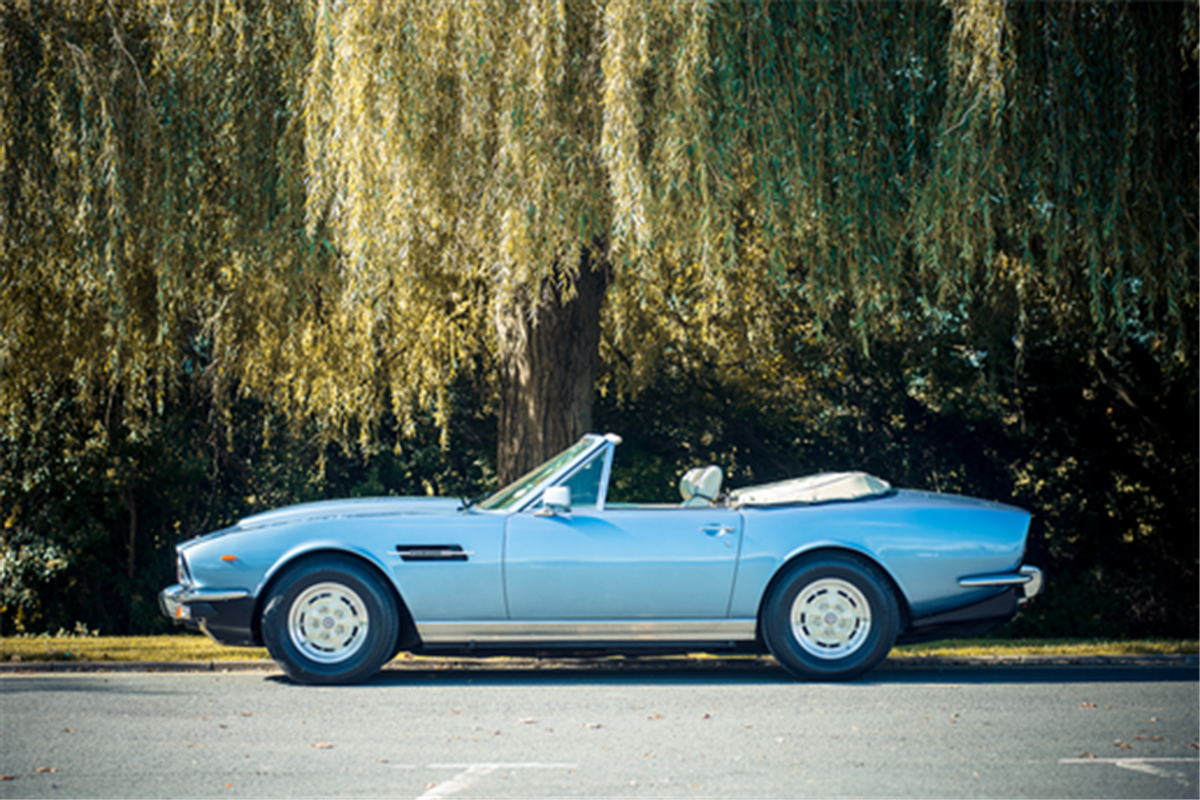 The catalogue for Silverstone Auctions May Sale is now closed. This special selection of 77 classic and sports cars will be offered on Saturday 13th May at Silverstone circuit at 2pm. A luxury watch and automobilia sale will be held in the morning at 11am.

Inluded in the sale:

The first Aston Martin V8 Volante rolled off the production line at Newport Pagnell in 1978 to worldwide acclaim and went on to be Aston's saviour. Like its older siblings, the DB5 and DB6 but more so, the V8 Volante kept the order books full by making inroads into the North American market. As the convertible version of the new luxury Oscar India V8, the car had, as one long established motoring magazine put it “the brutish good looks of an aristocratic rugby player and the interior refinement of a gentleman's club”. They went on to say 'if the contemporary Ferrari of the day was likened to a “polished playboy in snakeskin loafers” the Aston V8 Volante was the “solid chap in burnished brogues, equally at ease in town or country” '.

This 1979 V8 Volante has the distinction of being an early right-hand drive car in rare Tourmaline Blue with Fawn leather piped in blue. When the previous owner, Mr. Webb, purchased the car from Aston specialists, Runnymede in 2010 he commenced a period of restoration and enhancement to his own exacting standards and work was carried out to the boot floor, sills and floor pan. The notoriously fickle servo assisted brakes were rebuilt and now stop the car without a heart-lurching pause and the suspension, which can take a bit of a hammering in such a heavy car, was stripped, re-bushed and reassembled to factory settings.

At this time Mr. Webb decided to enhance his driving pleasure by commissioning the respected Aston Workshop of Durham to fit a six-speed gearbox from a DB7, effortlessly mating the 5.3-litre V8 to the new transmission. The original automatic gearbox and all its ancillaries were retained separately. To suit the conversion, the speedometer was replaced with a later Aston model with a digital odometer and the new instrument blends in easily amongst the burr walnut surround. The originally indicated mileage of 43,966 is believed to have been correct and marries nicely with a number of bills and old MOTs on file. Since this work was carried out, Mr. Webb added a mere 2,900 miles. The history file lists nearly £50,000 worth of service and maintenance bills by Aston main dealers and marque specialists and there are over 180 photographs in the history file, detailing the work at various stages.

In November 2015, Mr. Webb entrusted the car to Silverstone Auctions, and such was the quality and rarity of this special motorcar, it captured the attention of an Aston collector, who became the car's new owner after a tense bidding war. Also known to be fastidious, the Aston's new custodian undertook a further program of enhancement that included a respray in the correct Tourmaline Blue and detailed improvements to the leather interior and the wood veneers. Some mechanical work was required and this was carried out by respected Aston specialists 'Oselli' of Buckinghamshire. The car is now offered with BMIHT Certificate, original handbook, brochure, an MoT until October 2017 and extensive bills and invoices dating back to the 1980s. It also comes with its original automatic transmission in a box should a future owner wish to reinstate it, and the odometer shows a shade over 3,200 miles which equates to 47,166 miles in total. This elegant Volante now looks absolutely superb with gleaming paintwork and a smart dark blue hood, which works perfectly at the touch of a button, and the 5.3-litre V8 barks into life effortlessly before settling to a contented burble.

To conclude, it is always a pleasure for Silverstone Auctions to welcome old friends back to the fold and this superb motor car is ready for the next stage of its life. It is must be noted that V8 Volantes are enjoying a resurgence in popularity helped by recent results for 'X-Pack' and 'Prince of Wales' cars and the fact that Summer is just around the corner.