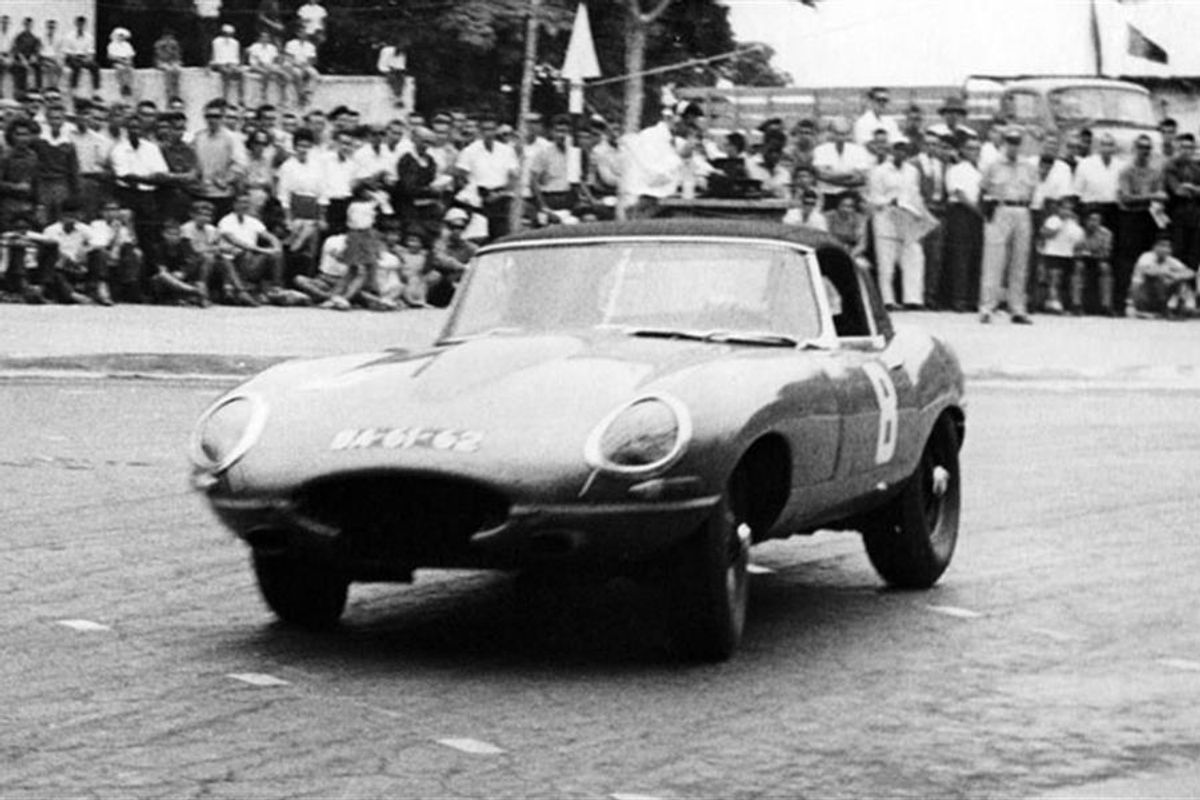 Sotheby's Villa Erba sale offers an abundant range of post-war sports cars to cater to every enthusiast. Headlined by a fantastic 1961 Jaguar E-Type 3.8-Litre with racing history in Portugal and Angola, a variety of marques are well represented. With a BMW 507 from over five decades of single ownership, a well-restored Alfa Romeo 1900 C, stunning Porsche 356 Speedster, and a race-ready Alfa Romeo GTA, these cars are ideal for the concours lawn, historic racing, or just a causal Sunday drive.


Racing is always believed to improve the breed, and part of the legend around the Jaguar E-Type was formed from its competition lineage back to the C- and D-Types, so it is hardly surprising that a very small number of E-Types ended up competing at the highest levels of GT racing in period; this E-Type is one of those period racers.

One of the first 10 delivered to Portugal in 1961, this 3.8-Litre Series 1 Roadster is an early flat floor example, the most desirable of all E-Types. It was delivered via the official importer Martins & Almeida of Lisbon and the dealer João Gaspar to its first owner, Manuel ‘Mané’ Nogueira Pinto of Porto; a copy of the original invoice confirms the original specification, as does the JDHT Certificate.

Nogueira Pinto was a well-known racing driver and a member of a prominent Portuguese racing family, so it was inevitable that this E-Type would become his weapon of choice for 1962–1963, and during this time his record of success with his E-Type was outstanding. The debut race on 3 June 1962 for Nogueira Pinto’s E-Type was the ACP Cup (Automobile Club of Portugal) at Porto’s Circuito de Lordelo do Ouro; Nogueira Pinto qualified 2nd behind the eventual winning Ferrari 250 SWB. Unfortunately, the E-Type would go on to retirement. Undeterred by this shaky start, Nogueira Pinto shipped his E-Type to Southeast Africa for the GT support race of the 1962 Mozambique Grand Prix at Autodromo de Lourenço Marques, which he would win against another 250 SWB and a Porsche Carrera Abarth GTL. By September, 875807 was back in Portugal, and starting from fourth for the Montes Claros race against stiff opposition in the form of a 250 SWB, two 550 Spyders, a single 718 RSK, and a Maserati 300S; Nogueira Pinto would produce a brilliant performance around the tight street circuit to take the chequered flag in first position. It is known that Nogueira Pinto competed with his E-Type at the 1962 Grand Prix of Angola, but the result is unknown.

Nineteen sixty-three brought a repeat victory for Nogueira Pinto and 875807 at Montes Claros in the rain, but the most interesting meeting would be the 1963 Grand Prix of Angola. After beating another E-Type and 250 SWB to victory in the 6th City of Luanda Cup support race, 875807 lined up on the grid for the 1963 Grand Prix of Angola against the likes of Lucien Bianchi in Ecurie Francorchamps’ highly developed Drogo-bodied 250 SWB, another Ecurie Francorchamps 250 GTO and eventual winner Hermann Müller in his Porsche 718 RSK. Unfortunately, Nogueira Pinto and his E-Type finished outside the top 10, so little is known of the result.

Following retirement from racing, 875807’s history resumes when it was discovered as a complete car (painted red with black interior) but in need of a full restoration. The nut-and-bolt restoration was finished in 2011 in time for the 50th E-Type celebrations, and it included a bare-metal re-spray and re-trim back to its original specification. The engine, gearbox, and differential rebuilds were carried out by the highly regarded Julian Godfrey Engineering of East Sussex. Unlike many E-Type restorations, few panels were replaced due to minimal corrosion and during its restoration, care was taken to retain original competition features such as the brake cooling holes in the bonnet bulkhead, but these do not compromise its current beautiful presentation. During the restoration, the cooling system was upgraded with an alloy radiator and header tank, and Coopercraft brakes were fitted.

Offered today from Portugal with all-matching numbers and in its original specification Opalescent Silver Grey with Dark Blue interior, this highly sought-after early flat floor E-Type presents a unique opportunity to own a Jaguar with a very special history. Eligible for some of the finest pre-’63 and pre-’66 historic races, or simply to be enjoyed on the road, this E-Type will offer the almost unique option of either for the next owner.