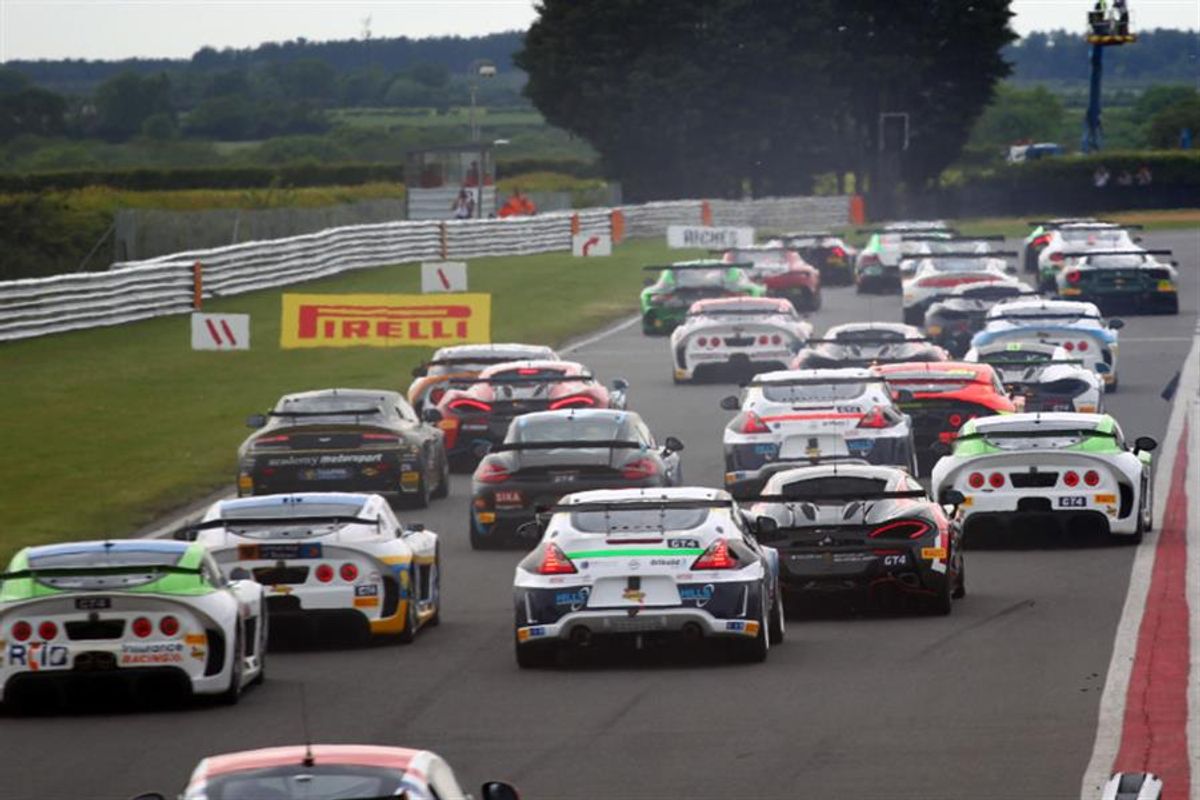 Jonny Adam equalled the record for most ever British GT3 wins earlier today after the Scot and TF Sport co-driver Derek Johnston capitalised on Barwell Motorsport’s drive-through penalty to win Race 2 at Snetterton.

In GT4, Black Bull Garage 59’s Ciaran Haggerty and Sandy Mitchell claimed their first victory of the season and took advantage of HHC Motorsport’s non-finish to give their title aspirations a timely shot in the arm.

A second victory of the day for championship leaders Jon Minshaw and Phil Keen would have seen them equal the winningest GT3 record, but instead it was Jonny Adam who joined Hector Lester and David Ashburn on 11 after he and Derek Johnston ended their 13-month wait to stand on the top step of a British GT podium.

Not that the reigning champions enjoyed an easy ride. Lining up third, Adam immediately jumped ahead of front-row starter Sam Tordoff when the lights went out but didn’t have the pace to track pole-sitter Keen who set about establishing a handy lead that would go some way to negating the #33 Barwell Lamborghini’s 10-second success penalty incurred for winning Race 1.

Keen’s lead was nine seconds when the pit window opened after 25 minutes, which ordinarily would have handed TF Sport the advantage. But when a stalled Ginetta trapped Johnston in his pit box Minshaw duly sailed past and into what looked like a winning position.

A Safety Car period to remove Callum Macleod’s stranded Bentley subsequently bunched the pack, but GT4 cars between Johnston and Minshaw removed the Aston Martin’s only realistic on-track opportunity. Instead it was a drive-through penalty, handed out for the Huracan being marginally under its minimum pitstop time, that finally allowed Johnston, Adam and TF Sport to claim their first victory since Rockingham 2016.

Minshaw and Keen’s drive-through penalty elevated Barwell team-mates Liam Griffin and Sam Tordoff to second. The latter started alongside Keen and dropped behind Adam at the start but harried the Aston Martin throughout his opening stint before falling back as a result of the seven-second success penalty. Griffin emerged third and duly drove a measured race to collect the #6 crew’s second runner-up trophy of the weekend after capitalising on the sister car’s penalty.

The battle for third also came alive after the Safety Car period. TF Sport struggled all weekend but ended up with two cars on the podium after Mark Farmer and Jon Barnes worked their way forward
from seventh on the grid. The latter picked up two places on the opening lap as a result of Team Parker Racing’s Seb Morris and Matt Griffin banging wheels before claiming another spot when Macleod’s Bentley suffered a puncture.

Farmer then held off a charging Rick Parfitt Jnr - whose co-driver Morris was handed an early drive-through penalty for his part in the incident with Griffin - over the second stint to claim the final place on the podium.

The Safety Car brought Parfitt Jnr back into play over the closing laps but, as he became bottled up behind Farmer so Jack Mitchell - whose Macmillan AMR co-driver James Littlejohn span to the back of the GT3 pack on lap one - also closed in. The trio, followed closely by Minshaw’s recovering Lamborghini, finished just over a second apart.

AMDtuning.com’s Mercedes-AMG finished seventh on the road but had five seconds added to its race time when taking the chequered flag for multiple track limits violations. The regulation change, implemented as a result of what happened at Rockingham, therefore dropped Lee Mowle and Ryan Ratcliffe behind Duncan Cameron and Matt Griffin’s Spirit of Race Ferrari in the final classification.

Barwell Motorsport’s Griffin won the Blancpain Gentleman Driver of the Weekend Award for finishing second in both races, while Keen’s new GT3 benchmark - 1m48.498s set in the day’s earlier race - earned him the Sunoco Fastest Driver of the Weekend trophy for a second British GT round running.

They might have been denied victory in Race 2 but Minshaw and Keen’s championship lead has increased to 23.5 points over Parfitt Jnr and Morris, while Johnston and Adam are up to third.

After a tough opening weekend at Oulton Park and return to the podium at Rockingham Black Bull Garage 59’s Ciaran Haggerty and Sandy Mitchell finally claimed their first win of the season at the same venue as their breakthrough GT4 victory last August.

It was another McLaren 570S that made the early running, Tolman Motorsport’s Joe Osborne converting his pole position into a comfortable lead over Lanan Racing’s David Pittard, HHC Motorsport’s Stuart Middleton and Haggerty before the pitstops.

Osborne remained behind the wheel for as long as possible before David Pattison climbed aboard. The Pro/Am crew should have inherited a sizeable advantage over the chasing Silver Cup pairs who must serve a longer minimum pitstop time, as well as the success penalties carried over from Race 1. However, the Safety Car’s appearance shortly after the window closed negated all of that and left Pattison exposed to Alex Reed, Will Tregurtha and Mitchell who duly closed in and passed the McLaren soon after racing resumed.

Incredibly, Mitchell used the same opportunity to launch an surprise move on Tregurtha whose class lead lasted less than two corners. The pair continued circulating together until the HHC driver saw a chance to make amends at the final hairpin, only to find the apex blocked by another Ginetta while diving down the McLaren’s inside. The resulting T-bone caused significant damage, which ultimately sent the 17-year-old, who’d earlier extended his championship lead with Race 1 victory, into Riches’ barriers and retirement.

Mitchell was left to manage the gap back to Reed, who eventually claimed his, Pittard and Lanan’s second runner-up spot of the weekend 11 seconds further back.

Finding himself between the Safety Car and overall race leader allowed Pattison to gain almost a lap on the rest of his GT4 pursuers when he was waved past before the restart, which ensured he and Osborne at least salvaged an overall podium to go with their Pro/Am victory. Track-club’s Adam Balon and Adam Mackay continued their consistent weekend with fourth in class ahead of PMW Expo Racing/Optimum Motorsport’s reigning champions Graham Johnson and Mike Robinson.

Tregurtha’s best of 1m58.650s was not only good enough to earn him GT4’s Sunoco Fastest Driver of the Weekend Award but also a new class lap record for Snetterton. And Macmillan AMR’s hard work was also rewarded with the PMW Expo Team of the Weekend prize after both its GT3 and GT4 crews were involved with replacing their Aston Martin GT4’s gearbox, fuel pumps and seals, and hydraulics system in time for this morning’s first race.

All of that leaves Middleton and Tregurtha still leading the championship but by a reduced 9.5 points from Reed and Pittard. Mitchell and Haggerty’s Race 2 victory lifts them to third.

Jonny Adam, #1 TF Sport Aston Martin V12 Vantage GT3: “At last! The record’s been a long time coming. But at the start I knew I had to pass at least one of the Lambos because their race pace is so fast and Phil [Keen]’s qualifying lap was pretty special. I’m not sure how much time we lost in the pits but at least we were in a position to push Barwell into an error. Derek [Johnston]’s probably the happiest guy in the pitlane just now! All of my victories have been in Astons - nine in this baby [the V12 Vantage] and two in the DBRS9 is a nice personal achievement, but we’re focused on the championship and desperately trying to claw points back against Barwell.”

Sandy Mitchell, #100 Black Bull Garage 59 McLaren 570S GT4: “That was equally as good, if not better than my first win here last season! After the pitstops I came out in P4 and had to make a few moves before the Safety Car appeared. Then, when racing resumed, I made a good restart and got past Alex [Reed] into Turn 2 with a good move up the inside, and then managed to switch back on Will [Tregurtha] just after he’d passed the leader. It was all about managing the traffic after that - I probably did more overtaking in that stint than any other! Will was unlucky when trying to get back past me, but his DNF helps us in the championship.”