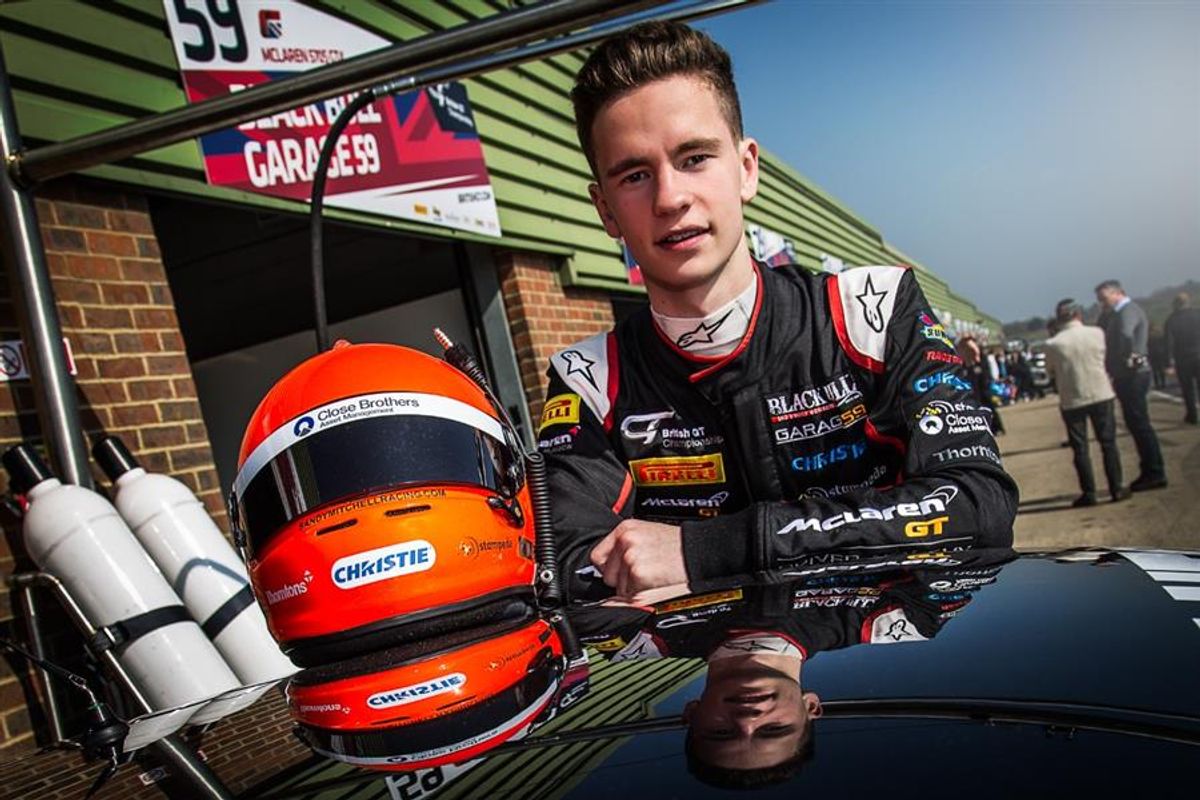 Scots teenager Sandy Mitchell, partnered by team-mate Ciaran Haggerty, scored his first win of the year when the duo claimed victory in the latest round of the British GT4 Championship at Snetterton.

After finishing third in the day’s opening one-hour race on the 2.9-mile Norfolk circuit, Mitchell ensured the win in the second 60-minute race with a brilliantly audacious move from third to first the in the space of 100-yards.

Having taken over his Black Bull Garage 59 McLaren 570S GT4 from 20-year-old fellow Scot Haggerty in fourth place with half the race remaining, Mitchell proceeded to demonstrate why he is one of the most exciting young drivers in sportscars.

The 17-year-old from Forfar, who along with fellow McLaren GT Academy driver Haggerty claimed the first British GT win of his career in the corresponding race last year, quickly closed the gap on the third-placed #51 Ginetta.

Then, having slipped passed into third on the approach to the tight right-hander at Oggies, Mitchell expertly positioned his car wide on the entry to maximise his exit speed.

Ahead, as the #55 Ginetta of championship leader Will Tregurtha eased passed the leading #56 McLaren of David Pattison at the midpoint of the corner, Mitchell accelerated down the inside line to overtake both cars. It was a lead the talented young Scot was never to relinquish.
“That was a brilliant race,” Mitchell said afterwards. “There was lots of action and plenty of overtaking. I probably did more overtaking in that stint than any other. Ciaran did a good job in the opening stint, and I came out in P4 after all the pitstops. I really started pushing and I managed to pull off a couple of great moves.

“I was a bit lucky with Will ducking up the inside of the #56 McLaren and I just managed to cut back on the inside and get the move done for the lead.”

With Tregurtha crashing out later in the race, the result moves Mitchell and Haggerty up to third in the British GT4 Championship, just 19.5 points behind the leaders with four race weekends remaining.

“It’s certainly been a strong weekend in terms of gathering championship points,” Mitchell continued. “We needed this result: another podium, after Rockingham last time out, and to get our first win of the season is brilliant.

“I’ve got to say a big thanks to the Black Bull Garage 59 team. They put in a lot of hard work this weekend because the Ginettas have been really fast. I’m really happy with the result.”
While local companies Thorntons, Close Brothers, Stirfresh, Tunnocks, Celurca Investments and SGM continue their support from last season, Mitchell now has additional backing from Christie Digital and Stampede Global, both of which operate on a worldwide stage.