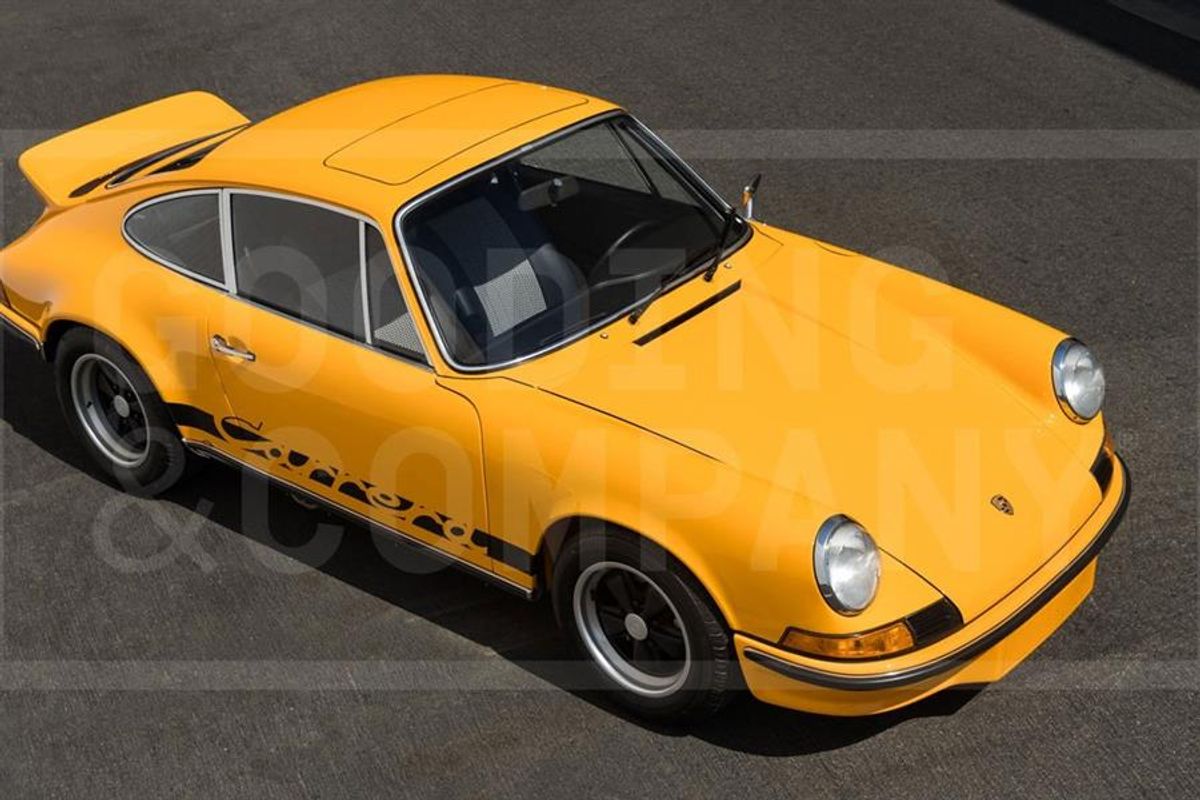 One of the Most Iconic Sports Cars Ever Produced
One of Just 87 Examples Finished in Signal Yellow
Fitted with Rare Factory Sunroof and Desirable Options
Well-Maintained by Marque Specialists
Offered with Books, Tools, COA, Factory Build Sheet, and Extensive Documentation

THIS CAR
By the early 1970s, Porsche’s dominating 917 race cars were effectively banned from competition by both the FIA and Can-Am. Desiring to continue its success in motor sport, Porsche’s competition department decided to produce a series of race cars based on the production 911, the Carrera 2.8 RSR. But in order to homologate the car for racing, Porsche was required to build a minimum of 500 road cars that complied with FIA Group 4 Special GT rules.

The 2.7 Carrera RS – for RennSport, or racing sport – was stouter in almost every way than the 911 S 2.4 on which it was based, and featured an enlarged 2.7-liter engine with Bosch Mechanical Fuel Injection (MFI) developing 210 hp, a revised and stiffened suspension, larger brakes, rear fender flares to accommodate wider wheels, and an unmistakable “ducktail” spoiler to aid high-speed handling. Made available in M471 “Lightweight” and M472 “Touring” trim, the touring model was more luxuriously equipped and practical for road use, while the lightweight model had a stripped interior, lighter windows, and thin-gauge body panels.

When the RS was revealed at the 1972 Paris Auto Show, Porsche’s sales department worried it would not be able to market and sell the necessary 500 homologation units. The RS generated so much positive publicity, however, that the entire first run of cars was sold out within a week, and the company soon committed to manufacturing a second series of cars to satisfy demand. All in all, 1,580 RS models were built by the end of the 1973 model year, with the additional sales leading the company to reclassify the car for the Group 3 GT race category, where it notched several more racing victories and further cemented its legend.

This second-series 911 Carrera 2.7 RS Touring was completed in March 1973 by the Porsche factory in Stuttgart, West Germany, and was optionally equipped with high-beam driving lights, power antenna, loudspeaker, sunroof, and electric windows. Listed within Carrera RS, the authoritative survey of the model written by Thomas Gruber and Georg Konradsheim, this particular car is stated to be one of only 87 examples finished in Porsche’s luminous Signal Yellow hue.

The early history of the car, sold new in Germany, is not well known, but it is believed that the RS was exported to the US by the early 1980s. In 2001, Academy Award-winning actor Nicolas Cage added this RS to his impressive stable of sports cars, and by March 2002, the car was acquired by Stanley Fulton of Potomac, Maryland. Under Fulton’s ownership, Autobahn Service Inc. of Fairfax, Virginia, maintained the Porsche, and from 2005–2008 performed extensive mechanical work to the engine, gearbox, fuel-injection system, and brakes, with receipts of $38,235.87 on file.

In 2009, the RS would pass into the hands of collector Mike Marzon, based in Zürich, Switzerland. Under his care, the RS received additional attention to the brakes and clutch, while specialist Freisinger Motorsport in Karlsruhe, Germany, rebuilt its transaxle.

In 2012, the RS returned to the US and was later sold into a prominent Southern California collection. With a desire to return the car to its original glory, the RS was entrusted in 2016 to award-winning Hjeltness Restoration in Escondido, California. There, a new interior in as-delivered black leatherette with houndstooth cloth inserts was installed, and related electrical and mechanical work were performed, with invoices totaling $60,376.43. Willhoit Auto Restoration in Long Beach, California, carried out corrective cosmetic work on the car’s deck lid and ducktail during the same period for $14,482.50.

Considered the spiritual father of the 911, the late Professor Helmuth Bott once said, “An infallible scale for automobiles with character is the appreciation they receive after their expiration of production.” Today, both in driving and value, the RS is tremendously prized and considered by many to be one of the greatest 911s ever.