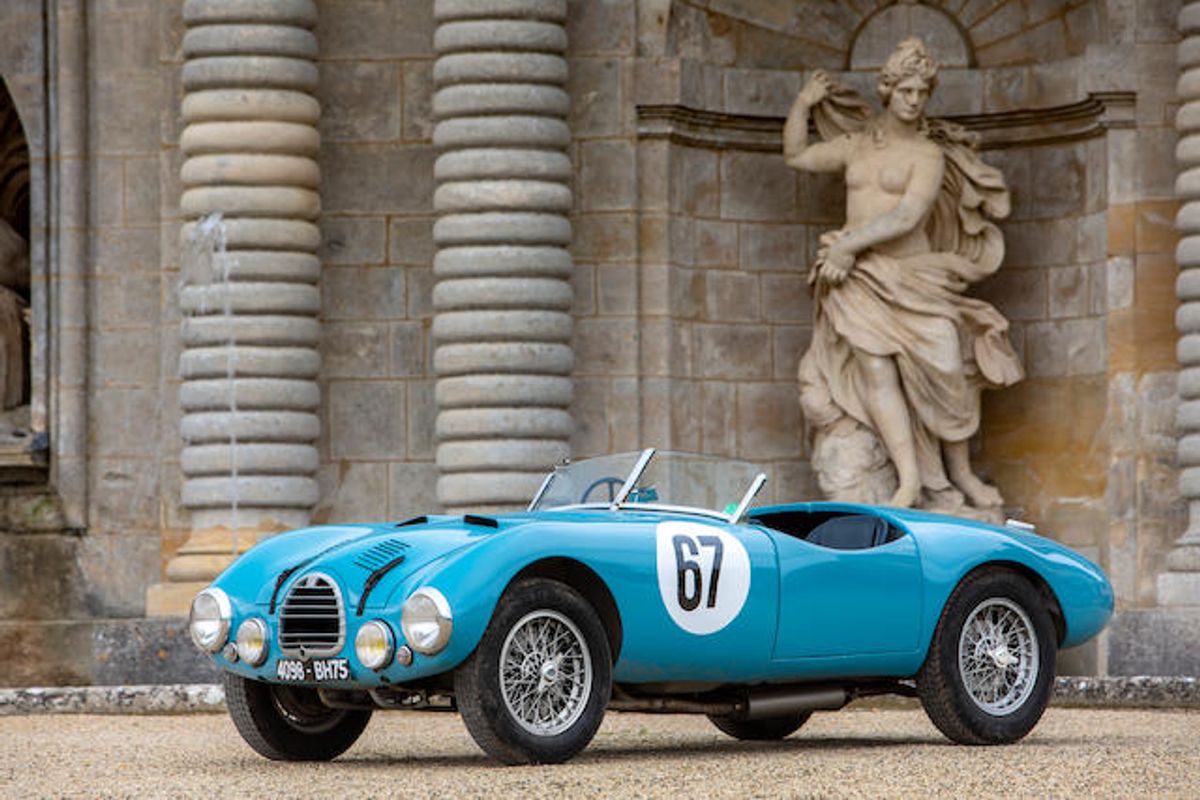 •One of two existing Gordini four-cylinder barchettas in the world
•Raced by J-M Fangio, J-P Wimille, Jean Behra, Robert Manzon and Aldo Gordini
•An exceptional story, track record and history written by Christian Huet
•A unique opportunity for Gordini enthusiasts to acquire one of Amédée Gordini's most legendary creation

They Say:
Like many Gordini barquette sports-racers, chassis number '018' is a former single-seater. Indeed, it is one of the five Type-11 chassis built in 1946 and 1947. A single-seater fitted with a Type-11 engine, '04 GC' was registered in August 1947 as '7090-RQ' but did not enter any competitions that year (probably it was the spare car of Prince Igor Troubetzkoy, driver of Gordini '02 GC').

In 1947, '04 GC' made its first appearance, with a 1,220cc engine, in the Pau Grand Prix, serving as a 'mule' for Jean-Pierre Wimille. It was then driven by Prince Igor in Perpignan and Robert Manzon in Geneva. For the Monaco Grand Prix on 16th May, run under the International Formula for 1½-litre supercharged or 4½-litre normally aspirated engines (similar to the future Formula 1 of 1950), Amédée Gordini entrusted '04 GC', with its normally aspirated 1,430cc engine, to Jean-Pierre Wimille, who had crashed '06 GC' during the first practice session. During the race, Wimille surprised everybody by holding 2nd place until lap 57 when he was forced out by a lubrication problem, handing victory to Farina and his Maserati 4 CLT.

On 18th July, at the Reims ACF Grand Prix, also run under the International Formula, '04 GC' was driven by the future quintuple Formula 1 World Champion Juan-Manuel Fangio, who likewise was forced to retire. Over the 1949, 1950, and 1951 seasons, Aldo Gordini (Amédée's son) drove '04 GC' in 13 races with Type-15 or Type-16 engines and with a supercharged Type-15 C engine in the 1951 Reims race. On 10th September 1951, Jean Behra won the first qualifying round of the Cadours race and secured 3rd place in the final.

For the beginning of the 1952 season, Gordini '04 GC', fitted with a Type-18 twin-cam engine (135bhp at 6,500rpm) was leased to Prince Bira until the Swiss Grand Prix in Bern on 18th May. On the following day, it was totally disassembled in Gordini's premises at 69/71 Boulevard Victor in Paris. All the Type-15 S-specific parts were welded onto the chassis and a new purpose-built barquette (spider) body fitted. This chassis was then renumbered as '18' and received the Type-18 engine (number '21') and was registered as '4098-BH-75' on 12th June 1952, ready to start a new life.

On 14th June 1952, entered by the Gordini Team, the new barquette (left-hand drive with no right-side door) was ready for the Le Mans 24 Hours race, to be driven by Roger Loyer and 'Charles Rinen' (Henri de Clarens). It retired at 18:20 due to a clutch issue. But on 29th June, at the Reims Grand Prix Sportscar Race, Roger Loyer was classified 4th overall and 1st in the 2,000cc class.

Between the 1952 and 1953 seasons, the steering, control pedals, and dashboard were transferred from the left side to right side, and a right-side door fitted. A windscreen and navy blue leather seats were installed, and the body repainted sky blue. At the beginning of April, the Gordini – now called '18 S' in order to avoid any confusion with a new six-cylinder barquette, also numbered as '18' – was shipped to New York to be shown on Luigi Chinetti's stand at the Motor Sport Show in the Grand Central Palace, from the 4th-12th April 1953. Unsold, it returned to France where it was entered in the Le Mans 24 Hours by Captain Marceau Crespin.

On 5th June, the 1,491cc Type-18 engine number '25' was checked by an ACO-recognized inspector and on 9th June, the chassis number was checked. During the first hours of racing, the Gordini was timed at 118.5mph on the Hunaudières straight, but at 20:42 a piston failed and the car had to be withdrawn.

On 21st June 1953, '18 S' was entered by the Gordini Team in the AC du Nord in Roubaix for the Argentinian driver Roberto Mieres, still with engine number '25'. In this handicap race, the Gordini was classified 2nd ahead of some Maseratis, Porsches, Aston Martins, OSCAs, and Jaguars. Two Irish spectators, Redmond Gallagher and his brother-in-law Dermot O'Clery, the owner of Dean's Grange in Dublin, were impressed by the Gordini's performance and handling. They asked Jean Lucas, the manager of the Gordini Team, to arrange an appointment with Amédée Gordini. On 26th June in Paris, '18 S' was sold to the Irish garage for 2,600,000 Francs (the price of an Alfa-Romeo 1900), with its windscreen for the two-seater barquette, and a fly-screen and a left-seat fairing for the single-seater.

After a major overhaul, the body was painted in dark green with an orange strip all around its lower part - the colours of Ireland. On 22nd August, entering Gordini '17 S' barquette in the Goodwood Nine Hours race brought the opportunity to deliver '18 S' to its new owners. The two Gordinis were driven by Jean Behra and Harry Schell from Paris to Cherbourg where they boarded for Portsmouth. Gallagher took delivery of his new car, which was registered as 'RIK-939'.

On 5th September 1953, the green Gordini was entered in the Dundrod Tourist Trophy, in which Gallagher and Cahill were classified 10th overall and 1st in the 1,500cc class. In 1954, Gallagher was classified 5th at Oulton Park, 15th at Silverstone, 1st in the Wakefield Trophy and 7th (1st in the 1,500-cc class) in the Dundrod TT. For these races, the engine was fitted with four Amal carburetors. In May 1955, Gallagher placed an advertisement in the SCCA (Sport Car Club of America) journal in order to sell it, with its original twin-choke Solex carburettors and various additional parts. He did not find a buyer in America but did find one in Dublin, Colonel John Burk, who bought the car and had it repainted sky blue. He took part to a few races, among them the Tralee hill climb on 10th August 1963. In 1967, he sold the car to Colin Crabbe, owner of the Antique Automobiles garage in Baston. An advertisement placed in the October 1967 issue of Motor Sport featured Gordini '18 S', but with no price. Tony Gosnell, a car collector from Farnham, England, bought it but did not use it.

In 1978, Tony Gosnell placed an advertisement in the February issue of Classic Cars. Jean-Louis Hamoniaux, a Gordini enthusiast from Allonnes, near Le Mans, called Gosnell who told him that a buyer was coming to take it! A month later, Hamoniaux again called Gosnell, who explained that the transaction had not taken place, and that the car was still for sale at the equivalent of 50,000 Francs (the price of a Citroën CX Pallas). Hamoniaux then asked Amédée Gordini and Christian Huet to go to England with him in order to examine and assess the coveted Gordini. In April 1978, in his Renault 16 TX, Amédée Gordini drove Hamoniaux, his wife Anaïck, and Christian Huet to the Gosnell brothers.

'18 S' was not in a running condition but it had not undergone any major modification, apart from the rear brake drums and a front suspension cylinder, which had been replaced, and the lower fly-screen, which had been lost. Hamoniaux bought '18 S', which in July 1978 went back to Gordini in Paris while the house he was building was finished; the car would then be kept in its garage. Amédée Gordini still owned the original 1952 registration certificate in his name, which he wished to keep. He asked Christian Huet to have it duplicated by the Paris Préfecture of Paris so that he could offer it to Hamoniaux.

On 25th May 1979, the very day Gordini died, Hamoniaux took possession of his Gordini, '18 S'. Afterwards, Hamoniaux was not, financially speaking, in a position to restore the Gordini. It was not until 2005 that Jean Sage provided funds for the car to be restored by Corrado Capello in Zané, Italy. Thus he could share with Hamoniaux his passion for driving a Gordini: handling, steering accuracy, engine torque, and so on. Bucket seats replaced the original leather seats, which had been sold with the car. Together, they took part to the Mille Miglia, Monaco Historique, Le Mans Classic, and so on. When Jean Sage died in October 2009, Hamoniaux retrieved Gordini '18 S' and took part in some static events dedicated to collectors' cars.

Gordini '18 S' will enable its new owner to take part in the world's the most prestigious historic races and events.

AFTER BEING TRANSFORMED INTO A "SPORTS" BARQUETTE – CHASSIS No. 18 S