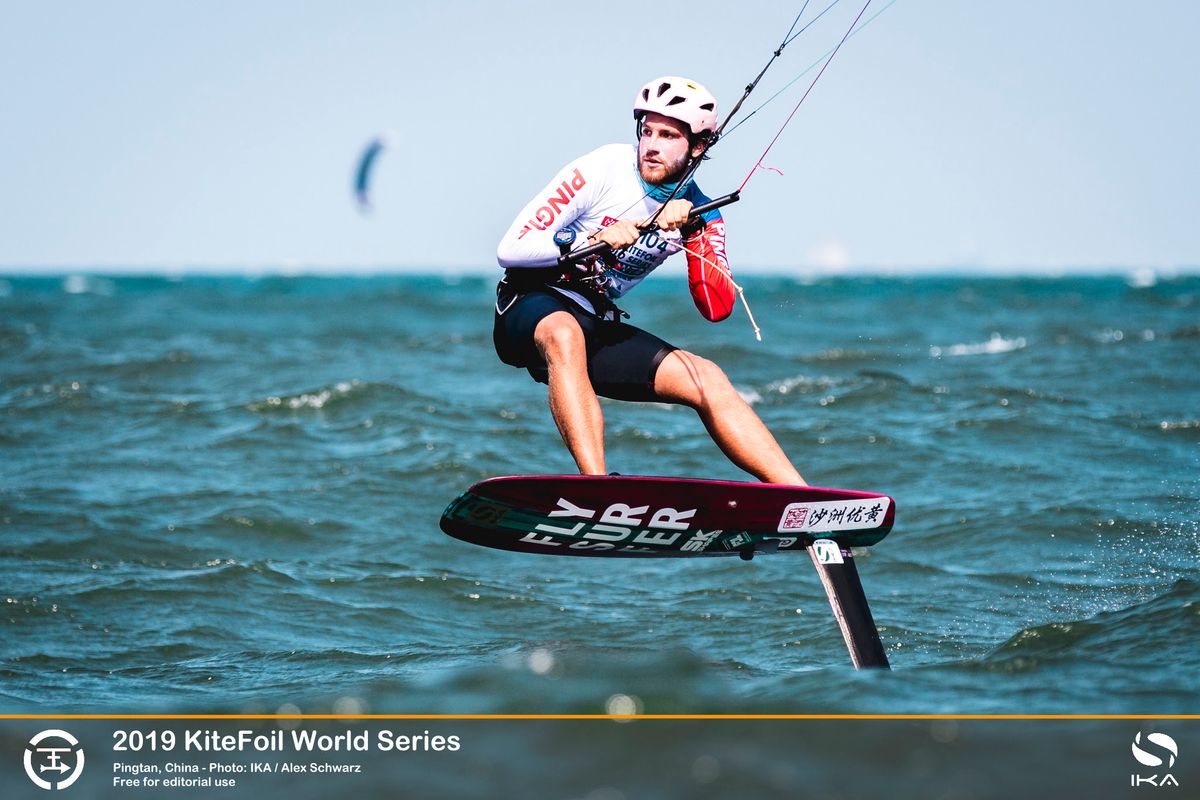 The Slovenian teenager leading the KiteFoil World Series tour reasserted himself in formidable fashion to go top of the standings at the third stop in Pingtan, eastern China, in testing conditions.

But while Toni Vodisek, 19, opened his day’s account with three flawless bullets on the windward-leeward Yellow Sea track that left the world’s fastest kitefoilers in his wake, he did not have it all his own way.

With his distinctive fluorescent orange helmet and board, Vodisek appeared to have the day’s penultimate fourth race in the bag, too, after leading for most of the way round the course. But he misjudged a gybe allowing France’s Axel Mazella the inside track on the last downwind leg, giving him the bullet.

Worse was to come. After a mistake on the upwind leg he found himself trailing in the punchy north-easterly 18kts to 20kts breezes, but then crashed a gybe hard on the final downwind leg, an error blamed partly on a borrowed harness after his own broke earlier.

Nonetheless, an ebullient but exhausted Vodisek comfortably tops the leaderboard on the second of the five-day regatta—with its purse of $40,000—which will set the stage for the climactic fourth act of the series on the Italian island of Sardinia next month when the men’s and women’s world champions will be crowned.

The reigning International Kiteboarding Association (IKA) KiteFoil women’s world champion, the US’s Kirstyn O’Brien, hit her stride again in the favoured stronger breezes that match the conditions she trains in, enabling her to outpace former world champion Russia’s Elena Kalinina on the track and the leaderboard.

“I finished in front of [Kalinina] in every race,” said O’Brien. “These conditions are really fun for me. With the swell and being really windy, there are so many more elements. And the one important thing is learning how to keep my board when I crash. That makes a big difference.”

Women’s leader, Formula Kite world champion Daniela Moroz (USA), does not usually have such problems, though she suffered an unusual disqualification for being over the the start line early in the day’s third race as she battled in the 27-strong mixed fleet, yet still sits eleventh overall.

It was the powerful Vodisek’s heroics that captured the imagination, though. Riding his white Ozone R1V2 15m kite, larger than most rivals on 13m or even 11m kites, Vodisek battled to hold the kite on the upwind legs, only to “smoke” opponents with better angles and searing pace downwind and leave them trailing over the track’s two laps.

“I crashed the last gybe in the last race, and it cost me,” said Vodisek. “But that’s OK. I can discard that score. I was on the 15m and finished all the races on it. Being able to hold a stronger kite really is a benefit for me. But now I want to die and go to sleep.”

Slightly adrift of Vodisek, Croatia’s Martin Dolenc seemed to find his feet on day two and and moved up the order to seventh spot overall courtesy of a raft of good finishes, including a third in his opening foray.

“I was on a 13m kite and it’s really powerful in these conditions,” said Dolenc. “I was a bit scared of it at first, but got used to it. I noticed the others changing down after the first race, but Toni Vodisek stayed on his 15m so I decided to stick with the 13m.”

Dolenc ended the day just ahead of Ejder Ginyol (TUR), who also opened his day’s account with a fourth spot that helped him climb the leaderboard, keeping in the top ten.

“It’s very gusty and it’s very choppy,” said Ginyol. “It’s a bit in the big boys’ territory. But it’s good and it’s fun. My aim is just to keep myself in the top ten. Let’s see what happens.”