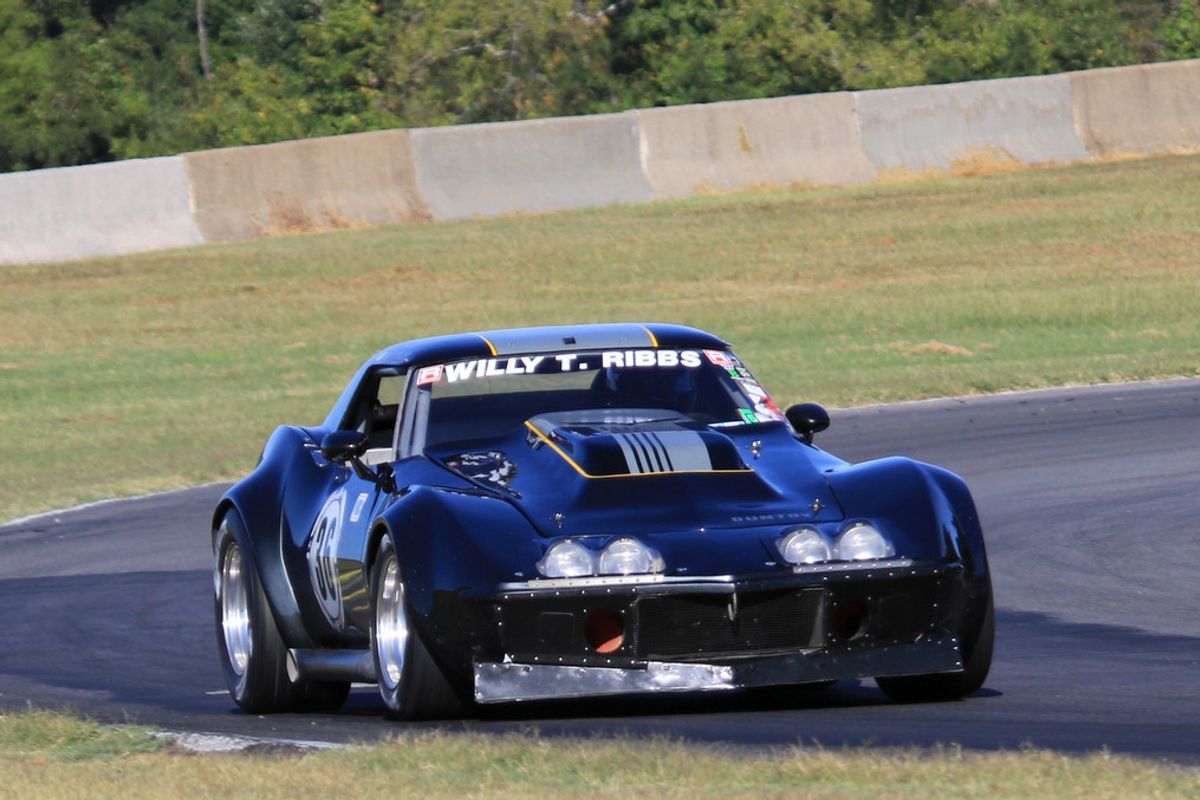 The final round of the Vintage Race of Champions (VROC) presented by Chopard Watch at Virginia International Raceway (VIR) was action-packed with a good dose of surprises.

Todd Bodine stormed to the overall win with Bob Lima in the latter’s small block (355 c.i.) B Production (BP) 1969 Corvette after Ribbs’ car, also a 1969 Corvette, broke traction on VIR’s “Roller Coaster” between turns 14 and 15. Ribbs recovered for the A Production (AP) win and with co-driver Ed Sevadjian nailed down both VROC series championships for the class.

“There’s no doubt you give up some horsepower running B Production,” Bodine said, dripping wet with Glenora Sparkling Brut Wine and perspiration after an inspired podium celebration. “But this car really handled. I think I was getting off the corners better than anybody.”

“I was sliding all over the place,” said Ribbs. “Bottom line, the way race shaped up, we knew we had the championship if we just finished. I’m so grateful to work with the Duntov team, they had that car working like a Chopard Watch all season long.”

While John Cloud was clearly the amateur BP champion, the contest on the professional side proved to be an impossible call. Davy Jones and Wally Dallenbach Jr. delivered nearly identical results to conclude the season knotted up at 25 points and making tie-breakers for most wins and highest average finish useless. The two drivers both scored podium finishes during the year with Dallenbach third today and Jones bringing Shannon Ivey’s 1967 Camaro home for the final podium step at the Indianapolis Motor Speedway last month. Both received Chopard Watches for their efforts, as did all the season champions.

The race and indeed the entire weekend were a struggle for almost half of the 15 teams who took the green flag. Boris Said got off course in Friday pro practice which pulled loose an oil line that hosed down the track. First on the scene was Al Unser Jr. in Colby Hillman’s 1969 Corvette and spun into rough trackside terrain. The result was damage to the front and underside of the car that required repairs impossible to complete before race time. As for Said’s team, car owner and co-driver Jim Caudle and his mechanics thrashed into the wee hours to install a new engine. Peter Klutt, in his Legendary Motor Car Corvette also had a costly excursion that not only damaged the front of the car but also inflicted a hairline crack in the transmission housing that required some brinksmanship to make the starting grid.

An even closer call came when Big Machine Records CEO Scott Borchetta also bounced through the landscape during early Saturday morning practice in his red 1972 Corvette that he was sharing with Bobby Labonte. The car also suffered transmission damage that necessitated a swap. It wasn’t until literally the last moment before the command to start engines that the car was in place. That Saturday session also produced some close calls as Pat Sessions, Unser’s new co-driver, cracked the fiberglass of his 1963 split rear window Corvette. John McCormick inflicted similar damage to the Ford Cobra he shared with Donnie Beechler. Duct tape applied, both cars came to the green flag worse for the wear, but game for competition.

Aside from Ribbs’ late race scare, he and co-driver Sevadjian had everything go their way as all three of their AP rivals suffered mechanicals. Ribbs’ closest threats in the championship were Skinner and Labonte, both of whom suffered early outs, finishing third and fourth out of four entries in the class. The only other AP car running at the end was Klutt’s Corvette in the hands of Geoff Brabham. Sometime after the mandatory five-minute pit stop for driver swap the alternator in the Legendary Motor Car entry malfunctioned, slowing the car considerably.

In the BP race Jim Caudle’s car retired early on, costing him an excellent chance at the trophy for the amateur championship. Co-driver Boris Said was also in the hunt on the professional side, but all of that was dashed as they could never get things fully sorted after their engine issue. Beechler and McCormick also went behind the wall early as the entries with professionals Chris Dyson and Mark Dismore stumbled as well. The two youngest drivers in the field, Jeb Burton and Mike Skeen, completed the BP podium behind Bodine.

By all measures, the first VROC season championship was an unconditional success. The vibrant atmosphere at VIR provided clear evidence the series has the attention of race fans. It lived up to its aspiration as a race for legends, attracting champions from across all branches of the sport, from the Chili Bowl to Formula One. It also lived up to its racing for a purpose mission in gifting nearly $100,000 to charity this year alone, including over $20,000 for IGNITE – the Autism Society of North Carolina, the beneficiary at VIR.

Ribbs summed up the feelings of all the drivers, saying, “It doesn’t matter what series you’re in, competitors want to win championships, and that’s what we did today.”