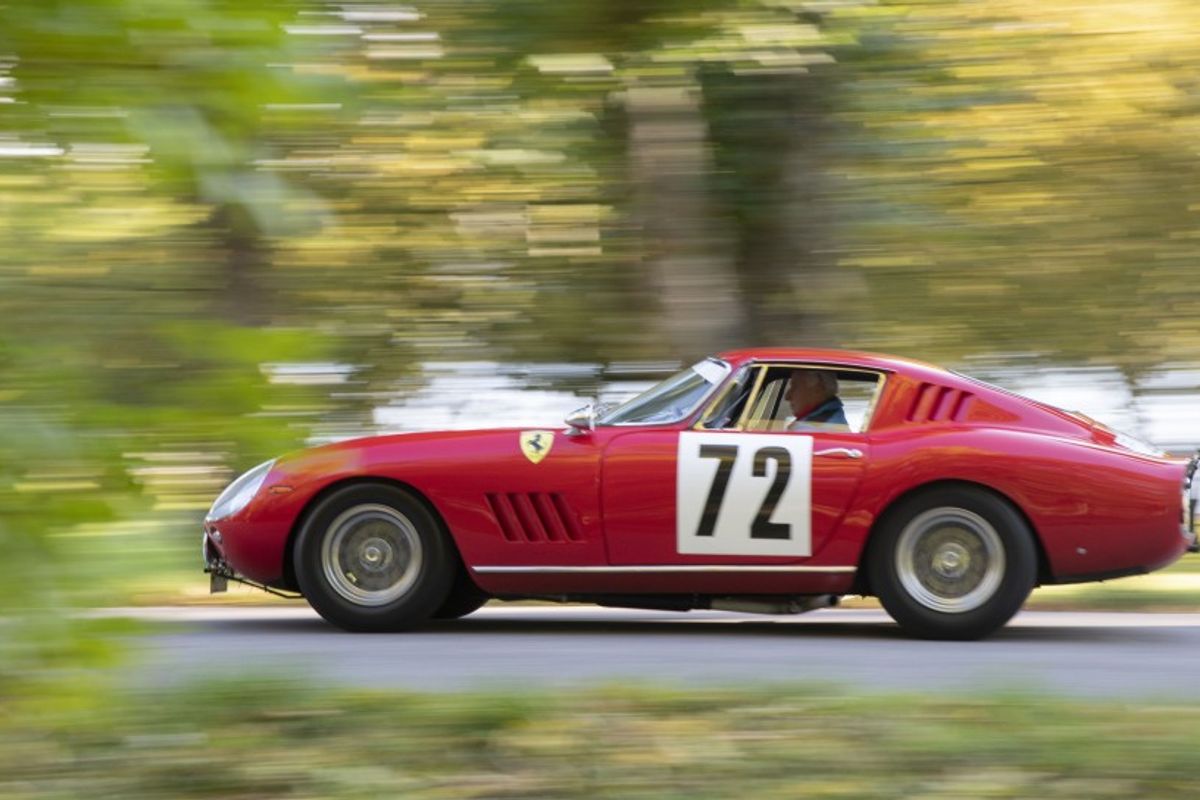 - Incredibly rich history
- Over 40 international races in period
- Impressive preserved condition, original engine
- Extensive documentation
- Winner of the 1966 Monza 1000 km GT class, one of the most raced 275 GTB in Period

Monza, 25 April 1966, 13.00 hours: the 1000 km was about to start in heavy rain. On the front row, the Ferrari 330 P3 of John Surtees and Mike Parkes alongside the Ford GT40 of Peter Revson and Skip Scott : rivalry between the two constructors was fierce, and after Ford's victory at Daytona and Sebring, the Scuderia wanted revenge before the 24 Hour race at Le Mans the following month. The list of the forty or so participants included the best international drivers, amongst them Bandini and Scarfiotti in a Dino 206 S, Attwood and Piper in the same model, Mitter and Hermann in a Porsche 906, Jaussaud and Servoz-Gavin at the wheel of a Matra-BRM while the Ford-France GT40 was in the hands of Greder and Ligier... Also lining up for the start: 4 Ferrari 275 LM, 1 GTO 1964, Shelby Cobra, Alfa Romeo TZ, Bizzarrini, Porsche 906 and 904, Alpine and Abarth. Two-thirds of the way down the grid was n°16, the Ferrari 275 GTB of Siegfried Zwimpfer and Hans Illert. At the end of the gruelling 6-hour race, contested in pouring rain, the Ferrari of Surtees and Parkes triumphed over the seven Ford GT40s. It was the Italian marque's day as Ferrari also took the over 3-litre GT class, with the car driven by Zwimpfer and Illert.

Siegfried Zwimpfer had acquired this Ferrari 275 GTB (chassis n°6785) the previous year. He took delivery on 29 April 1965, the day after completing the customs paperwork with Peter Monterverdi's Ferrari garage in Bâle-Binningen. The car was built to the order placed by Zwimpfer, featuring two special options : Standard Borrani wire wheels and with six carburettors (rather than the standard three). It was painted red (no.199374) with beige (no.3218) Connolly leather upholstery, as stated in the build sheet dated 29 December 1964, which also stated the car was built in January 1965 and was the seventy-ninth 275 GTB produced. It was registered NW 1564.

Siegfried Zwimpfer, from Switzerland, was passionate about motorsport and started racing in 1960, aged 30, in a Porsche 356. Three years later he bought a Chevrolet Corvette Sting Ray to compete in. There are photos of him taking part in the Ollon-Villars hillclimb in 1963 and the Prix de Vienna in 1965. He then began using the Ferrari 275 GTB on offer, before moving on to a Porsche Carrera 6 during the 1968 season. Zwimpfer was in many ways the archetypal amateur driver. He succeeded in getting a sponsorship deal with Valvoline and travelled to the European races in a Ford Galaxy painted in Valvoline colours, towing the Ferrari on a trailer. His life was like an automotive " Continental Circus ".
It is probable he had his Ferrari race-prepared at the garage in Feldmeilen, near Zurich, run by Hans Illert, his co-driver at Monza. To reduce weight, part of the interior was removed. Siegfried Zwimpfer used the car until October 1967, taking part in seven competitive events during 1965, sixteen in 1966 and thirteen in 1967. Most of these were international meetings including hillclimbs at Cesana-Sestrières, Ollon-Villars, Mont Ventoux, Sierre-Crans Montana and Trento-Bondone, as well as circuit races at Monza, as mentioned above, Hockenheim and Innsbruck. At the end of the 1966 season, he was crowned Swiss Mountain Champion in the GT class. In March 1967 he took part in the Rallye Lyon-Charbonnières-Stuttgart Solitude but unfortunately went off the road and was forced to retire. This rally took place during the rivalry between Porsche and Alpine, and once the two factory Alpines had retired, it was the Porsche 911 of Vic Elford that won the day. The Ferrari suffered damage to the rear, but the front wing was also slightly affected and the wheel arch was repaired at that time using metal from an oil can, a repair that subsequent owners have studiously kept on the car.

In October 1967, Siegfried Zwimpfer sold his Ferrari to Pierre Sudan, his co-pilot at Monza in April 1967. Sudan was a Ferrari/Mercedes/Maserati dealer in Zug, Switzerland who is fanatical about Ferrari and has owned several 250 GTOs and 275 GTBs over the years. He registered this car ZG 2 and took part in various hillclimb events and the Monza 1000km 1968. The 275 GTB berlinetta continued to be looked after at Hans Illert's garage (by the same mechanic, Heinz Duss). Unfortunately while it was being transported to Belgium, it fell off the truck. Sudan had it repaired, and then sold it at the end of 1968, for the sum of 14 000 Swiss francs, Sudan sold it to Mr R. in Switzerland and thereafter it went to Dutch dealer Robert de La Rive Box who re-sold 06785 to a Mr W in the canton Vaud in Switzerland, where it was registered on Swiss license plates VD 44175. In August 1984 it went to Mr C. W., from the Fluela garage in Davos. The registration then changed to GR 2701.

Many years later, on 23 March 1994, Mr W. sold the car to Gregor Wolf (of " Outils Wolf "), who lived in Betzdorf in Germany and Bulle in Switzerland. He had the car registered FR 73390. The 275 GTB was spotted at a Formula 1 race at the Nürburgring in 1999 and later in the year, it was offered for sale by renowned Ferrari race car specialist, Modena Motorsport.

On 14 February 2000, it was bought by the current owner, an architectural model maker and car enthusiast who has owned some lovely automobiles over the years (Dodge Challenger, Jaguar E-Type, Ferrari 330 GT ex 1965 Geneva show car, Aston Martin DB4).
Being a talented driver, he was planning to enjoy his retirement by competing in the 275 GTB in various historic events. However he finally decided not to risk damaging a car with such an important history which is why he is now selling it. This has not prevented him, with the help of Swiss Ferrari historian Marcel Massini, to make contact with the car's previous owners and devote twenty years to gathering a huge amount of documentation on the Ferrari's past : the period customs clearance certificate, photos, race programmes, original entry sheets, correspondence, magazines... These precious items allow us to track the life of the car in detail, particularly its competition career. He also made a list of the many books and publications in which 275 GTB n°6785 has appeared

This 275 GTB is presented in its Rallye Lyon-Charbonnières configuration. The bodywork and interior are in original condition, the patinated leather interior is now black, while the car has benefitted from a thorough mechanical restoration, to ensure it is in full running condition. The original engine has been rebuilt using some mechanical parts supplied mainly by Piet Roelofs, GTO Engineering, Maranello (pistons, conrods, camshafts and bearings) but it would be easy to restore the original configuration if required. We invite interested buyers to consult the file which details the work carried out. In addition, the car sports a few scars from its competition career in the hands of enthusiast owners. We have already mentioned the repair to the wheel arch, but there is also the ignition key that has been moved to the right on the special wood dashboard, the left-hand side of this dashboard is distorted where Zwimpfer hit his knee against it at Monza in 1966, the righthand door handle has been repaired with an external screw and there are rubber straps on the boot…The car has a side exhaust, its original 1966 Competition Borrani wheels (Zwimpfer put them on the car before Monza 1000km in 1966, rediscovered in 2013 ) and has the unusual feature of grey headlight bowls. In addition to the documentation already mentioned and a historical summary by Marcel Massini, the car comes with its original toolkit containing a hammer for the spinners that is mis-shapen through extensive use and an original jack.

It is incredibly rare to come across a Ferrari 275 GTB with such a full and well documented history as this berlinetta. There have been a small number of owners, all connoisseurs, who have understood the importance of respecting the car's historical integrity. It is not a "concourse queen" but a car that has lived a full life as Enzo Ferrari intended, driven for the glory of motorsport. History cannot be made up and it is its history that makes this car stand out and gives it an extra special appeal.