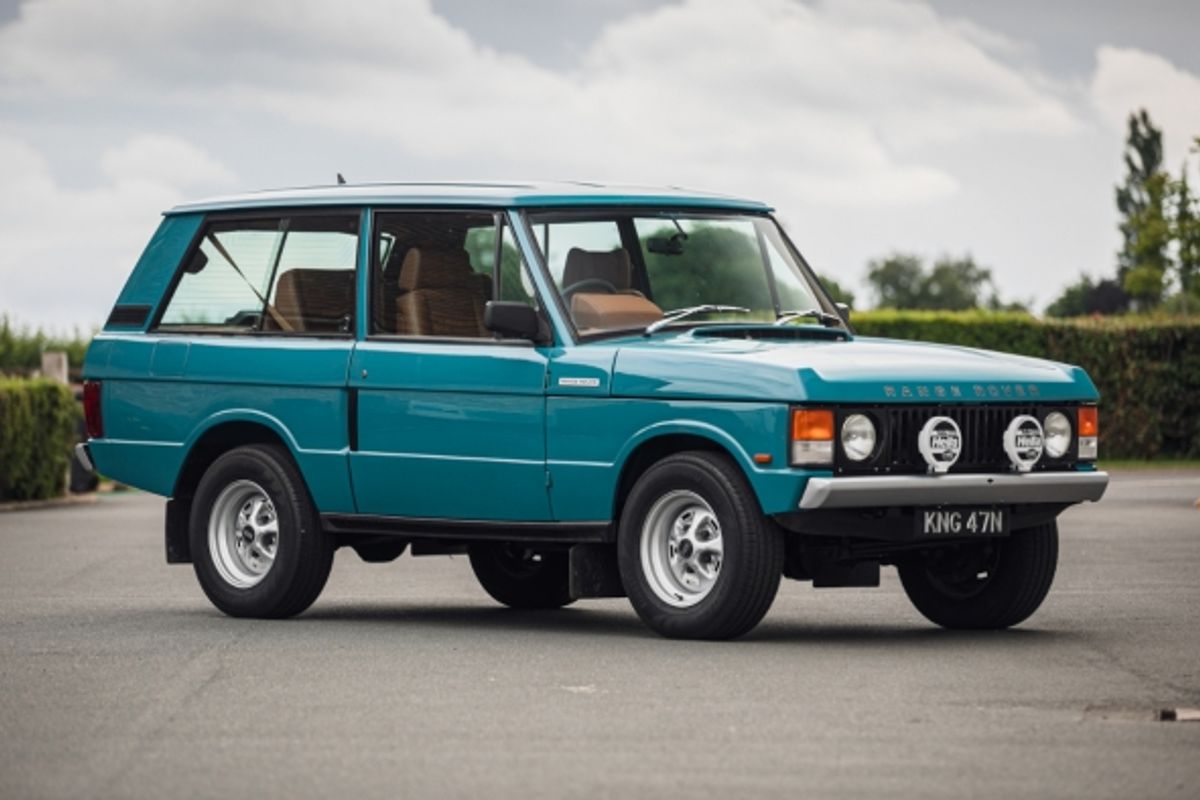 This week’s release sees us focus on some very prominent cars which have made their mark in the history of the automobile and come with superb provenance. But it is not just cars featuring in this weekend’s auction, there are registration numbers, automobilia and a boat.

Talking of boats what a superb offering this is – Lot 414 is the 1995 Sunseeker Tomahawk 41 13M which was owned by the actor and original James Bond star, the late Sir Roger Moore KBE. Estimated at £65,000 to £85,000, he owned this powerboat for over 10 years from new and kept it in Monaco and the French Riviera. He named the boat K after his wife Kristina Tholstrup, who bought it for him. This is a very compact yet efficient powerboat with all the facilities you could desire accommodating up to 9 people in the cockpit and has a double helm seat. Sir Roger wasn’t happy with the power that K originally came with and had them replaced with a pair of Cummins 6BTA 250hp engines capable of a top speed of about 31 knots and a cruise speed of 25 knots. With so much history and letters proving ownership, this is a very graceful boat capable of carving through the seas with grace and purpose.

Lofty England is a very well-known name in the automotive industry, he joined Jaguar as Service Manager and went on to become team manager leading the Jaguar team in motorsport. After the team was wound up, he returned to the factory as Assistant Managing Director in 1961 and then succeeded Sir William Lyons as Chairman and Chief Executive. This 1967 Jaguar E-Type  Series I 4.2 2+2 Overdrive is a very important car, not only owned by Lofty England, it was a factory-built experimental car and the only one fitted with overdrive which was allocated to Lofty himself as the first owner. A gem of an E-Type, with such historical provenance, it has 63,000 miles, a Jaguar Heritage Certificate and looks wonderful for its age having been well looked after. Estimated at £45,000 to £50,000 and includes the registration number, 2 MXN.

The two-door Range Rover is now becoming very desirable and this year it is celebrating its 50th anniversary. Jamiroquai frontman, Jay Kay, known for his extensive and exotic classic car collection is offering this very unique 1992 Range Rover 4.5 SE KR Retromod direct from his collection. Estimated at £130,000 to £150,000 this unique two-door Retromod is from marque specialists Kingsley Cars of Witney. Formerly owned by the company Managing Director and then owned by Jay Kay it is based on a standard SE, which has been fitted with a 4.5-litre V8 engine. Known for their high-quality work Kingsley Cars have transformed this classic into a modern and sensationally looking 4x4 with lots of traditional features yet keeping it modern with additional refinements such as USB ports. This car has had extensive coverage in the press and is described as The Ultimate Classic Range Rover. If you fancy something else from Jay Kay’s collection, Lot 600 is his stunning 1985 BMW 735i with 18,608 miles or Lot 601 a 1998 Ferrari 355 Spider in manual, again in stunning condition.

The 190E from Mercedes-Benz has had some serious upgrades over the years, transforming the basic model into a serious powerhouse. Silverstone Auctions have three different versions of the car on offer with Lot 615 being the 1985 190E Cosworth estimated at £50,000 to £60,00, then Lot 606 a 1989 190E 2.5-16 Evo I at £80,000 to £90,000 and finally the super rare 1992 190E 2.5-16 Evo II at No Reserve yet guided at £165,000 to £190,000. The basic version, if you can call it that only has 12,745 miles, is in right-hand drive, comes with a detailed history file and is in remarkable condition. The Evo I is one of 502 produced as a homologation car for the 1990 DTM season and comes with a certificate confirming the AMG Power Pack, this is an incredible car. The third of our trio is the Evo II which we have touched on in an earlier release, but such is the rarity of this car we could not remind you about it. It is one of only 500 built and with one owner for 30 years, it comes from a significant private collector. If you love your Mercedes-Benz you now have the opportunity to acquire not one but three of there super special and rare cars.

And our final two cars in this release are from Ford, one is Lot 609 a 2010 Ford Focus RS with just 992 miles on the clock from new. Estimated at £30,000 to £35,000 this Ford is barely run in and has one registered owner making it a very desirable hot hatch. Ford are known for their high-performance cars and none better than the Sierra Cosworth. This model was created to satisfy the homologation requirements of 5,000 in order to go into competition and despite some concerns, the car did extraordinarily well and has now become an iconic model in the company’s history. Silverstone Auctions are offering this 1987 Sierra Cosworth with just 8,457 miles from new and from a private collection for an estimated £65,000 to £75,000.

“We are delighted that Jay Kay is entrusting three cars from his extensive personal collection. The Range Rover is something very special.”

“There is still time to book an appointment with one of the team and view any of the 226 lots we have on offer.”

They can be contacted on 01926 691141 or email enquiries@silverstoneauctions.com